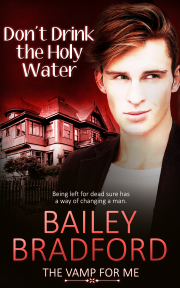 Book 4 in the The Vamp for Me series

Being left for dead sure has a way of changing a man.

All West wanted was one night of fun. He’d taken on the responsibility of raising his younger siblings after their parents died, had done so out of love, but he was a young man and he just wanted a chance to live like one for a few hours.

It almost cost him his life. It certainly meant his life was changed forever, and along with his life, the lives of his siblings. They were all exposed to a secret world they’d never known existed. Vampires.

Human children living alongside vampires…seemed unusual. Claude, the coven leader who saved West and his brothers and sisters, doesn’t have accommodations for kids. He finds one coven in the country that does, and sets about making a home there for West and his family. Before he sends West away, West meets an intriguing man, Axel, whom he encounters again months later. The attraction between them is strong, but there is more to consider than just how sexy Axel is.

Nothing in life is easy, whether you’re a vampire or a human.

Publisher's Note: This book has previously been released on the author's blog.

Excruciating pain filled West so completely he couldn’t even scream. Every nerve-ending in his body burned as hot as the sun, and agony rolled through him in waves without a second’s relief.

Images flashed through his head, fangs, glowing red eyes, horns and wings—those wings, God but he could hear them, a creaking, sticking-together sound even as they were flaring out behind his attacker.

West couldn’t tell the present from the past. The bits and pieces that were bouncing around in his brain weren’t coherent.

Fangs, wings, glowing eyes? He was hallucinating, and he wished that the pain was a hallucination too.

He knew it wasn’t. That kind of suffering couldn’t be imagined. West had never been given to daydreaming and fantasizing anyway. Not more than any sexually frustrated young man his age, and likely much less so, given his responsibilities.

His responsibilities— West tried to shout for his brothers and sisters. The pain he’d felt before then doubled. Something horrific was wrong with his throat, and he wept as blessed darkness pulled him down.

But his sleep held no comfort. There, he still couldn’t escape the evil that seemed to be surrounding him. He heard laughter, bitter, hateful laughter that made him believe Satan existed. Before that moment, he’d assigned all evil behavior to humans rather than some spiritual force—now he doubted that. Something very evil did exist, and it’d come for him in a dark alley.

It was what he got for acting like a whore.

That simple truth resonated in him, until all he could hear was the laughter and the word whore, as a deep sensation of loss permeated his soul, or what used to be his soul.

West heard them first, the soft voices, murmured words, then he dared to open one eye enough to peek. He caught a glimpse of four strangers, all males.

One kept drawing his gaze. Tall, dark-haired, very refined in appearance, wearing a nice suit. There was a tug at West’s gut when he looked at that particular man. It was unnerving, but better than the agony West had been suffering.

He closed his eye and did a quick mental examination of his body. He was stiff, his muscles ached, but there was nothing like that bright, hot pain he’d been immersed in.

When he swallowed, his throat still felt raw, much like when he’d had strep as a kid.

Maybe that’s what happened. Maybe I got sick. I could be in the hospital—

West shut off the delusional bullcrap. He wasn’t in a hospital. Those men weren’t doctors. He didn’t know who they were, what they wanted with him, but he’d been attacked, and had things done to him. The pain hadn’t been imagined, and he heard that rough, hateful laughter every time his heart began to pound. The men’s voices filtered through regardless.

“Augustin, perhaps you could get a glass of ice?”

A much put-upon sigh sent a shiver down West’s spine.

“Augustin, please. Ice can be used to sooth a dry throat.”

West had no idea who anyone was, and could only put a name to one voice, that of Augustin. He listened intently for footsteps and heard only one set. His hearing seemed to be very clear for some reason. There was the whisper of a door opening, then the soft click as it was closed.

“You can keep your eyes shut if you prefer, West. It is understandable to want to hide from what has happened.”

West bristled and before he knew what he was doing, he’d pried both eyes open. He found himself glaring at the attractive man in the suit. Just as quickly as his anger had welled up, it vanished. He wanted to please the man speaking to him, and an incomprehensible hunger was forming in his gut.

“It’s the need to feed. I can help you with this, but soon you will have to take your sustenance from another. I cannot bond with you more than I have by making you.”

Bond with me? “What—” West closed his eyes again as fiery pain filled his throat. No speaking until that part of him was healed up.

“I have a mate, and so I will not take another lover. You will find that you want to please me, and want me in a sexual way, but that will ebb. It is the bond between a sire and his fledgling. Once you have sorted out what has happened to you, you will be able to control the impulses you are now feeling.”

What West was feeling was sheer terror. The whole wanting anyone in a sexual way brought back vivid memories of being attacked. He didn’t know all of what had happened to him, which was both more terrifying and relieving. He wasn’t sure he wanted to know.

Something wet and warm plopped onto his lips. West didn’t question—the need was too strong. He opened his mouth and coppery liquid dribbled in.

Some part of him realized it was blood and recoiled, but the rest of him rejoiced as he grabbed at the arm pressed to his lips. He opened his eyes the moment he began to suck like a hungry baby, pulling in long drafts of blood.

West told that voice to shut up. He moaned as he swallowed, the blood coating his sore throat, the taste of it bitter yet sweet as honey.

He couldn’t look away from the intense gaze of the man he was feeding from.

“You are scared. It will get better. I wish there had been another way, but…” The man shook his head slightly. “You have had enough. Find your control, find your core, and cleave your way to it. You haven’t lost the essence of yourself.”

West wanted nothing more than to make the man proud of him. The hunger in his belly was gone, his throat hardly hurt. He disengaged his fangs—

“No!” West shouted, grabbing his head with both hands.

How had he become the thing from his worst memories?

Ms. Bradford hit it out of the park with Don’t Drink the Holy Water~ introduction of new characters, seeing old friends, and new and interesting story lines.

I thought this story was cute and another really good addition to this series. Axel was so sweet and you could feel how much he really cared about West. Y...

Share what you thought about Don't Drink the Holy Water and earn reward points.

This isn’t a new subject. I believe people have been inspired by nature since humans came into existence. Maybe they weren’t writing odes to the sun or moon, or singing songs about the wind caressing their skin, or drawing pictures of mountains and streams and so on. However, I like to think that mankind has always been able to stop and appreciate a glorious sunset or a starlit night, among other beautiful offerings that abound in this world.