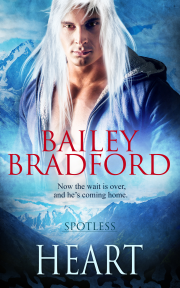 Book 4 in the Spotless series

Rolly has waited ten years to claim his mate. Now the wait is over, and he’s coming home.

Rolly has waited patiently for his mate. When he first met Erdwin, the boy was still a child. Rolly felt nothing but compassion for him back then, but Erdwin came of age five years ago, and Rolly’s stayed out of his life in order to give Erdwin time to experience life.

Erdwin never fit right in his skin. He didn’t like what he saw in the mirror. It didn’t match how he felt inside. As a shifter, he was stuck with the body he had. Surgery wasn’t an option for him. But Erdwin found a way to accept himself—by embracing the part of herself that felt like her true nature. She struggled with it, but with her family’s support, she became Edie, the young lady she was meant to be. She stopped worrying about her parts, and concentrated on her heart.

When Rolly, a powerful shaman, moves back home to the pack, Edie is transfixed. He makes her nervous—and arouses her. But what would a man like him think of a woman like her?

Edie’s about to find out, and she will have to be stronger than ever to help fight off a threat to her pack, to her mate, and to her family.

Edie posed before the full-length mirror in her tiny bedroom. She stuck her butt out a little more, arching her lower back and trying to emulate the stick-thin model on the page of the magazine tacked onto the mirror’s frame. “How do you even have a butt?” Edie asked the picture.

There was no way she’d ever be that skinny. Of course, she’d never have a vagina or full breasts, either.

Edie frowned, then scowled. “What idiot decided that’s what women should look like anyway? Why am I even trying to look like you?” She tore the paper down. “You’ve got nothing on Marilyn, girl.”

Edie preferred the curves and softness on a woman to those stick-straight lines she’d been trying to copy. Even with the parts she had, Edie was curvier than that model.

Well, okay, maybe they were equal on the lack of breasts part.

Edie pulled her dress out and glared at her flat chest. Breasts weren’t ever going to develop there, and implants were out of the question. As a shifter, her body wouldn’t tolerate anything like that.

She was okay with it, mostly, though. She had to be. A good bra fixed the problem, and anyway, while she’d felt a bit off in her body as a child, maturity had brought around a certain level of comfort with it.

The fact was there would be no altering her body from male to female, not since she was a shifter.

Edie had accepted that and now actually liked having the equipment she had. It was a pain to tuck and such, but yeah, she was content. Mostly. Okay, no, but she was learning to be happy with what she had.

With her body, at least. Everything else was…confusing and scary. Edie pushed a curl behind her ear. She flicked the clip-on earring dangling from that lobe. It was too bad pierced ears weren’t possible either.

Although, maybe, if she talked to the shaman—

Edie shook her head. “No way.”

There wasn’t any chance she’d run into Rolly if she sought out Remus, and yet she couldn’t get Rolly out of her thoughts. It seemed like any time she left her house, or even her bedroom lately, she carried the expectation of seeing the man again. It was giving her the creeps or something like that. No, not the creeps. Rolly’s not a bad person. He’s just… I don’t know. He’s always unsettled me. Edie couldn’t figure it out.

Maybe Rolly had returned, and she knew it subconsciously? Though why would that be? The past year, she’d thought a lot about Rolly, though he’d always fascinated her, and scared her, too.

Rolly hadn’t done anything to harm her. He’d only ever spoken a few words to her. Edie had always been too shy and nervous to give him a chance to do more. There was no reason for him to, anyway. Rolly had proven himself to be a very powerful shaman in his own right five years ago, almost on par with his father, Remus. For all Edie knew, Rolly could have surpassed him in shamanistic abilities.

Why did she keep thinking of him? It was like she could feel him, not right there in her face, but in the background, somewhere, watching. Waiting. For what, she didn’t know. It made Edie’s belly go tight and hot.

Although, she mused as she looked at herself again, Rolly had yet to see her like this. All he’d seen was Erdwin, Edie’s blah half—as far as Edie knew. She couldn’t think of a time when Rolly would have had the opportunity to see her as her real self.

As Erdwin, Edie did feel even more out of place. Scared, timid, just out and out wrong in her skin. “Plain as that nasty vanilla yogurt,” she murmured to her reflection. It was amazing how much confidence a subtle application of makeup and a change of clothes gave her.

“Not enough to go talk to Remus.” Edie huffed and pouted. Oh, she looked cute like that! Ducklips! Definitely going to have to try that on a cute boy in town as soon as I can work up the nerve.

There was that strange tug in her gut again, warming her up.

“No, damn it.” Edie dabbed at the beads of sweat on her brow.

“You okay in there?” Solomon called out at the same time that he tapped on the door. “I thought you were coming down for supper.”

“Fine,” Edie replied, giving herself another once-over. “Just got distracted.”

Solomon snorted loud enough to be heard through the wooden door.

Edie grinned and hurried over to it. She was lucky to have the family she did, even if they were a huge clan of loud people. They were loving and accepting, and that was a lot more than many people in her situation had.

“Come on,” Solomon said as he held out his elbow. “It’s your birthday, and you’ve kept everyone waiting.”

“It’s embarrassing.” Edie slipped her arm through her brother’s. “I told you I didn’t want a party.”

“It’s not a party,” Solomon informed her. “If it was, we’d have invited people, but you aren’t comfortable with that, so… It’s only your family, celebrating the fact that they love you like crazy, and that you just started the long, slippery slope toward being an old maid.”

Edie turned her nose up at her brother and huffed. “I’m only twenty-three! And that’s just four years younger than you!”

“Dork.” Edie couldn’t contain a snicker then. Solomon was a goofball. And she was glad there weren’t any guests. Other people always made her uncomfortable. She was afraid to be herself around them. For that reason alone, Edie preferred to hide when there were any visitors.

“So I get the singing and cake, and presents?” she asked for clarification.

“Oh yeah,” Solomon agreed. “Azil is hardcore about birthdays being a big deal. You know that.”

Edie grinned. She did indeed know that Solomon’s mate insisted on making every birthday into a full-blown party. Edie put that down to Azil having lived most of his life in a very oppressive society—and to him just being a sweetheart. “Well then, that makes up for the whole birthday acknowledgment, I guess.”

Solomon cocked his head. “You knew you were getting a party. We weren’t going to ignore this day.”

Edie nodded. “Of course. Azil wouldn’t let me get by without having a party, and that’s awesome—Azil’s awesome. I just get nervous around other people. It’s so hard to even think about being my true self around them. It helps that you said no guests. As long as it’s just family, I’m okay.”

“Azil is awesome, I agree. As for the guests… I know, sweetie.” Solomon brushed her cheek with a featherlight kiss. “But you should be proud of yourself and let everyone else see how you shine. Be yourself.”

Edie bit back a sarcastic reply. Solomon was only trying to help. He didn’t understand the depth of her fear and discomfort in social situations. Probably because it wasn’t consistent. Sometimes she could go out in public with her family, but other times, she had to stay home and just hide.

So much emotion running through this book that it took my breath away. I literally cried reading how Edie, a shifter, struggled with herself and bawled like a baby at the packs reaction to her comin...

This book touches a deep emotional thread that was was very good, it was difficult to put down. Love this read. Very well written and characters are developed wonderfully. Transgender aka two spiri...

Share what you thought about Heart and earn reward points.