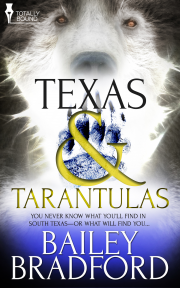 You never know what you’ll find in south Texas—or what will find you.

Trent Jacek doesn’t want too much—to live on the ranch his brother owns, a few puppies to keep him company in his trailer, maybe a good man if he can find one. First he has to catch a break long enough to try. Things just aren’t slowing down on the Jacek ranch. They’ve got a barn to rebuild, and their plan to get a pack of shifter wolves off their back doesn’t seem to be working.

Then there’s the matter of the bones the police are looking for on the ranch. After a greyed, old femur was left on the porch, Trent and his brother Joe are forced to confront some things they’d never expected to. Is that solitary bone from their mother, who went missing over twenty years ago? If so, how did she end up there? If not, who is dumping people on the ranch?

Trent’s been having the strangest dreams since he’s seen that femur but can’t imagine they’re more than just dreams. He doesn’t have a lot of time to worry about them between shifter attacks, a nosy biologist and neighbours coming by to snoop.

What Trent doesn’t know is someone has put an assassin on his tail, but it’s the assassin who will come to question everything he’s been told once he meets the vibrant, sexy man he’s been sent to kill.

Publisher's Note: This book is the sequel to Dark Nights and Headlights by Bailey Bradford.

Trent Jacek groaned as he opened his eyes. “Damn,” he muttered. He was sore as hell after spending the prior day fighting werewolves, of all things. If he hadn’t known of their existence for a few weeks now, he’d have thought he dreamed it all. And if he didn’t ache all over.

“This is what I get for fighting the good fight?” he asked no one, seeing as how he was alone. If anyone found out how often he talked to himself, he’d likely be carted off to a psychiatrist. There was nothing wrong with talking to yourself, he figured. It beat the silence and made him feel less alone…but more pathetic.

He got out of bed, griping and grumbling. A hot shower, some hotter coffee, and a few ibuprofen. That’s what he needed then he might feel more like a human being than a punching bag.

He hadn’t really taken any hits yesterday, but he was still sore. The running, ducking, and being tense as hell because he thought he or someone he cared about was going to get their throat ripped out—those things were why he ached.

“It’s a miracle you haven’t fallen off, buddy,” he said as he began to stroke his dick. He had a flash of an image that was good until he realized he was picturing Diego’s bare ass. Since Diego was his brother’s boyfriend and a wolf shifter to boot, he was way, way off limits. “That’s gross, too.” Not Diego. He was a sexy little thing. Trent liked to irritate his brother Joe by flirting with Diego, but he didn’t want to do Diego. He supposed he’d just imagined him because he’d seen Diego naked a few times lately while the guy shifted forms.

“Yeah,” he murmured, thinking of how good it’d feel to push that big man down and slide his cock into a tight, tight hole. Mouth or ass, either would be fantastic. Trent jacked himself faster, eyes closing, breath coming in pants. To shove in to the hilt, have his balls slap against another man’s—that’d be heaven.

He moaned and held his cock tighter. “Come on. Come on,” he urged, picturing it, him ramming in over and over, the man beneath him writhing, begging. Trent pinched his own nipple, and it added a spark that fed the fire of his need.

Another thrust, a twist of his wrist, and his arousal spiked into a giant burst of pleasure. Whether he cursed or shouted, he couldn’t have said. He was shaking and weak, ready to go back to bed when his climax ended.

Bed wasn’t a choice. Their barn had been burned down yesterday, thanks to the fucking werewolves that had come to try and take Diego back to his former pack. There was a lot of work needing to be done over the next several weeks. Building a new barn was one of those things.

He rinsed again and told himself to quit lollygagging around. Ten minutes later, he was dressed and out of the door, carrying his coffee in one hand and a shotgun in the other. Just because the werewolves they’d left alive had said they wouldn’t come back, didn’t mean they were telling the truth.

Trent drove over to his brother’s place—his brother and Diego’s place, he corrected. The family home Trent had grown up in now belonged to Joe and Diego. That might be a new relationship, but Trent had known from the first day he’d seen Diego jumping out of Joe’s bedroom window—although not right at that instant—that those two would end up all happy forever. He’d be ribbing Joe about that every chance he got. Probably Diego, too, because the guy blushed so easily.

Yeah, he could be an asshole sometimes. Trent knew himself well.

The sun was just starting to rise when he let himself into the house. Joe and Diego weren’t in the kitchen yet. They would be, soon. The coffee had brewed thanks to the automatic timer on the pot. The smell of it was possibly Trent’s favorite aroma. Next to a sexy man. A little sweat, some of that musky—

“Nah, Joe, it’s a murderer come sneaking in just to holler out a warning to you.” Trent chuckled as his brother hollered back for him to fuck off.

“We got a barn to build,” Trent reminded him. “No time for fucking if you haven’t already got some.” He opened the fridge and spied the makings for a good breakfast. “You two aren’t in here by the time the bacon’s fried, I’m eating it all. And drinking the coffee.”

“Jackass,” Joe said as he walked into the kitchen.

Trent turned with his hands full of foods to prepare and burst out laughing. “Jesus, bub. Your hair is standing up every which way. Must have been a fun night.”

That shut Trent up for all of a minute. He got two skillets on the stove’s burners then poured some oil into the one he’d use for eggs. “Well, well. Bragging is a sin, isn’t it? So is lying.”

Trent glanced over at Diego, who’d snuck right in on those silent feet. Trent would swear they had magic noise muffling abilities. Diego could sneak like no one else.

“Good morning, sunshine,” Trent sang, winking at Diego. “You look like you were rode hard and…rode hard some more.”

Diego blushed and ran his hands over his hair, which was even more disheveled than Joe’s. There was also a smattering of hickies down Diego’s neck and on his chest.

Trent waggled his eyebrows at Joe. “You’ve been practicing your sucking skills. I coulda told you, you suck. Now poor Diego’s all marked up.”

Diego looked like he was torn between being angry and being confused.

“Can’t help it. Got to entertain myself somehow,” he said. He cracked a dozen eggs into the skillet after getting the bacon on to fry.

“Thanks,” Trent told him while stirring the eggs. “There are some biscuits in the freezer, and a container of gravy I stored from last week. Can you hand ’em to me, Joe?”

Trent turned to eye the plastic dish Joe held up. “Nah. Should be enough. That’s why I made such a big batch last time.”

The three of them chatted idly—well, Diego was quiet more often than not. Once Trent had breakfast on the table, the conversation ceased until they’d cleaned their plates.

“Good breakfast.” Joe stood and took the dishes to the sink. “I’ll—”

“Go get dressed and cleaned up because you’ve got dog breath—” Trent darted an apologetic glance Diego’s way. “No offense.”

Diego stuck his tongue out at Trent. “I’m not a dog. I’m a wolf and only when I shift. Totally different species.”

Along the way, Trent and Mahon fall in love amid fighting against bear shifters, wolves and an annoying biologist. I really enjoyed reading this wonderfully written story. It had drama, action, love,...

If you prefer your shifters to be of the “vicious” persuasion rather than the “fluffy” kind, if you enjoy seeing two men going from being enemies to becoming lovers once they listen to each other...

Share what you thought about Texas and Tarantulas and earn reward points.

Evenings are reserved for pounding away at the keyboard, as are early morning hours. Sleep? Doesn't happen much. Writing istoo much fun, and there are too many characters bouncing about, tapping on Bailey's brain demanding to be let out.

Three of my favorite celebrities:

I don't watch TV much at all, so I'm picking musicians.

•  hooked me with his rendition of's Hallelujah. He has so many songs that I love, and I can't wait to see him in concert again in November. He's so much fun to watch live, and his voice is beautiful. My mother, bestie , and youngest daughter will be going with me to see Rufus this time, and we're going to be those loud fangirls that every concert needs to have.Read more