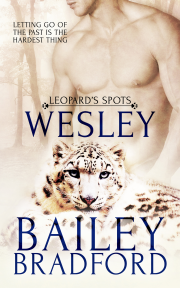 Book 8 in the Leopard's Spots series

Letting go of the past is the hardest thing these two men have to learn to do.

Wes Ward made a mistake—a few of them, to be exact. He felt abandoned, forgotten by his older brother, Sully, once Sully found his mate. Wes let anger and loneliness influence him, and he tried some things he shouldn't have. Getting busted by his mom was probably the one thing that saved him. Getting sent to stay with the brother he thinks forgot about him might be an unmitigated disaster.

Or it might be Wes' salvation. In San Antonio, he is forced to confront the things he has done, and his childish reasoning for it. It isn't easy, but after a spectacular blow-out with Sully and his mate Bobby, Wes finally begins to try to get past his issues. When he meets a skittish, sexy man at the homeless youth shelter where they both volunteer, Wes thinks he's found more than he ever thought he'd have.

Armando has been hurt too many times to count, but the last time almost cost him his life. He's carried unwarranted anger around for over two years, refusing to make peace with Sully or Bobby, so to find himself attracted to Sully's little brother Wes is a shock.

Wes Ward glared at his older brother Sully. “This is stupid. I screwed up one time—”

“You got busted by Mom one time. That doesn’t mean it was the only time you did it, just that it was the only time you got caught,” Sully said calmly. Wes wanted to punch him or poke him, do something to break through that utter freaking calm that seemed impenetrable. Sully talked on, either unaware, or, more likely, uncaring that Wes was steaming mad. “You can pout and throw a fit, but Mom and Dad sent you down here to me and Bobby because they aren’t stupid either, Wes. They know that you’ve probably been using more than just the one time.” Sully arched a brow in an imperious look that made Wes growl.

“Calm down, kitty boy. Otherwise I might have to put you over my knee.” Wes jerked his head around, surprised to find Sully’s mate, Bobby, not more than a yard behind him. He hadn’t even heard the wolf shifter approach, which was screwed up. Wes, like his brother, was a snow leopard shifter. They had enhanced senses just like the damned wolf shifters did. Wes had been too busy listening to his own blood boil to hear Bobby coming up behind him.

“I’m not teasin’ ya, Wes,” Bobby uttered in a soft, low voice that was all the more intimidating for its laid-back tone. “I won’t have you talkin’ to my mate like that.”

“He’s my brother,” Wes said petulantly. He cringed inwardly at how childish he sounded, but his pride wouldn’t let him back down. “You need to stay out of this.”

Wes hadn’t ever seen Bobby anything other than what could only be termed mellow, or all googly-eyed and pawing at Sully, which was to be expected as they were mates. But now he was seeing a darker, scarier side to the man who would someday lead the San Antonio wolf pack.

Bobby’s entire countenance hardened. There was no other way for Wes to describe it or process it. The relaxed slump disappeared from Bobby’s stance and his eyes, normally glinting with mischief, went sharp with the promise of that very spanking he’d just mentioned.

And muscles? Wes hadn’t really paid much attention to Bobby other than to admit to himself that, yeah, the guy was hot. How he’d missed the bulge of defined muscles was beyond him.

Then he felt it, the wave of power rolling off Bobby. It was like an electrical current in the air, surrounding Wes. Every hair on his body stood up, even those on his nape. If he hadn’t been wearing a ball cap, he’d have bet the hair under it would have been standing on end. Inside, his snow leopard yowled unhappily. Wes wasn’t a dominant person, and neither was his leopard. They weren’t made to stand up against the power of an alpha like Bobby.

Yet Wes tried, forcing his gaze to remain locked with Bobby’s. Everything else around them faded, the comfortable furnishings, the knick-knacks that made the place a home Wes was envious over. He’d never admit it, but he wanted a home with a mate who loved him. Being jealous just made him feel petty, and Wes didn’t like himself for it. If he weren’t feeling so…challenged and ganged up on, he’d probably have admitted that his coping skills sucked. However, he’d effectively dug himself into a corner surrounded by his own belligerence. He was, in his own mind, stuck.

“Bobby, maybe you should let us work this out.”

Wes didn’t look away from Bobby when Sully spoke. He felt like prey, and glancing away would mean he’d be taken down like a rabbit under the weight of a leopard.

Bobby snarled, his top lip curling up on one side, baring a hint of teeth. “I don’t take shit in my own house, Sully. Not from anyone, and especially not from your punk-ass little brother.”

“He’s not always a punk-ass,” Sully muttered. “We used to be friends. What happened to us, Wes?”

Bobby growled and Wes’ kneecaps tried to turn to gelatin. His legs quivered but he refused to glance behind him. He knew what he’d said wasn’t fair, and wasn’t accurate—exactly—but it was how he felt, and Sully had asked, after all.

Sully’s confusion morphed into hurt, then something too damned close to pity for Wes’ sake. He averted his gaze to glare at a spot over Sully’s shoulder. The kitchen walls were painted a soft peach colour. Wes wondered who had picked it out.

“I never forgot about you, Wes. Jesus.”

From his peripheral vision, Wes could see Sully raking his fingers through his hair. That god-awful feeling of power faded from the air, and Wes released a little of the tension that had been knotted in his chest.

“I had to go to college,” Sully began. Wes nodded just enough to show he got that, but he still didn’t look at Sully. “Shit. Shit, Wes, I’m sorry. Okay? I… I know I didn’t stay in touch like I could have.”

Wes hitched a shoulder in a shrug. Sully sighed and before Wes could stop him, he pulled Wes into a tight hug that Wes didn’t return.

“I’m sorry. I know you called and texted, but it seemed like it was always when I was in class or doing something where I couldn’t reply or answer, and by the time I could—” Sully held him tighter, and Wes stiffened, his anger growing with Sully’s admission. “It wasn’t that I forgot about you, Wes. I’m just an ass. I got so involved in my own life…”

“Let go of me,” Wes gritted out, barely having the breath to do so. Sully went rigid but released him, except for a hand to his wrist. “This is stupid anyway. I’m not a kid. I don’t need you or anyone else to give a damn about me.” But his heart ached like a mother when he said so.

Sully frowned and held his wrist so tight it started to go numb. “You don’t mean that. You’re angry, and I get that. I wish you’d have talked to me sooner—”

Wes almost blew up with the force of his anger. He jerked his arm free. “How the fuck was I supposed to do that? Huh? How many times did I email or call or text, like you said? You know you answered on average one in five times. One in five, Sul. Think about that.”

Wes had, and he’d become angrier and angrier, even as his loneliness had increased. He’d never been exactly outgoing, and had preferred to stay in his room playing games when he didn’t have to work at the gas station. But he’d missed Sully, missed his teasing and practical jokes and his companionship when Sully would make him come out and be sociable.

“Fuck this.” Wes was done. This was all too much to handle. He turned to head for the door. His family couldn’t force him to stay here. If they thought shipping him to Sully—sending him to San Antonio from Colorado—against his will meant he was going to just be a good boy and keep his head down like he was ashamed, they were wrong.

Even though he was ashamed. And Sully was right. The night he was busted with drugs wasn’t the first night he’d bought them. The ironic thing was, if his parents or even his little sister Sheila had been paying any attention to him at all, they’d have noticed the change in his scent. Wes had. He’d had an acrid, almost too bitter aroma to him by the time he’d been caught by their mom. A month later and he almost smelled like himself again.

Eau de Slacker. Wes snorted at his silly joke. He veered around the couch table and was three feet from the door when he felt it again. That ominous wave of power prickled over his skin, stronger than before. Wes’ leopard mewled in fear and he shook all the way to his toes as his knees buckled. Goddamn Bobby.

“You ain’t runnin’ away from here, or from what you’ve done.”

I really enjoyed reading this book. Such emotions, it was a great addition to the Leopard's Spots series.

WESLEY is another in that highly entertaining set of stories...each one brings more characters and events out for readers to enjoy.

Share what you thought about Wesley and earn reward points.