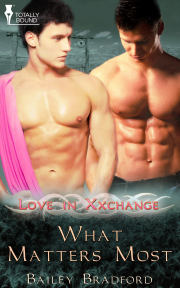 Book 4 in the Love in Xxchange series

Sometimes it takes losing everything to find out what matters most.

Josh has a fondness for hot pink, penguins…and one wicked man he knows he shouldn't trust. Nick is a confused, angry man, one who has been denied the opportunity to know his half-siblings, who was ignored and treated less than second best—until the fair-haired children fell out of favor with a resounding thud. Now Nick has something he isn't sure he wants—a ranch left to him by a father who never cared for him, and a fascination with a certain hot-pink, penguin printed, scrub wearing nurse who makes his blood boil in a way no woman ever had.

But Josh left him hurting on the floor the last time he dared touch the man. Nick had never thought the attractive dark-haired man with the jewel-bright eyes would be anything other than a tool to spy on his half-siblings, but somehow, Josh has gotten under Nick's skin, and Nick isn't sure he ever wants it any other way.

But the choice isn't just his, and it's more than just their futures that are at risk… And Nick doesn't know if he can get past Josh turning away from him once again, or if he can be strong enough to reach for what matters most…

I just adore Josh in this series and I think we all need someone like him in our life. Go Josh and go penguins!

Share what you thought about What Matters Most and earn reward points.