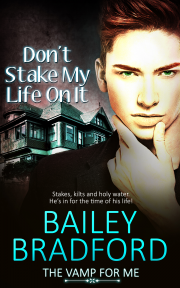 Don't Stake My Life on It

Book 2 in the The Vamp for Me series

Stakes, kilts and holy water—Andrew Meyer is in for the time of his life!

Radney’s tired of being the coven oddball. He had his reasons for being the way he was, and he let those reasons rule his life for centuries. Another mistake—almost harming a human he’d been sent to keep an eye on—has sent Radney on a mission of self-improvement. He’s going to conquer his issues and be the best damned vamp ever!

Andrew Meyers has the term paper from hell to write. It needs to be original and intriguing. What could be more so than people with a vampire fetish?

But when that fetish turns out to be one he has, for a very sexy, kilt-wearing, neurotic vampire, the tables are turned. Andrew isn’t prepared to find out that vampires are real, but he learns it anyway. With help from his twin brother, Erin, he just might be able to find a happy ending—or an ecstatic beginning—for him and his hot as hell red-headed vamp. If he’s careful, and patient, he might even find the vamp for him.

“I am not crazy!” Radney stomped his right foot for emphasis. “And if anyone should be in trouble, it should be Tony since he’s the one who sent me after that tubby human!” Stomp!

“Radney Darrow, if you stomp that foot one more time, I swear I’ll throw you over my knee and paddle your ass.” Unlike Radney, Claude spoke calmly, as if he were talking about the weather.

It was downright spooky. Radney shut his mouth but glared and folded his arms over his chest.

As coven leader, Claude could do whatever he wanted to Radney. A spanking sounded particularly humiliating.

“Vampires shouldn’t be punished like small human children would be,” he grumbled, irritation getting the better of him.

“Well,” Claude drawled, “if you insist on acting like a child, I won’t hesitate to treat you like one.”

Claude rolled his eyes. “Tony has been chastised for sending you after Augustin. What were you thinking, to terrify the human like that?”

Thrilled with a chance to explain, Radney enthusiastically answered, “I was thinking that I’d scare him into never, ever speaking of vampires again. And maybe that he’d taste sumptuous. He’s really plump, after all, like a nice, stuffed goose. I mean, yeah, I don’t like to bite people, but I was really, really hungry.” He smacked his lips together, his mouth watering. “I didn’t get to feed before Tony sent me, either.”

“You know where your blood supply is kept,” Claude said.

“But it was stale,” Radney complained. At least he refrained from whining. “Paulo brought me the stuff the blood donation place threw out. It was gross.”

Claude stood. “Was it? I’ll check it and if you’re not lying, I’ll have a word with Paulo. If you’d just drink regularly, you wouldn’t get in these predicaments.”

If by predicaments, Claude meant Radney wouldn’t starve until he nearly lost his shit from blood lust, he was probably right.

“I don’t like biting humans,” Radney repeated. The only way he managed it was if he was out of his mind with hunger. “They scream.”

“Not if you do it right.” Claude tugged at his shirt cuffs. Always immaculately dressed, Claude was never seen in anything other than one of his expensive, tailored suits.

“Maybe you should spank whoever decided it was a good idea to set up a vampire dating website to attract humans,” Radney suggested. “I mean, I get that you guys like to hook up all the time, but—”

“You guys?” Claude said in that calm, creepy voice again.

“And tell me, Radney, do you see me bringing in a parade of hot young men to fuck on a nightly basis?” Claude narrowed his eyes. “No, you do not. I’ve had enough of your bigotry.”

“What?” Radney shook his head. “I’m not bigoted! I read that book in the library, the one Chelsea gave me on homosexuality in the twentieth century. If I was a bigot, why would I read that?” Plus, there’d been things in his past, albeit he’d had little control over them. But still.

“God,” Claude groaned. “Chelsea gave you a book on homosexuality? Why? And even more importantly, why did you take it from her and read it?”

Radney was beginning to suspect he’d been played the fool by Chelsea. “Uh. She told me if I didn’t read it, she’d stake me in my coffin while I slept?”

“Did she really?” Claude asked.

It sounded better than the truth, but Radney couldn’t hold out on a lie to Claude. “Er, no. But she did say I’d wake up bald if I didn’t educate myself, and she handed me that book.” She was also the one who’d insisted that it was okay for him to tell a certain joke that, in retrospect, he could clearly see was inappropriate. “Sometimes I’m gullible.”

“I am aware,” Claude acknowledged. “Describe the book cover to me.”

“It was the American flag with this ugly old guy on it,” Radney said. “Like boner-killingly ugly.”

“That book was written by a conservative talk show host who hates everyone and everything that isn’t an old, white, wealthy male,” Claude explained.

“Oh.” Radney considered that information for a moment. “Well, if it helps, I didn’t make it past the third chapter, but don’t tell Chelsea.”

“I’ll be telling Chelsea quite a few things,” Claude assured him. “It might be in your best interest to take a little vacation. I’ll have Paulo supply you with fresh blood shortly.”

“No, though the next time you do something as asinine as terrorize a human, I’ll bury you for a decade.” Claude crossed over to the door.

“What about Tony?” Radney dared to ask. Tony was Claude’s favorite vampire, the one he was training to take over the coven. Radney was more than a little jealous about that, though he shouldn’t have been. Claude wasn’t his sire, after all, just his leader.

“Tony has been dealt with. He gets to take care of the human, Augustin.” Claude opened the door and smiled slightly. “And by the way? I wouldn’t advise mocking Augustin over his weight, or quoting any of the ridiculous shit you read in that book. Augustin strikes me as the kind of man who will exact revenge for each insult.”

“Revenge?” Radney giggled. “What’s he going to do? He’s just a human.”

Claude’s disdainful expression almost crushed Radney. “Don’t be a bigger fool than you already were tonight, Radney. Being human doesn’t mean being weak.”

And he wasn’t a bigot! Radney had just been joking that one time, repeating something Chelsea had told him. He’d laughed with her, and she’d encouraged him to share the joke. He was really coming to hate her.

Gods, he wouldn’t want to live in the coven if he was bigoted! Was the joke really that bad? Or is the problem that everyone else lacked a sense of humor and education about comedy.

The relationship that develops between Rad and Andrew is sweet because they don't jump right in – at least not emotionally – preferring to get to know one another better before making an eterna...

There is so much in this book - hunters, mind wipes, and Radney’s fear of biting humans because of the life he led when he was first turned. Erin is amazing as a secondary character and if you have...

Share what you thought about Don't Stake My Life on It and earn reward points.

Bailey Bradford - Because Two Men are Better than One feature

Mmmm, Vampires! Vampires—they’ve come up in the world, from scary, soul-sucking demons out to murder innocents, to sexy, biting, mysterious and often somewhat tragic heroes.