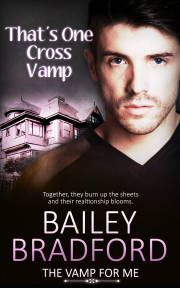 Book 6 in the The Vamp for Me series

Erin Meyers knows all about the existence of vampires. He’s the guy who helped his twin brother Andrew find true love with the kilt-wearing Radney.

A doctor’s visit leaves him fearing for his life. When he encounters a friendly vamp he knows out at the club, Erin breaks his no-vamps rule and takes Jude home with him. Together, they burn up the sheets, and Erin finds himself willing to spend more than one night with Jude. Soon, a relationship blooms, but the bad news Erin gets might put an end to any dreams he had for the future.

Sunlight—Erin Meyers loved it. He rolled onto his stomach and tugged his ball-snugglers up so his tan line wouldn’t show when he went to the beach wearing his bathing suit that made a Speedo look like a Puritan’s modest dress. He had a nice ass, and when he was out prowling for men on the beach, he liked to go as close to naked as possible.

Erin sighed and drifted a little, letting himself completely and utterly relax. It’d been a bad week at the office. As a psychiatrist, he saw all sorts of people, but for the most part he managed their medications after meeting with the person one time. After that, he had them start therapy with a psychologist or licensed therapist. Sure, he saw those patients monthly for check-ins, but… Well, he made a shit-ton of money, but lately that just didn’t seem to matter.

Kind of like getting laid wasn’t the priority it’d once been.

God, he was closing in on middle age, depending on the average male life span in America. He wasn’t going to look it up—he didn’t need that kind of depressing info. He was going to be forty soon, though, and like the typical, clichéd guy in the throes of a mid-life crisis, Erin was finding himself dissatisfied with everything.

And having to work so much harder not to have parts droop or go to fat.

And he had gray hair at his temples, which he dyed religiously.

And he was getting ear hair. What the hell is up with that? Like anyone needs the additional intrusion against being able to hear? Is that why so many elderly people are almost deaf? Overwhelming ear hair?

Then there were the latest results of his physical and bloodwork. High cholesterol, plus some other questionable results that needed further research.

“No.” Erin was going to relax, enjoy the sun, and not let anything ruin his day. He took half a Xanax, needing to bank the anxiety threatening to build rapidly. He picked up the Beats headphones he’d set by his lounge chair, connected them to his iPod, and put on his favorite playlist as loud as he could get it. Then he carefully blanked his mind, and after a while, dozed off under the hot Nevada sun.

It’s a damn good thing I’m burn-proof. Erin sat up, awakened, he guessed, by his playlist ending, or his Beats dying…or the iPod dying. When had he last charged either of those, anyway? Erin shrugged and stretched. He was drenched in sweat, warm through and through, and he felt great. That nap had been just what he needed before a night out.

His twin brother Andrew had long ago settled down with one man… Okay, one vampire. Erin had stopped being freaked out about the existence of vampires way back in his early twenties. Even then, when Andrew had stumbled upon their existence, Erin had been less surprised than he should have been, probably. Well, he’d always been the cynic out of the two of them, so it just hadn’t blown his mind to discover human beings weren’t the be-all and end-all of intelligent life forms.

He’d also been the shallower of the two. Andrew was the introvert, the loyal lover and mate. Erin was the bitchy playboy, although he kept the bitchy to an as-needed basis more often now.

Erin shook off his wandering thoughts. Andrew had always been a homebody and Erin had not, that was the gist of the whole thing, anyway. Erin was also aging, and Andrew was not—a benefit of being a vampire’s mate.

Bailey Bradford has created an impressive and emotional addition to this series. I especially enjoyed Erin’s willpower to conquer his health issues as well as Jude’s determination to provide all o...

I think this may be my favorite book in the series...I appreciate that Bradford was able to strike that balance between seriousness and humor, keeping the book from being too lighthearted or too heart...

Share what you thought about That's One Cross Vamp and earn reward points.