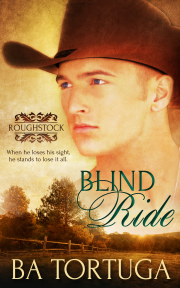 Book 1 in the Roughstock series

Jason Scott has everything a bull rider wants—success, money and traveling partner Andy Baxter. When he loses his sight in an accident, he stands to lose it all.

Jason Scott is at the top of the bull riding game, on his way to a winning season. Along with his traveling partner, Andy Baxter, he’s riding hard on the circuit, working around the country with all of the other bull riders and bullfighters, living the good life. The only thing he wishes he had is Bax, but he’s afraid to take the step that would make them more than friends, worried that it will ruin everything.

When a terrible accident leaves Jason unable to see, his whole life goes south. Jason decides to chuck it all, determined to go home and hide at his momma’s ranch. Bax has other ideas. He wants to make sure his best friend doesn’t give up, and he hatches a plan that stuns Jason and makes their friends and family think he’s crazy.

With the help of the other bull riders and a very persistent bull fighter named Coke, Bax convinces Jason to give life one more try. With Jason cautiously learning to hope, and his relationship with Bax going to the next level, life gets pretty complicated. Everyone gets in on the project, from Jason’s strong-willed mother to an entire ranch full of children, all of them working to help Jason do what he loves.

Jason stood there with the big fake check for the event win, watching the crowd go one of two ways—up and out of the stands, or down to wait for the guys to make the autograph circuit. He fucking hated this part.

That little broad from the XSports channel was waiting with her bright orange hair and her too tight jeans. He knew how it’d go, too. Blah blah blah Jason Scott blah blah blah race for the finals blah blah blah new kids chasing his ass.

He managed to get through all the questions without being an asshole, but not before a huge stack of fans were hanging over the fence, waving programs and hats, hollering his name. He ducked under into the pens and headed toward the back. He just wasn’t good at that whole meet-and-greet thing.

“You’re gonna get a reputation as an asshole, man.” His best buddy, Andy Baxter, fell in beside him, boots clacking against the concrete walkway back to the locker room.

“Yeah, yeah. Better let them think I might be than know I am. ‘sides, I don’t see your happy ass out there, Bax.”

And shit, nine times out of ten Bax was out there glad-handing.

That slow Texas drawl always made him smile, because it made everyone think Bax was laid-back, maybe not so bright.

“Yeah?” He winced, shook his head. “You came down on it fucking hard. I swear that bull has it out for you.”

It was hell getting old.

“I did.” Bax shrugged, sticking his hands in the pockets of his old school Wranglers. “I ain’t the man of steel I used to be.”

“Bullshit.” There wasn’t any bastard on Earth tough as Bax. He knew it to the bone. “You want to go get a steak?”

“Hell, yes. Someplace not at the hotel.” They were staying at the sanctioned hotel because the sponsors had asked Jason to, but eating there was like sitting in a fishbowl.

“I got the truck here. We can go anywhere.” He nodded to Little Jack and Harvey who were still waiting outside sports medicine. DJ had taken one hell of a spill, just got caught up and dragged. “Y’all heard something?”

“I hear you, old man.” He winked at Jack, headed off, following that tight little ass to get their gear.

“Not that much older than you, Mini.” Bax took every opportunity to give him shit about how much shorter he was.

“Three years is a fucking eternity.” He ducked the lazy swing, just hooting with it. “You still scattered from the round, man? You missed.”

“You were on the move. Stand up and let me hit you, man.” That laugh was sure enough the best way to make him forget all the shit his sponsors wished he would do.

“Fuck you.” He started stripping off his shirt, hunting something clean and less dusty.

“Here.” One of his hanging shirts landed on his shoulder. “That one looks good on.”

“Thanks.” He redid the smell-good, the deodorant. Then he changed his boots. “Man, I need a beer.”

“We can have that with supper. Or, hey, we could go play some pool.” Oh, yeah, because Bax wanted to shark that five thousand he’d won in the second go-round.

“We could do both. Hell, after a steak, I might feel ten years younger.” He got himself put together, tucked in his shirt and got his belt buckled. Okay. Wallet. Phone. Bag. Time to get out of Dodge. “Besides, all the buckle bunnies’ll be gone home by late.”

“True enough.” They went out the back way, Bax’s white shirt setting off his deep tan, that black hat playing hide and seek with Bax’s dark brown eyes and smile lines.

Jason tossed his gear into the back, thumping his cock but good as it did its dead-level best to wake up and say hello and howdy to Bax.

Good night. You’d think he was a Brazilian after a good ride. Down boy.

Bax threw his duffel back, too, sliding into the driver’s side. “So, where to? I figure that one little place where you circle your order will be closed.”

“There’s that one place by the highway—about twenty minutes out. It’s nothing but old ranchers taking their women out. Nice T-bones.” And he always got tickled by those tables with the ads printed on them. Reminded him of going to auction with Pa-paw.

“That works.” The big dualie slid into traffic like an elephant into a herd of zebras, Bax muscling them right in.

They scooted down 35, radio blaring. He found a pack of smokes in the console and lit one for Bax, then got himself one. Three days of rest, then Tulsa.

“You think we ought to try and hit home ’fore Tulsa?”

It was kinda eerie sometimes, the way Bax read his mind. Then again, they’d been on the road together for nigh on six years.

“We can. Momma’d like to see us. ’Course, we could go on to the city. Goof off. Depends on how much you want Momma’s pineapple upside down cake.”

“Oh, I’d rather go see your momma.” That man did have a sweet tooth. Pineapple upside down was Bax’s very favorite.

“Shit, you know it. Just don’t ask me to walk fence.” Wheeling around a little Honda, Bax started humming with George on the radio, off tune as anything.

“Nah. You wouldn’t be worth shit in Tulsa, then.”

They both hooted, and Jason leaned back, easy in his bones.

Man, event win number three. Check in his pocket. Him and Bax heading for steak.

Life, she was good.

Blind Ride by B.A. Tortuga was a beautifully written story of friendship, love and tenacity. There were so many things I loved about Blind Ride. Ms. Tortuga delivered camara...

I loved this.  Texas just kinda seeped into my bones as I read it.  So did Tortuga’s beautiful, damaged men.  Bax and Jason’s relationship is pretty unique in fiction - unique and wond...

Share what you thought about Blind Ride and earn reward points.

Unless someone lives the Western lifestyle, they have no idea how many times someone has asked me, “What on earth do you get out of going to the rodeo?”

Why have you chosen to set this series around a professional bull riding league?

Believe it or not, I’m writing what I know in this case. One of my brothers rode bulls, I grew up in a ranch, and I’ve probably been to fifty or more professional bullriding events in the last ten years.

Other books in the Roughstock seriesView Series Page