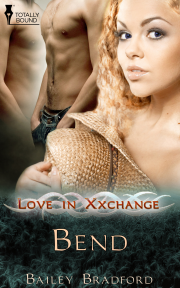 Book 3 in the Love in Xxchange series

Annabelle Calhoun has always been too strong to break, but now she's going to have to bend if she wants to keep the love that's unexpectedly come into her life.

Annabelle Calhoun had always been proud of her independence. She didn't need a man in her life for any longer than a night, and even then, it was her way or the highway. Seeing her brother Rory in a loving monogamous relationship didn't sway her, neither did the love between her bunkhouse mates, Max and Bo. She didn't want anything other than a good time from a man.

But two men—she's been there, done that, but these two men, Justin and Evan, want something more than one night. Together, they just might be enough to make Annabelle bend.

Reader Advisory: This book is part of a series but can be read as a stand alone title.

“Come on, baby,” Annabelle gasped, “you know I’ll ride you hard and dirty if that’s what it takes! Uhn!” Her ass hurt, her thighs were screaming, and she was being pounded within an inch of her life. She was pretty sure her internal organs had been battered and were even now free-floating in her body, her ovaries and kidneys high-fiving each other as they switched spots. “Christ!” A particularly hard slam had her teeth snapping together and black dots dancing in her vision, but she was still…hanging…on! Take that, you stubborn, crazy—

“Annabelle! What the fuck are you doing?” Rory yelled and diverted Annabelle’s attention at the worst possible time. The horse beneath her kicked his back legs out at as he lowered his shoulders and twisted, then jerked and reared up—and Annabelle hit the dry, hard dirt with a bone-jarring thud that surely turned those floating organs into a sloppy pulp. “Annabelle! Shit! I told you to leave Manilo to me! He’s too ornery and just too much horse for you!” Rory slid to his knees beside her, reaching for her before stopping with his hands just above  her shoulders like he was afraid to touch.

He should be, Annabelle fumed, despite the pain in her body. If he hadn’t been such a damn momma about this, I wouldn’t have been distracted. As much as she’d love to point that out to him, she wasn’t sure she could even breathe yet, much less light into him. Somehow she managed to sit up and suppress the shudders that wanted to rip through her. Getting thrown sucked. Getting thrown while your hovering brother watched sucked stubby monkey toes.

“Sis, how…where does it hurt?” Rory rolled his eyes at his question before Annabelle could. “Stupid question, I know. Manilo tossed you off like you were nothing, and you landed damned hard.”

“No kidding,” Annabelle huffed out, the words scraping her throat. Was there nowhere on her that didn’t hurt? “’Cause you screeched like a momma at me, distracted me. Thanks.” Geez, her chest hurt. She glared at Rory until the prancing horse behind him caught her eye. Manilo looked inordinately pleased with himself, and in case she didn’t get the visual clues, he nickered and tossed his head before bolting across the corral.

Rory must have decided if she was well enough to snark at him, she was okay to touch. He grabbed her shoulders and shook her lightly. “If you hadn’t got on Manilo like I told you not to, then there’d been no startling you, would there?”

Annabelle groaned and knocked his hands away. “If you would stop treating me like a helpless female, then you wouldn’t have screeched and scared the beejeezus out of me! I’d still be on Manilo!” Maybe. Manilo made a sound which she was sure was the equine version of laughter and reared up. Rory’s hand on her cheek brought her attention back to him. The concern in his midnight eyes, so like her own, almost made her not quite furious with him.

“I can’t help worrying about you. You’re the only sibling I have, the only family…” Rory’s eyes grew damp and his lower lip trembled.

Well, crap. That always kills my mad. “I know, but—” Annabelle raised her hand to cup his and hissed as pain shot through her wrist. Tendrils of heat speared down to her elbow and up to her fingertips.

Rory rocked back on his heels as he chewed on his bottom lip. “You need to get checked out. Is that the worst of it, your arm…wrist?” he corrected when Annabelle shook her head. “Anything worse that would keep me from helping you up? I can call an ambulance.” Rory glanced over his shoulder. “Chance!”

“No,” Annabelle muttered, because everything hurt, but her wrist was definitely throbbing in a worrisome way. “No ambulance. Just my wrist is all that’s hurting.” She could hear the heavy thud of boot steps, knew Chance was running over after hearing Rory’s frantic yell. In seconds he was there too, looming over both her and Rory. His lips twitched as he looked down at Annabelle.

“Just couldn’t stay off of Manilo, could you?” Chance asked, amusement tinting his voice.

Annabelle thought she did well to refrain from an answer of ‘duh’. “Obviously I couldn’t stay on him.” Then she gave Rory a withering look. “Although, maybe I wouldn’t have gotten thrown if doofus there hadn’t started screeching like a banshee at me.”

Chance huffed out a laugh. “I’m rather fond of his, hm, screeching, myself.”

“Gross,” was the only answer she had for that.

“So where’s the most damage?”

“My left wrist,” Annabelle snapped out before Rory could answer for her. The pain was steadily increasing in her wrist, and she wasn’t the type to handle pain gracefully. “And it hurts like a mother.”

“I can imagine,” Chance agreed. “Let’s get you up and to the doctor. He can fix you up in no time. Then you and your brother can have a throw-down over whose fault it was your ass got dumped.”

One of the things Annabelle loved about Chance was that he stayed out of her and Rory’s disagreements. She knew he most assuredly sympathised with Rory in private, but he’d never intervened or criticised her openly, and she could respect that. Chance should be on her brother’s side. Rory deserved someone who’d stand by him through any and everything after the crap he’d been through.

But it’d be nice, not that Annabelle would admit it out loud, if she had someone who would stand by her, too.

For an author that doesn't focus on man woman romance stories this one is well written and I liked it alot. The fact that Anabelle is suspicious at first thinking that it was one of the guys after her,...

The plot had me gripped right away. The characters are so well written and well described that I fell in love with them all. Belle is such a strong willed, self sufficient wom...

Share what you thought about Bend and earn reward points.