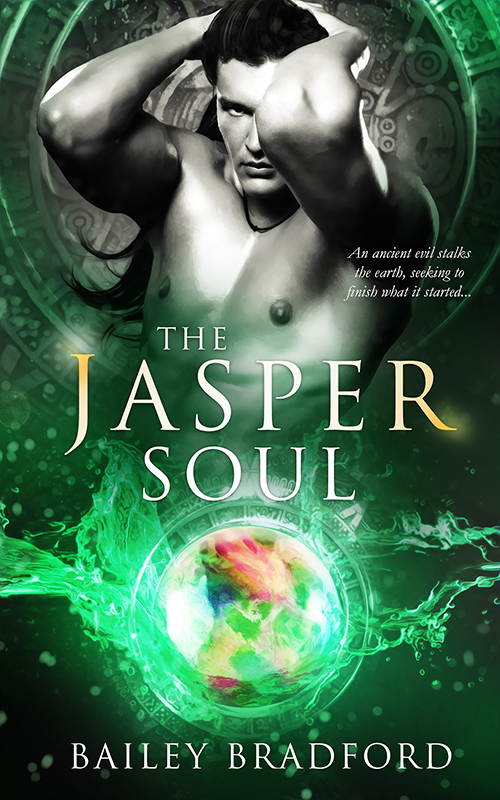 An ancient evil stalks the earth, seeking to finish what it started…

Matt Callaghan is pretty sure he’s just an average guy. His tragic past haunts him, and the only comfort he finds is something he’s not willing to explain to anyone else. The jasper stone he found as a child had been with him for over half his life, and he can’t be parted from it.

There’s more to the stone than Matt knows. Thousands of years ago, one man, the last of his people, was cast into the stone, his soul protected when his body could not be saved.

The evil that hunted him is still alive, still waiting for a chance to destroy the jasper stone.

Rocks have always fascinated me. When I was a kid, I wanted to grow up to be a geologist. Every time I found a rock that interested me, I’d pick it up and take it home, then crack that sucker open with a hammer as soon as I got the chance. Despite a few injuries—I’ve got a couple of small scars on my cheeks and one on my chin from rock chips flying off as I banged away—I never stopped doing it.

But I didn’t become a geologist, or even go to college. Life happens, as the saying goes. That’s never used as a positive statement. It always indicates a rough or bad time in someone’s life, which was true for me. I had neither the money nor the grades to get into a decent college, and it seemed like too much work, when I’d stopped dreaming of a better life.

I didn’t want to go there right then. Instead, I just wanted to sit in the early morning sunlight streaming through the breakfast nook window and study the one rock I’d never been tempted to break.

Holding the piece of jasper up to the sun made the greens and golds shine brilliantly. That stone always seemed to pulse with some kind of mystic energy. I know that’s crazy, and it’s just a piece of jasper polished from hundreds, no, thousands, of years on this planet. That I found it in the first place was stupendous luck.

I’ll never forget it. Me, Timmy and Erin had been best friends practically since birth. I was just beginning to suspect I wasn’t quite like them. All their talk of girls and what they wanted to do with a girlfriend if they ever got so lucky as to have one left me cold and, to be honest, a little queasy. It was nothing for them to throw around words like ‘queer’ and ‘faggot’ as insults. I was guilty of it, too. Maybe more so than them, because I was afraid of things I just didn’t understand, and I didn’t want to examine why I was confused about stuff like not finding girls attractive. Our church was a small one, all hell-fire and brimstone. Honestly, I never understood how anyone was ever going to make it into Heaven. It sounded like an impossible task, even with Jesus interceding for us.

Well, I’m rambling off-course. I couldn’t tell my friends what I suspected, even though we’d been best buddies all our lives. There was too much hatred when they said those words and though I tried to emulate them to defer suspicion, it only worked for so long.

That wasn’t what I wanted to remember today. I focused on the stone, the smooth, warm surface of it. Sometimes I fantasized that it was an ancient, sacred relic. Really, it was just an oval, smoothed over by the river and rocks where I’d found it. It held a glow that made it look polished, and who knew? Maybe someone had tossed the stone in the river not long before I found it. That was the most likely scenario.

Even so, I’d kept the stone a secret. When Timmy and Erin and I were out hiking in the wild of the beautiful Texas Hill Country, camping out for a few days because our folks figured we were old enough to do that then, we talked mostly about girls and sex and, of course, jerking off. I’d heard stories about boys doing that together all the time but still being straight. There was none of that for us. No one was going to whip out his dick and start stroking it around the other two. If masturbating was going to get us sent to Hell, then doing it with another guy—or two—would probably have gotten us the worst level of Hell.

It was our second day out, and the heat was getting to us. The river wasn’t too deep, the current not very strong. There were some rapids that were fun to go over in inner tubes but not so much on just our ass.

We didn’t care. We were kids, hot and excited about playing in the water. We stripped to our briefs and jumped in. We had to watch out for cottonmouths and such. There was nothing quite like shooting down rapids and having a snake zip along with us. Talk about water pollution. We caused many cases of it when someone pissed themselves in fear, and rightly so. Cottonmouths could be deadly if they got enough venom in someone.

Timmy hit the rapids and yee-hawed at first, then screeched that there was a snake and Erin and I were scrambling to our feet in a rush. Timmy’s blond hair was almost white, and so was his normally tan face when he shot out of the river, clawing at the bank and dragging himself up onto dry land. He was a mess of scratches, but Erin and I weren’t in much better shape. Both of us lost our footing and went down the rapids ass over teakettle, bumping and half-drowning ourselves in our stupidity.

As I grabbed for something to hold on to, my head under water, body bent like God only knew what, I opened my eyes. In that second, everything slowed. I saw the jasper stone, sunlight hitting it through the water. The beauty of it, the perfect shape, the colors—I couldn’t worry about dying just then. I snatched that rock up and before I knew what was when, I was standing up and walking to the riverbank, where Erin and Timmy lay panting.

I was bruised and scratched, but I felt calm, not breathless or fearful. I tucked the rock into my briefs, and I don’t know why I did that. I never told them about the jasper. I never told anyone and when the trailer I grew up in caught fire, the dryer having overheated and lit a shirt that had fallen behind it, the only thing I grabbed was that stone.

Share what you thought about The Jasper Soul and earn reward points.