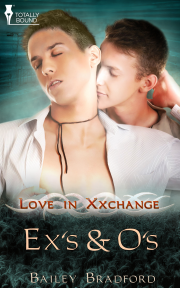 Book 5 in the Love in Xxchange series

Adam Masterson paid a steep price for doing the right thing, but it might be more than worth it if he can get through tough cop Les Stanton—and if they can survive one man’s plans for vengeance.

All Adam Masterson tried to do was the right thing—stop a psychotic man from hurting anyone else. While he may have succeeded, he also put himself in the crosshairs of the man’s wealthy father, and Adam soon finds himself battered, homeless and unemployed. When his mother is also evicted from her home, Adam packs up his car and takes Charlene, his mother, with him as he heads to Texas to plead for help from someone he isn’t sure will help.

When officer Les Stanton pulls over the beater car with Montana plates, he already knows who is in the vehicle. His friend Josh has been complaining about his partner, Nick, helping out the too-attractive blond from Montana. Les soon finds himself irresistibly drawn to Adam. Even his fear of Charlene can't keep him away. Now, if he can just let go of the past and learn to trust, he and Adam might have a chance-unless one wealthy man swearing vengeance destroys them both.

The jail cell door clanged as the dour looking cop slammed it shut. Adam ignored the way the guy leered at him through the bars.

“Have fun, boy. This ought to be just your thing.”

Adam stifled a groan and sat down on the floor, the only space available in the crowded cell. It’d figure the stupid fucking cop would just have to say something like that. He might as well have painted a target on Adam’s ass. Adam glared at the other men, most of them sneering but more than a few of them looking at him like he was going to be their next meal.

Yeah, not happening. Adam had grown up having to fight, his smaller stature deceiving many a bully into thinking he was easy prey. They’d learnt different, quickly. These skeezes would, too. He clasped his hands together, extending his arms out and cracking his bloody knuckles.

“Try me,” Adam growled. “I may be little but I will beat the shit out of any one of you who even thinks about touching me.” It was all about attitude, except when it wasn’t. As a big burly bear of a man snickered and stood up, Adam resigned himself to this being an even longer, more violent night.

Shit! Why do I always manage to find the weird ones? The only exception had been Nick, but he’d been pining away for someone else so he didn’t count.

Adam backed up, one hand slapping the mattress in a—so far—vain attempt to find his clothes. Mitch, his intended hook-up for tonight scowled and stalked towards him.

What a freaking waste! Again! From the waist up, Mitch was one of the sexiest men Adam had ever seen, his hair black as a raven’s wing, glossy and thick with luscious curls, his body ripped, muscles stacked just right, the perfect smattering of chest hair, dark, hard little nipples, cut—so nicely cut—abs. The bottom half, or more specifically, his dick, left a lot to be desired, but Adam could have made do. He’d had smaller. Barely.

“We agreed, no sex without rubbers.” Adam’s fingers ghosted over soft material which he quickly grabbed. Hopefully it was his shorts, the denim worn smooth from frequent washing. He was kind of too scared to look away from Mitch long enough to check.

Mitch glowered and matched Adam’s retreat step for step. “I didn’t agree to anything other than fucking!”

Obviously reasoning wasn’t going to work. Adam resorted to the emotion that usually took over when he got scared. Anger. “Look, you swizzle-stick dicked moron”—actually, a swizzle stick was longer—“I was very clear up front and I gave you a chance to get your head out of your ass—and that is the only thing going up your ass tonight—so stop with the stalking shit before I make you stop!”

Mitch laughed and lunged, both of which only pissed Adam off more. “Right, and what are you going to do? Run out of here with your shirt in your hand?”

Adam’s stomach plummeted. Of course he’d grabbed his shirt, a skimpy sleeveless denim number that wouldn’t do much to cover his ass much less his dangly bits.

Mitch stopped and grinned, which made Adam want to shiver. The man looked unhinged or high—or both. Adam really had to start being more selective in his choice of sexual partners. Mitch continued flapping his lips. “I’d just call my dad—you’ve probably heard of him, Mitchell Rollins the second? I’m the third, of course.”

Adam switched back to logic, desperate to bring this god-awful drama to a quick and painless end. “I’m sure your father wouldn’t approve—”

Another maniacal laugh from Mitch had Adam skittering around the foot of the bed. “He doesn’t give a shit what I do. If you tried to make a fuss, he’d either pay you off or run your scrawny ass out of town, so give it up already. You’re lucky I even want to fuck you.”

Adam stopped with the logic and let the stupid take over. “I’m lucky you want to fuck me? With that?” Then he compounded all of his prior mistakes so far tonight by laughing as he sputtered, “What part of me saying you have a teeny weenie didn’t you understand? I was still going to have sex with you regardless if you’d just bagged it with one of those rubber thumb things!”

Mitch roared as he leapt forward. Adam dropped the shirt and swung, thinking he really needed to learn when to shut up. The impact of his knuckles to Mitch’s jaw threatened to knock Adam on his not so scrawny ass but he locked his knees and grunted as pain shot up from his hand to his shoulder. He swung his left fist in a rapid follow up strike, burying it hard into Mitch’s stomach, which hurt worse than hitting the idiot’s jaw. The guy really must have abs of steel.

Springing back quickly as Mitch yelped and hit the floor with a thud that sounded painful, Adam hoped the man was down for a while. Long enough for Adam to get his shorts on and get out of there, at least. As far as he could tell, his shirt was now somewhere under the big lug’s body.

Spotting his shorts on the floor beside the bed, Adam picked them up and put them on, keeping an eye on Mitch’s prone form. He found his shoes, a battered pair of flip flops that he loved too much to throw away, then Adam was out the door and running. He got as far as the parking lot before it dawned on him he hadn’t thought to grab his keys, and it was that bit of panicked stupidity that had him standing there stunned like a spotlighted deer when the first cop car pulled into the parking lot a few seconds later.

Awesome addition to the Love In Xxchange series. Lex and Adam's story is packed with drama, action, love and danger. Absolutely loved this book. Can't wait to read the rest of the series.

It's well written, has an attention grabbing storyline and characters with unique and interesting personalities...blistering hot...These four guys I want to know more about and want to see again...

Share what you thought about Ex's and O's and earn reward points.