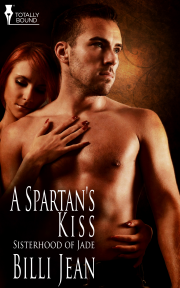 Book 2 in the Sisterhood of Jade series

After enduring centuries of life, Aeros the captain of the immortal Spartans, discovers his grey existence may end—in the arms of Tabithia. Only Tabithia is a witch guilty of crossing Ares, the god responsible for Areos' existence.

Tabithia has feared meeting the warrior an ancient hag once predicted would someday command her obedience. But when Tabithia takes a job guiding Aeros and his team of Spartan to a stolen artifact, her fear disappears under his slow, wicked seduction.

Aeros will battle anything to claim Tabithia and the future they could have together—even his god Ares—but when he learns the battle might be within Tabithia, he learns that true love does not come with a command.

The author has done an incredible job with her descriptions of the characters and the ability to keep your interest. For Paranormal fans, this is a fantastic start to her series and wil...

Share what you thought about A Spartan's Kiss and earn reward points.

Other books in the Sisterhood of Jade seriesView Series Page