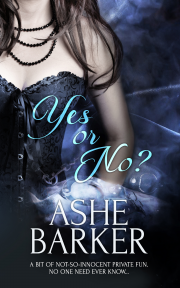 Be careful what you wish for… What’s your darkest fantasy? It can’t do any harm, can it? A bit of not-so-innocent private fun. No one need ever know…

There’s no harm in just filling in the form, is there? It’s only a bit of harmless escapism, a sexy fantasy. The advert is tempting, though.

Martha craves sensation. She yearns for intensity, for a touch to make her skin tingle and her nerve-endings sizzle, a caress to make her scream and demand her surrender. And that’s the problem. She’s a cautious soul and no pain slut. She’s not about to hand herself over to some ham-fisted Dom and trust to luck again.

So when she learns she is one of the winners who is to be offered the chance to play out the scene from her kinky imaginings to the letter, she can’t believe it. The only condition? The organizers reserve the right to select the Dom, one skilled in the specifics of Martha’s personal fantasy, and the scene must be played out in public.

You name it. You describe it, imagine it, dream it, savor it and share it with us.

We can bring it to life for you…

Martha sipped her herbal citrus tea, her nightcap of choice when she wanted—needed—to get a decent night’s sleep. The pungent aroma of lemon and apricots teased her nostrils and the tart heat slid down her throat. She clasped her mug between both her hands as she read the advert again.

It was a reputable online fetish site, one she used often. She occasionally interacted with others in the community there, but most of all she valued their absolute discretion when she needed to do a spot of shopping. She had bought things from time to time and they always arrived in the post packaged in respectable brown cardboard. Her collection now ran to a vibrating butt plug, a couple of electronic toys, lube and on one occasion, she had splurged on a rather splendid G-spot USB-rechargeable rabbit vibrator. It had proved a tad awkward when she’d tried to take that particular item through the automated baggage check at Manchester airport on her way to Ibiza, but the security guard had been very polite about it. He’d wished her a nice time and re-zipped her case for her.

She grinned, remembering. She had had a nice time—plenty of sun, sand and solitary orgasms in her five-star hotel room overlooking the Mediterranean. But that had been over six months ago and she hadn’t had a sniff of any action since. It was true she had been busy with work, but that was no excuse, not really. Her battery-operated boyfriend sat unloved in her bedside drawer along with her other fetishy bits and pieces.

Martha yawned, the herbal tea doing its work well. She shut down her laptop, set her empty cup aside and settled herself against the pillows.

It was only an advert, but a girl could dream.

As she lay, floating in that half-conscious existence between sleeping and waking, Martha rehearsed—and not for the first time—her own ideal sexy fantasy. She visualized the man—it had to be a man, she’d determined—who was a massive part of the turn-on for her. Her Dom would be a stranger or someone she did not know well. He would be handsome—of course—stern and demanding but not cruel. And he would be knowledgeable. He would know a woman’s body better than she herself did. He would understand her responses. Everything he did to her would be deliberate, controlled, purposeful. She would be helpless, vulnerable but utterly safe in his expert hands.

And she would consent to all of this because she trusted him. For a dream Dom, her fantasy lover was conspicuously absent for the next few hours. Martha spent a restful and dreamless night. She awoke, refreshed, to feeble strands of early spring sunshine piercing the vertical blinds that she had left open a fraction for just that reason. She glanced at her phone and saw that it was a little after eight, but she was in no hurry. She was not due in court until two o’clock to hear the judge’s summing up, and she was confident of the outcome. A conference call with her client’s solicitor was in the diary for eleven, but other than that, her chambers in Leeds city center did not expect to see her at her desk this morning. She had worked hard to get to where she was now, but Martha Prescott’s embryonic career as a corporate barrister was starting to blossom and she was well pleased with life.

That tea was good, she mused. Damn good.

She reached for the laptop and fired it up, intending to look over her notes for today. She expected to win, so her task would be to convince His Honor Lord Justice George Heatherington-Sloan to exact the heaviest restitution she could wring out of him on behalf of her client. And her firm was on a percentage, of course.

The advert from the previous night bloomed large on the screen. That had been a few moments of self-indulgent madness. Harmless enough, but she had no time for such frivolities now in the cold light of day. Serious business called. She scrolled the cursor to the little red cross then paused. She read the words again. Her dream memory danced and glittered, still fresh in her mind—vivid, sensual, beguiling.

She was no writer beyond the demands of her profession. Martha could rattle off complex legal reports and arguments on autopilot, but creative writing was different. It was more…unrestrained, unstructured. Creative writing lacked the safety, the certainty, the formulaic clarity of a finely-honed defense. It was messy and free-flowing. It could lead anywhere.

She started to write. Soon the response box beneath the advert was filled, but still she tapped at the keys, her words disappearing off the top of the screen. She paused from time to time to revel in the delicious shudders that caused her nude body to tingle and her pussy to dampen. Imagination is a wondrous thing, she mused as she wrote, unable to distinguish between truth and the filthy conjurings of her lively mind and over-active hormones. Perhaps that’s enough.

She wanted the feel of it. Needed that, nothing less. Martha yearned for the reality, the tingle and shiver. She needed to drip with a level of pure arousal that she could not rein in. She continued to write.

Half an hour later she sat back and re-read her piece. She reached for her faithful but woefully neglected rabbit.

A likely story, she told herself. Still, it had been fun.

Share what you thought about Yes or No? and earn reward points.