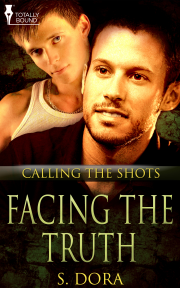 Book 1 in the Calling the Shots series

Sometimes the question being asked, might not be the one that actually needs to be answered.

When twenty-two year old Tom asks his older, conservative lover Isaac for an afternoon of kinky sex, that experience turns out to include much more than bondage, adult toys and spanking.

Both are surprised to discover Isaac's need to dominate his lover as much as his lover needs to be dominated by him.

Isaac Newhouse knew that voice like he knew his own thoughts. “Yes, Tom?”

“Why don’t you tell me? Probably the worst you’ll hear from me is ‘sorry, this time it’s no’. And you know very well there isn’t much of a chance of that. I admit I lack somewhat in the fantasy and imagination department, but luckily I have you for that.” Isaac smiled reassuringly. “Unless you’re asking me to go to a bar, pick up a stranger and have sex with him while you’re watching us, because that is one of the very few things I’m unable to give to you.”

“What…? You think I’m some kind of pervert?” Tom huffed. “It’s nothing like that at all. I want you to tell me what to do. That’s all. As long as it has something to do with sex, of course, in case you’re thinking about the kitchen floor needing a good scrub.”

Isaac scratched his head. He loved Tom with all his heart, mind and body, but during moments like this he couldn’t help but wonder if they even lived on the same planet. “Tell you what to do? Why? When I’m in the mood, you’re always more than willing to have sex. What more could I possibly ask of you?”

“This was a stupid idea.”

“Not stupid.” Isaac touched his lover’s shoulder. “Please don’t say that. But do I understand correctly? You want me to ask you to perform a number of sexual acts over the day and you promise to do them?”

“Sort of.” Tom shrugged. “It’s the weekend, we have two days to ourselves and I’ve been having fantasies about being dominated by my strong older man.”

“Please don’t think what I think you’re thinking. I don’t want you to be a domineering brute who couldn’t care less about me. I love you for being sweet, patient, introverted, old-fashioned you. Knowing you, you’re going to order me to do things I love anyway.” Tom gave Isaac a quick kiss. “Just pretend you’re a bit more dominant than we both know you are, please?”

Isaac kissed him back. “Promise you won’t be disappointed?”

“That would be a first. Perhaps you don’t have a natural talent for kinky stuff, but you’re willing to give almost anything a try because of me. And oh, man, that is really something.” Tom now stood even closer to Isaac.

“Getting excited about what I might ask of you? Wondering if it’s something we’d usually do anyway? Perhaps I’m going to order you to go to the drawer where you keep all the sex toys and lube. Or perhaps…” Isaac teased his lover.

Tom ghosted his lips against Isaac’s ear. “You think this might be the perfect moment to confess I bought some new stuff online?”

“You did, eh? Then I have to personally inspect the sex toys drawer to see if I actually approve of what you’ve bought. Now, you be a good bloke and make us a cup of tea while I take a look at what you ordered at the web-store for grown-ups.” Isaac patted Tom’s behind and walked straight to their bedroom, knowing when he got back there would be two mugs of hot tea on the table and one extremely eager Tom waiting for him on the couch.

Tentatively, he took the larger-than-average butt plug in his hand. The solid weight of smooth black silicone was something he both could and couldn’t imagine pushing inside his lover’s arse, keeping him stretched and ready for almost immediate use. Once the plug was fully inserted, the flat round disk would be the only reminder of what was hidden inside. Isaac realised Tom could wear the plug while fully dressed.

He didn’t even look at the other recent purchases. This was more than enough for now. He placed the plug on the bed, together with a full bottle of lube. After getting a towel from the cupboard, he looked one more time in the toy drawer and hesitated at the sight of the leather cock ring, remembering the last time Tom had used it. He tried to ignore the erection pushing against the fabric of his cotton boxer shorts.

Although, why should he?

This was a really sweet story about a nice couple that doesn’t want to be the typical dom/sub, in as much as they want to explore that on their own terms.  Quite enjoyable and recommended for those...

Share what you thought about Facing the Truth and earn reward points.