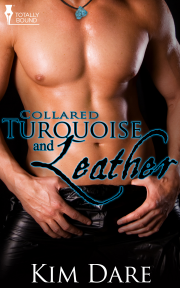 Book 1 in the Collared series

An untrained submissive might not be what George wants, but Eric could be just what George needs.

George McAllister knows better than to hook up with an untrained submissive. He doesn't have the patience to guide a novice through his first kinky experiences. His lovers know what they are doing and do what they are told. When he sees Eric dancing on top of a table in a kinky club, he assumes the beautiful young man is an experienced submissive. Then he sees the turquoise and leather on his neck and recognises it as a collar. Someone else already owns Eric. George has no choice but to walk away.

Eric Jordan doesn't know much about kink and he has no idea why George is suddenly less than enthusiastic. But he knows what he wants and if he has to chase after George to get it, so be it. If George wants to believe the pretty bit of rock on his necklace means something kinky, that's fine. But Eric doesn't belong to anyone but himself and he won't give up possession of himself for one night in George's bed.

An untrained submissive might not be what George wants, but he could be just what George needs.

The twirling spotlight hit the table dancer for one perfect moment. George McAllister stalled on the edge of the dance floor, savouring the view. The light moved on, leaving a shadowy outline in its wake.

George held his breath. One bright flash, a glimpse of an open white shirt and black leather trousers, and darkness returned. Mesmerised by the sway of the young man’s body, he blindly moved closer, his eyes slowly adjusting to the intermittent darkness.

Another arc of light found the right spot, displaying blond hair and tanned skin for his appreciation. He stopped to admire the brief image before it disappeared again.

Sidestepping dancers, George moved a few paces closer. A flash of light illuminated the dancer’s face. Eyes closed, lips slightly parted, the dancer threw his head back and gave himself over to the pounding beat of the music. Undulating to the rhythm, the dancer’s hips traversed intricate patterns, begging for a partner to complete them.

George swallowed and altered his stance, allowing his rapidly growing erection more room in his trousers. He was only vaguely aware of the rest of the club until someone barged into him. He spared one brief glance for the man who collided with him. That was the trouble with these new clubs — too many bodies all crowded together and not enough good manners to go around. George thought back to the way leather clubs used to be —back before leather turned into a damn fashion statement rather than a sign of dominance and submission. There was a lot of be said for formal rules and everyone knowing their place.

The song ended. He looked back up to the table. A red headed man climbed the ladder onto the high pedestal and filled the now vacant spot.

At six foot four George was tall enough to see over most of the crowd, but he was still half way across the dance floor. He couldn’t make out a blond head of hair winding its way through the press of people.

A new song and a faster tempo brought rapid bursts of light to the dance tables. Every few seconds the whole room lit up then plunged back into darkness. George nudged people out of the way as politely as possible, searching for the dancer.

The music pounded through the room in a thumping, rutting rhythm. In the middle of the song, George spared one glance up to the tables. He found him. The dancer hadn’t descended. He’d merely migrated across to another table top, connected to the first by a narrow platform. With his back to George, the dancer lifted his arms and pushed his hands through his hair. His white shirt lifted and exposed his back, revealing tantalising glimpses of golden-brown skin.

As well as George could judge from his position several feet below the platform, the dancer was close to his height. But he was of a far slighter build. His cut off shirt sleeves revealed muscular arms. For a brief moment he turned and showed a well developed torso with defined abs. It was the lean muscle of a runner rather than the bulk of a gym junkie. He was just George’s type. George stopped again, hypnotised by the dancer’s movement. A little voice in the back of his mind piped up, telling him a thirty-year old dominant should have more self respect. He should be ashamed of acting like a submissive teenager at his first school dance. His cock didn’t give a damn. It reverted wholeheartedly to teenage enthusiasm.

For the first time in years, George could ignore the loud music and jostling crowd. In his mind’s eye, he saw the table dancer spread out on his bed in his apartment. Golden skin sprawled against crisp white sheets. Black leather wrapped around the dancer’s wrists and ankles. In the silence of the fantasy, he heard a hush broken only by his lover’s frustrated whimpers as he teased him to the edge of his orgasm. George felt the smooth bare skin under his hands. The dancer arched into his touch, begging for more.

George’s fingers twitched. He imagined burying his fists in the thick blond hair, holding him in place so he could take his pleasure as he wished. His cock jumped again. He pictured the dancer kneeling submissively in the middle of an empty room. The dancer’s breaths coming in gasps, he broke their silence to whisper just one word — Master...

He hadn’t felt such an instant pull towards another man in years. For all his sarcasm about the leather hook up spot, the club eliminated any need for subtle questions. Everyone was gay. Everyone was kinky.

This is the first book that I have read by Kim Dare. After reading a sample of the book where Eric is dancing on a table, I knew that I had to read the whole book. I am so glad that I did. I loved these...

Share what you thought about Turquoise and Leather and earn reward points.

Other books in the Collared seriesView Series Page