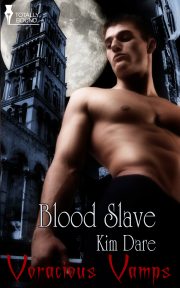 Keats may have reluctantly agreed to admit that vampires are fantasy and not reality. And he may have promised his friend that he would stop searching for them. But people who merely think they are vampires are still fair game for a fun night out.

Leland has been resisting the temptation to bite his friend for months, but when he sees Keats wander calmly into the middle of a Halloween feeding frenzy, he no longer has a choice. He has to claim Keats as a private blood slave before he ends up becoming the community property of his clan.

Everything rests on his ability to convince his clan he can bring the bratty submissive to heel. It's going to be very long night…

1.6em;">The smaller man clawed at the leather as Leland Hawkes wrapped it tight around his throat.

"Are you insane?" he demanded.

Keats Metcalf wriggled against him as he struggled to turn around and look over his shoulder. "Leland?" he gasped.

Leland relaxed his hold on the collar just far enough to let his friend drag a little air into his lungs.

Keats tugged at the leather again, fretting about the restriction around his neck as if that was the only thing in the world he needed to be worried about right then. "What are you doing here?"

"Stay still," Leland snapped, doing up the buckles and fastening the wide collar tight around the other man's neck.

Keats reached around and tried to slap his hands away, but that was little more than an irritating distraction. The final fastening clicked into place. The thick strip of leather practically covered Keats' entire throat.

It made Leland feel just a fraction better about the world.

Spinning his friend around, Leland pushed the smaller man up against the wall and held him easily in place with a hand in the centre of his chest. "What are you doing here?" he demanded.

Leland glared down at his friend. Keats returned his inspection, all big blue eyes and floppy blonde hair. All ridiculously childish games wrapped in a grown man's body that made Leland's cock rise and his teeth ache.

"What are you doing here?" Leland asked again, saying each word very slowly as he fought to control both his temper and his libido.

Keats tilted his head on the side as he studied him, obviously not the least bit afraid of the fact a man with twice his strength had him pinned to the wall. He also seemed entirely at home with the fact he was stark bollock naked.

Leland took a deep breath and glared into Keats' eyes despite the temptation to drop his gaze and admire the best view of Keats that had ever come his way.

Leland stared down at him. "You're…" He shook his head. Even for Keats, that was a new kind of crazy.

Keats squirmed against his hand, trying to push himself up onto his tiptoes and whisper to him. Against all sense, Leland found himself leaning down to make it easier for Keats to brush his lips against his ear.

Every muscle in Leland's body tensed. "What?"

Keats lips teased his cheek as he grinned. "They think they're vampires."

"They think they are vampires," Leland echoed as he straightened back up to his full height.

Keats looked just a tiny bit repentant—like a puppy that had been caught chewing a slipper and now regretted displeasing his master.

Share what you thought about Blood Slave and earn reward points.

Buy Now: £2.99
While Under the Influence