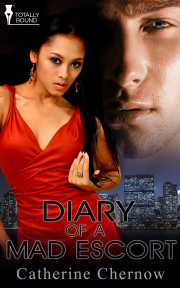 Diary of a Mad Escort

Grace Barry leads a double life. By day, she's a smart, savvy financial consultant. By night…a sultry, seductive, paid escort providing fantasy sex to New York City's wealthiest financiers. Grace, a.k.a., Ginger, arrives at her clients' hotel rooms in her office clothes, looking like one of their own, but tucked away in her handbag are her sheepskin lined handcuffs and little whips.

One evening's sojourn to wealthy stockbroker Mark Chase's hotel room changes Grace's life forever. She slips her card key into the door…and discovers Mark's dead body sprawled on the floor. Fear makes her run, straight into the arms of FBI agent Alex Winter—a man with a deadly secret…a man whose heart is as cold as ice. Now, Ginger must raise money for her defence. In a bold move, she offers her private diary for sale to any news channel willing to pay.

Alex Winters' frozen heart matches his ice-blue eyes…and his name. His fellow agents call him 'Iceman' and he has no patience for beautiful, scheming murderers like Ginger Berry. She's the #1 suspect in the death of wealthy financier Mark Chase, but Alex's fascination and attraction to the scheming call girl gets in the way of his investigation. As Alex unlocks the secrets surrounding Mark Chase's death, he unwittingly places Ginger in danger. When her life is threatened, it will be up to Alex to protect her, and keep her from publishing her diary of a mad escort.

Mark opened the door just as Grace arrived at his room on the eighth floor of the Marriott. He pulled her inside, his hand squeezing her upper arm in a tight, vice-like grip.

“Ginger,” he whispered, his mouth closing over hers, slipping his hand inside her Armani jacket. He lifted the hem of her black silk tank top and ran his hand underneath, his fingers opening the front catch of her bra. She moaned into his mouth as he rolled her nipple between his thumb and forefinger. A shot of pleasure, combined with just a hint of pain shot down her belly and settled between her legs. “Ginger,” he tore his mouth from hers and whispered in her ear, “I’m glad you’re here.”

“So am I,” came her response—one Grace had uttered too many times to count.

He backed her up against the door and continued to caress her breasts, cupping them in his large palms, lifting her shirt so he could bend down and suckle them.

“Wait, Mark, I…” She couldn’t catch her breath. “What’s wrong?” she grasped his head between her hands, her fingers digging into his scalp. He cried out but didn’t stop as her long, red nails scraped his skin.

Mark liked pain, but tonight, something wasn’t right. She could feel the tremors running through his tall frame, could smell his sweat. The odour of fear hung around him, its pungent smell drifting by her nose.

He stopped touching her bare breasts, easing her shirt down over her belly. Running a hand through his hair, he gazed at her, his big, dark eyes solemn and…

For just a second, she thought she saw fear in his eyes. One minute they appeared large and round, the next…they shrunk, concealing the emotion she swore lay hidden there.

“I think someone’s following me, Ginger. I think…that someone knows what I, I-I mean, what we do here.”

It wasn’t like Mark to stumble over his words. Smooth, savvy, handsome Mark Chase, one of New York’s wealthiest financiers. His list of clients read like the who’s who of the money world.

Mark walked across the room towards the small bar in the corner. Grace thought she saw a tremor shoot through him—his body shook for just a few seconds with the same tremors she thought she’d felt earlier.

He poured himself a glass of scotch.

Mark never drank. Prozac was more his speed. Except, of course, when he was with her.

“You’re better than any drug,” he would tell her.

But tonight, she saw how he needed the liquor.

“I don’t like feeling this way,” he glanced out the windows, at the magnificent view of the Statue of Liberty and the blue water of New York’s harbour.

She walked over to him. “What’s wrong?” He seemed pale, and when she ran a hand down his back, she could feel the tight, tense muscles underneath his shoulder blades.

He drained the glass, gulping down the last few sips of the amber-coloured liquid then turned to face her, his eyes hard. “Someone’s following me, watching my every move.”

“You need—” She stopped.

He beetled his dark brows. “What?”

She wanted to say, “more Prozac” but didn’t. Even though she thought that’s exactly what he needed.

And what she didn’t need tonight was a tense under-medicated client.

You’re better than any drug, Ginger…

It was time to prove it.

“Come on,” she grabbed his hand and led him over to the bed. He followed behind, like a docile child not stopping until his knees bumped the mattress. “Let me help you…relax.” She did her sexiest, deep-Ginger voice, knowing that what Mark liked most was that she really didn’t look the part she played. Her Armani business suit made her look like one of his own. It made it easier to relax—to be around her, knowing that she travelled in his world, understood his problems, his needs…

It was always about him.

That’s why he paid her the big bucks. Her eyes caught sight of the large wad of cash sitting on the bedside table. It would be hers for the taking when she finished her “facilitation”.

Ginger began a slow striptease, easing the herringbone jacket from her shoulders, Mark’s dark eyes following her every move. She tossed the jacket on a nearby chair then drew the silky tank top up and over her chest, the smooth material caressing her nipples. The cool, air-conditioned air blew across them, making them stand at attention. She gazed down at Mark’s crotch…he stood at attention, too.

A tiny flicker of heat leapt into his eyes.

Bare-breasted, she reached into her bag and withdrew a small whip. “Lie down,” she commanded.

He stretched out onto his back on the bed.

“I’ll make you forget all this foolishness,” she crooned. “All this talk of someone following you.”

Ginger hiked up her skirt to reveal…nothing. She wore no underwear beneath her Armani skirt. Mark’s eyes travelled to her smooth shaven mound, his gaze resting on the two little folds of flesh covering her clit. A muscle jumped in his cheek. He swallowed hard. When she placed her hand against his chest, she could feel the rapid beat of his heart. 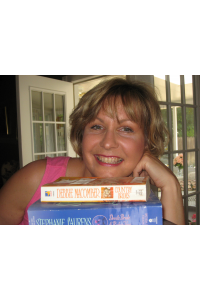 I sank my writing teeth into my first romance novel after years of reading my favourite authors…Linda Howard, Karen Robards, Kat Martin (just to name a few!) Those ladies inspired me to write my own romances and now, it's my passion.

I'm fascinated by the paranormal…I love to be scared. Ghost stories are my favourite. As a child I read 'The Haunting of Hill House' by Shirley Jackson (it was made into a movie a couple of times…a good one to watch with your favourite honey…and cuddle up to when it gets real scary!) That book made me want to write ghost stories and heightened my interest in the paranormal. I also enjoy writing spicy, sensual, modern-day romance with an added twist of suspense.

Born in the land of the 'Midnight Sun' ( Fairbanks, Alaska ), I'm an 'army brat.' When my mother's plane landed at Ladd Air Force Base in Fairbanks (no army base…they had to share with the air force back then!) she didn't want to get off - she and my sister were decked out in heavy winter coats and boots - my mother figured it was always icy cold & snowy in Alaska. Meanwhile, it was summer - and 100 degrees! My father stood there waiting for her on the tarmac in a short-sleeve shirt, shorts & sunglasses. She never forgot the experience - and neither did my father. That summer, my mother said the sun never set - there was 24 hours of daylight. Soon we moved on, and at the tender age of three, my family and I settled on Long Island, where I've resided ever since. Long Island's North Shore 'Gold Coast' is where many of my books & stories take place - it's beautiful! Cliffs that look out over the Long Island Sound…a rocky, sandy coastline where pirates once smuggled in contraband…and fabulous old mansions from 'old money' families abound.

When the hubby and I are not on the go, we're spending time with our two terrific children (now grown) and…our two cats.

5 out of 5! Reviewer Top Pick I just loved this contemporary thriller from Ms. Chernow. I was thoroughly entertained and sitting on the edge of my seat throughout the entire story. My heart was racing...

Grade A! Outstanding Read. Filled with ups and downs and more sexual tension than you'd believe possible, the Diary of a Mad Escort is a great story.

Share what you thought about Diary of a Mad Escort and earn reward points.