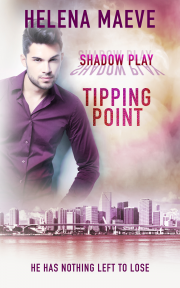 Book 4 in the Shadow Play series

He has nothing left to lose. That makes him dangerous.

Ex-con Elijah has run out of ways to make ends meet. Picked up by police in a bum-fighting sting, his only hope is the sister who landed him in prison many years ago. But catapulted into a world of veiled state interests and deadly secrets, Elijah soon finds himself torn between a past he cannot outrun and a spy whose dilemma he understands better than he’d like.

Nate, an Englishman whose comings and goings are as suspicious as his gratuitous kindness, offers Elijah the second chance he didn’t realize he was praying for. It’s not long before living out of each other’s pockets brings clandestine desires to the surface, threatening the fragile peace Elijah finds in Nate’s home. A peace that may have been nothing more than a smokescreen to begin with.

Elijah didn’t know what he was doing at the precinct.

He’d tried to explain to the cops that he hadn’t seen anything and didn’t want to press charges—not that anyone had offered him a choice—but no one listened. The flurry of uniforms around him was too intimidating to try again.

After a while, words expired in his throat. His voice became a strangled whisper.

The officers responsible for his arrest seemed to find themselves in a similar predicament. Their chests puffed as they briefed superiors and ADAs on the facts, but the odds were already stacked against them.

The young, all-American entrepreneurs with the pricey camera equipment had lawyered up within minutes of being processed.

Bemused, Elijah looked on as suits patrolled between jam-packed desks, wielding cell phones and briefcases like weapons of war. He knew how the next round went. It was only a matter of time before the cage door opened to expel those who could afford to drop twelve hundred dollars for an hour behind bars, plus bail.

Down the steel bench that made up the only seating inside the cell, his would-be employers couldn’t have been more relaxed. One had his feet crossed under his skinny ass and was methodically sticking chewing gum to the cinderblock wall behind him. Another was making eyes at a blonde officer on the other side of the bars. She could have been his mother, but that didn’t deter him.

These were the people who made it through the justice system with a mere slap on the wrist.

Tamping down the flash of bitterness was difficult, but Elijah had no other choice. His window was closing fast.

With a hollow in the pit of his stomach, he shuffled the five or six feet closer to the pair.

The chewing gum artist flicked a glance his way. A sneer was forthcoming, Elijah was sure, but he could live with that.

“When do I get my money?” he blurted out, before either half of the smug pair could pipe up to tell him to get lost.

Bewilderment crept onto the boy’s face. “What money?”

Elijah dug his overgrown, blackened fingernails into the meat of his palms.

“Fifty bucks. You— You said if I won three fights, I’d get the cash.” He despised the quiver in his voice but couldn’t calm down enough to bring it under control. His ribs still ached from that stray punch in the second match. He wanted nothing more than to curl up under a bridge somewhere quiet and catch his breath. Bruised ribs would heal up in a few days if he didn’t move around too much.

This the sixth book in the series is another highly enjoyable read...if you like espionage, and often illicit romance between guys with more secrets than even they can comprehend – well, you will...

Share what you thought about Tipping Point and earn reward points.