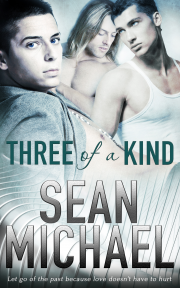 Three of a Kind

What’s better than a pair? Three of a Kind of course!

Zane is about to give up by the time his truck breaks down in Arizona. All he has in the world is the truck, less than fifty bucks and more bruises than any one young man should have to bear. That’s when he meets buff giant Butch who takes Zane in, helping him get his life back together.

Problem is, Butch already has a lover, an artist named Randy. Or at least Zane thinks it’s a problem. Turns out, it’s not the kind of trouble Zane thinks it is when Butch and Randy both take a romantic interest in him.

Can Zane let go of his troubled past and let Butch and Randy teach him that love doesn’t have to hurt?

Reader Advisory: This book contains references to past physical abuse.

Publisher's Note: This book has been released elsewhere. It has been revised and re-edited for re-release with Pride Publishing.

Zane looked at the mile marker then at the map.

Then at the big-assed saguaro outside then at the white smoking pouring out of the engine.

Zane looked at his fingers shaking and trembling against the steering wheel. There was a deep cut in one of his knuckles and it was red and raw. Hurt.

Didn’t hurt as bad as some of him, but it was something to focus on. Something to look at while he sat in the middle of bum-fuck nowhere Arizona, trying not to run in blind circles, screaming.

Headlights lit up his rear-view mirror, the truck slowing, pulling up behind him. Zane grabbed his hat, pulled it on, told himself not to panic. Just a Good Samaritan. Okay.

The guy who got out of the truck was tall, wearing jeans and a wife beater. He came up to the window. “Hey. You okay?”

Zane nodded, tugged the brim of his hat down a little. No. No, he wasn’t okay, but he wasn’t in Abilene anymore, so that was all right. His nose was broken, for sure, maybe his cheek and he was scared to try to take his shirt off. “Truck blew the water pump.”

“I’m not surprised. This thing looks like it belongs in the junk heap. In fact I think I might have a few there looking in better shape.” The guy went around to the hood and put it up, checking out his engine.

Zane slid out of the cab, heading for the front. “I don’t suppose you have some duct tape and water to spare? I’d be real grateful.” He ached, deep inside, and just wanted to get to San Diego, see the ocean.

“I probably got the duct tape, but not that kind of water on me.” The guy slammed the hood and bent a little, peering at his face. “You’re almost in worse shape than the truck.”

“I’ll be okay. Someone’ll be by with water. Thanks for stopping.” He’d sleep in the truck and figure shit out in the morning.

The guy snorted. “This time of night? You’re lucky I happened by.” The guy nodded at his truck. “Come on. I’ll take you home and you can clean yourself up. Tomorrow I’ll bring you out and the tow truck can get this puppy to the junk heap.”

“I… If you’ve got a spare water pump, I could install it in the morning.” If it cost less than the thirty-seven dollars fifty in his pocket.

“Sure, we can see what there is. Hell, it’s a junk heap, there’s bound to be something you can use.” A square hand was thrust out. “Butch Serno.”

“Well, let’s see if we can end this one with a bit of antiseptic and sleep.” Butch led the way back to his red pickup.

“Y…you’re sure? I…I ain’t got much cash to pay for a night.” God, he was tired, and if this guy was going to hurt him, he thought he’d rather just lie down and die.

“Oh, I think I can manage to put a scrawny pup like you up for a night without expecting anything in return.”

“Thank you, sir.” He pulled down his hat again, grabbed the trash bag with what was left of everything he had, something deep inside him screaming as he lifted. Please, God. Let him get to wherever without breaking down.

The garbage bag was taken from him and put in the back of the truck and the passenger door opened. “You think you can get in without making a face like that again?”

“I’ll give it my dead level best.” He eased himself up, sitting gingerly.

Butch got up behind the wheel and started her up, heading back out onto the road. “How badly are you hurt?”

Butch nodded, quiet for a while before they turned into a long lane that led to a junkyard. “I got a roommate. So you know.”

“I won’t cause no trouble. I swear. I’ll be out of your hair in the morning.”

I think that Zane is just extremely sweet, caring, funny, and a heart of gold type of person and that is one of the things that Zane needs in his life. Then there is Butch and he is strong, caring, and c...

This is a strongly emotional read, one that I really loved.

This is a romantic, fun read filled with odd characters, laughter and sunshine. I really loved it.

I can strongly recommend this story...

Share what you thought about Three of a Kind and earn reward points.