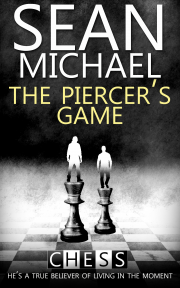 Book 6 in the Chess series

Temple is a cancer survivor, coming up on five years cancer free. He’s traveling across North America on the back of his motorcycle, just going where the wind blows him. Ever since first being diagnosed, he turned into a true believer of living in the moment.

Luke finished doing his orders and the taxes, then rolled his head on his shoulders. Tired. He was tired and ready for a beer and a burger. He headed out of the little office he shared with Donny, waving at his best friend and partner as he passed by.

“I’m going to bail. You need anything?”

Donny shook his head. “No, I’ve only got another ten minutes or so left and Armen is picking me up. Turn the sign to closed, though, will you?”

“Yeah. Don’t do anything I wouldn’t do.” Donny winked at him.

The bell over the door jangled as the door was opened, a tall, skinny, bald man in leather walking in.

He and Donny looked at each other, wincing. No one was going to want to start something new this late in the evening.

“I’ll handle it,” Luke offered. It was probably just a question anyway, right?

He headed to the door, offered the dude a grin. “What can I do you for?”

“I’d like a tattoo, I think. Are you the tattoo artist?” The man had a gravelly voice, like he’d swallowed glass or something, and his eyes were so brown. They seemed huge, too, probably because of the bald head.

“No. I’m the piercer. Would you like to make an appointment?”

“I’d like to talk to someone first. Can I talk to you?”

Donny was swamped and about to leave anyway, Bill and KT were both working on big pieces that were going to take them until well past closing, so no one else was currently available. “Absolutely. Talk away.”

Those brown eyes took him in. “Yeah, I think you can help me.”

“Well, I’m the co-owner, so I hope so.” Just look at those pretty eyes. Luke could happily spend some time thus occupied.

One big hand was held out to him. “Temple Garrison.”

“Luke. Pleased.” He shook Temple’s hand, a jolt of electricity passing between them. Wow, he’d never felt anything like that.

“Hi.” They were just standing there, holding hands like that zap had fused their flesh. “Jesus, sorry. Sorry, man.” He let his hand drop, feeling like a bit of an idiot.

“No, no apologies necessary. You felt it too, eh?”

“There somewhere around here we can sit? Have a bite to eat?”

“I…” Okay, that was odd. Intriguing, though. Surprisingly. “Jack’s Diner is two doors down.”

Wait. Had he just agreed to eat with a stranger? At least it would be in public.

Temple smiled, looking pleased as punch. “Okay, let’s do it.”

“Let me grab my phone.” He headed to the office. “Going to Jack’s, having a bite with a customer.”

“What? Why?” Donny demanded.

Donny gave him a glare. “A repeat customer?”

“I’ll have my phone, man.” And Jack’s was practically next door and there was that whole ‘in public’ thing. Still, Don was a good guy. A genuinely good guy.

“I know, right? Weird.” He gave Donny a smile and headed back out, turned the sign around on the door. “You ready, man?”

Temple straightened from where he’d been leaning against the counter. “I am.”

“I’m sure they do.” Even if Luke thought a salad was a weird choice for a tall, bald guy dressed all in leather, he tried not to make judgments like that, but this guy screamed biker and he had yet to meet one who was into salads.

“Cool.” Temple walked along next to him, long legs just eating up the pavement.

The walk didn’t take long enough to even talk, the well-lit diner inviting in the late summer night.

If you like hot men enjoying hotter encounters, if slowly building trust is something you like to see, and if you’re looking for a read that is as filled with sensual experiences of all kinds as it...

Share what you thought about The Piercer's Game and earn reward points.