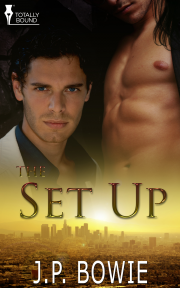 When John White Eagle, a movie extra, agrees to some covert sex with Greg Mathis, the movie's star, he's not at all prepared for the repercussions. Alone in a motel room — apart from a dead body — he finds himself to be the only suspect, but a sympathetic cop, Mark Rossi, agrees to help him clear his name.

The two men quickly discover a mutual attraction, a situation that is thrown into jeopardy when some incriminating evidence points to John's guilt. John persuades Mark to let him confront the move star face to face in order to extract a confession from him, but John's plan goes wrong.

Will he be the next to die, or can Mark reach him in time to save him, and their relationship?

The women prepared me for the fight to come. They painted my body, placed feathers in my long black hair and handed me the weapons necessary for what was to follow. Around my hips, they placed a beaded belt from which hung a breechclout of softened skin. With small smiles, they stood back, watching as I left them to make my way to where my assailant waited.

The tall grass hid me from his watchful gaze. I could see him outside his cabin, slowly walking the perimeter of the land he said was his. He was shirtless, and in his hand, he carried a rifle. He was prepared for danger, but I did not fear him, for I was a young warrior, strong and skilled in the art of hand-to-hand combat.

The sun slowly sank behind the trees as I watched him turn his back to me, pick up a dipper from beside the water trough then take a long drink to slake his thirst.

This was my signal.

I sprang to my feet and bounded forward, tomahawk raised to strike. He turned, parrying the blow with his forearm, then gripped my wrist, forcing me to drop my weapon. I struggled to free myself, but he tripped me, the two of us falling heavily to the ground, the white man on top of me. Silently, we wrestled, each of us straining to gain the upper hand. He was heavier than me, his body solid muscle, his flesh warm and covered with smooth skin...

“Cut!” The cry rang out, and we stopped fighting. Sitting astride me, and in no hurry to stand, my “opponent” looked to where Blaine Harrington, the movie’s director, stood with the rest of the film crew.

“We’re losing the light, Greg,” Harrington yelled. “We’ll pick this up again tomorrow.” That was good news for me. As a film extra and occasional stuntman, I could always use the extra day’s pay. Greg Mathis, the star of the movie, looked down at me ruefully.

“Hell, I was looking forward to roughhousing with you a bit longer there. You look pretty authentic in that getup.” He ran a finger over my chest. “Does that colour come off?”

“No,” I laughed. “That’s real. My grandparents were both Native American.”

“Yup.” I smiled at him. I was proud of my long black hair and had refused to cut it despite several requests from wardrobe people and costumers. “You going to let me up?”

Grinning, he pushed off me then held out his hand to help me to my feet.

“Say, why don’t you come over to my trailer? Have a beer? We can run over the moves we need for tomorrow. I don’t think I’ve got it quite right, do you?”

He was lying, and we both knew it.

We had rehearsed for the better part of an hour earlier in the day, and it had left me in a fair degree of arousal. Greg Mathis, a master of self-defence, had actually been the one to show me what was needed in our short fight. Naturally he was going to win—he was the star—and after a couple of deadly blows to my chest and chin and a knife through my heart, I would be stretched out on the ground at his feet.

Now he wanted to play, and I wasn’t about to argue with him. He was, after all, six-one, one hundred ninety pounds of solid lean muscle and one of the best looking men I’d seen in a long time. His flaxen coloured hair hung over his brow in waves. His blue eyes twinkled from a tanned and unlined face. He was twenty-nine, four years older than me and the epitome of male virility, reminding me of an early Robert Redford.

I was young, single and fancy-free. There was no way I was going to turn down his offer of playtime.

“Right...John White Eagle.” He said my name slowly as though he didn’t want to forget it. “See ya in a few.” As I turned away, he added in a low sexy voice, “Nice butt, John.”

Back at the wardrobe tent, I stood in front of a full length mirror, and for the first time took a really good look at how they’d decked me out for this part. It was definitely Hollywood’s idea of what a “Red Indian” should look like. Feathers sticking out of my hair, war paint smeared over my face, arms and chest, and a scanty breechclout that I had to admit looked kinda sexy, though that probably wasn’t the intent.

I was proud of the fact that grandmother had been a full-blooded Dakota Sioux, but this was no time for reflection.

5 out of 5! I absolutely loved the characters and the novel. Mr. Bowie has written a fantastic book that delivers action and suspense. This is a story you don't want to miss.

As an avid reader of J.P. Bowie's books, and having just finished My Vampire Lover, I was eager to read another from this prolific writer. The Set Up sure does not disappoint! A hot story, hotter men...

Share what you thought about The Set Up and earn reward points.