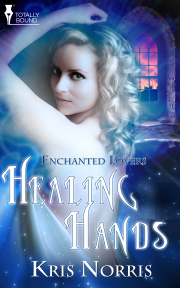 Book 1 in the Enchanted Lovers series

Mira has only five days to lose her virginity, or face certain death…and only one man is up for the job.

Shunned by her Kingdom because she's been given the gift of healing over fire, Mira anxiously awaits her freedom. All she has to do is complete her Rite of Passage and pass the auspicious Ritual of Sisterhood. There's just one catch. If she doesn't lose her virginity before the Ritual begins, she'll die. And just her luck, none of the Kingdom's tutors will touch her.

Hoping to ensure failure, Mira's been given a tutor with a curse of his own. Hailing from Garinth, Keegan's plagued with a serious problem. His body only reacts to women who possess certain qualities. So when he wakes to find himself imprisoned in a Kingdom ruled by witches, he can't imagine how any of them measure up. But then, he never counted on Mira, or the way his body comes to life, filling his head with delicious images of seduction.

He'd love nothing more than to tame this pretty little witch, but can he claim her before their time runs out?

Keegan fell to his knees with a harsh curse. He braced his weight on his hands, stumbling to rise, only to be knocked across the back. Pain splintered through his body, spiralling inwards, purging the air from his lungs in a loud hiss. Rough stone connected with his cheek followed by the warm trickle of blood down his forehead.

“You wear the seal of the Kingdom of Garinth, do you not?”

Keegan could only nod, his throat too dry to speak. He moaned as the woman released him, pushing him back to the floor.

“Excellent. You’re just the type of man I’ve been searching for.” She laughed, a shrill sound that sent shivers down his spine. “How fortunate for me you decided to invade my land.”

His head snapped up. Invade her land? He’d done nothing of the sort. He’d merely stopped to seek shelter from a storm when he’d been ambushed and knocked unconscious. And if his memory served him correctly, he’d been outnumbered seven to one.

“No.” He choked the word out. By the Gods, he hurt. What in all the Heavens had they done to him?

“Are you implying Queen Vestna of Corand is lying?” The woman shot him a sly smile. “That could be considered treason. A crime punishable by death in my land.” She sashayed over to him and placed a cupped hand under his jaw, lifting his head until his eyes met hers. “But don’t worry. I have no desire to kill you...yet. As a matter of fact, I’m going to give you what every man dreams of. His very own virgin to tutor.”

She released him again, giving his head an affectionate pat. “You do like women, don’t you?” she taunted. “I’ve heard several stories about Garinthian men, and I’m not certain which one to believe. Either you have trouble fucking women in general, or you prefer men.” Her smile widened until her teeth gleamed. “Either one works for me.”

Queen Vestna waved her hand at the women standing at his side. Red flames flickered around him, flashing pain through his body until he collapsed. “Take him to the basement and chain him to the wall. Mira’s Rite of Passage doesn’t begin for two more nights, and I want him on the verge of death when we take him to her.” She laughed. “A fitting gift.”

The Queen strutted back to her throne, her attention now focused on the two men kneeling beside her ornate chair. They were dressed in tight leather pants with matching, open vests. She smiled as they bowed before her and began untying her clothes.

“Oh, and sisters, make sure our guest knows what’s expected of him. I don’t want to risk losing our magic.”

The women nodded, dragging Keegan back through the doors. He watched as the men bared the Queen’s thighs, drawing her legs apart and exposing her sex to their gaze. They were just beginning to feast on her when the doors to the room closed behind him and he descended into the depths of the castle.

Healing Hands is the first book in the Enchanted Lovers series, and what a start it is! I devoured it—from page one to the end...This is my first book from Kris Norris, but it certainly won't be...

Healing Hands is one hot and spicy romance...I thoroughly enjoyed this Enchanted Lovers tale and think you will also.

Share what you thought about Healing Hands and earn reward points.