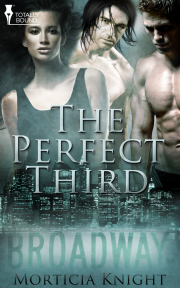 Alexa is young, sexy and single in New York. She's also alone. When she meets two hunky musicians, will they make her their perfect third?

Alexa is young, sexy and single in New York. She's also alone. But she doesn't want to date any more of the stuffy men she meets through her job at the law firm — she needs some excitement. When she meets hunky Lorne, a film score composer, at a premiere after-party, she can't believe her luck when he asks her out.

After an incredibly hot night of sex, when it seems that this is just the relationship she's been waiting for, things inexplicably cool down. Does his best friend and roommate, the dangerously handsome Antony, have anything to do with it?

One night the truth of Lorne and Antony's relationship is revealed to Alexa, and she has a difficult choice to make. Is she willing to just let go and become their perfect third?

Publisher's Note: This story has been previously released as part of the All Together Now anthology by Totally Bound Pubilshing.

Alexa Wharton unsnapped the front of her deep purple, lacy, push-up bra and let it fall to the floor. With the last bit of clothing off her body, she inspected herself in the full-length antique mirror in her bedroom. Her round, heavy breasts hung beautifully, her large pink nipples peaked from the slight chill in the room. As she continued looking down her body, she smiled in satisfaction at how her Pilates and yoga classes had helped to shape her torso into a lean, but still feminine form. Slightly curved hips, a flat tummy and a perky ass with long legs made her any man's dream.

Yet, she was alone. She pulled her long, brunette curls into a ponytail that fell to the middle of her back, and scrunched up her slightly upturned nose in the mirror. She was almost twenty-five years old, a quarter of a century. What a thought that was. It was getting scary to think that someone who was as sensual as she was could be this hopeless when it came to finding a deep love and real pleasure in her life.

Perhaps it was time to take the proverbial bull by the horns, or at least his horn as it were, and really make something happen. She had always been attractive enough that having to go after a man hadn't been a problem-many had approached her. The guys in her law firm in the financial district of downtown New York City never hesitated to come on to her. But she needed to remain professional, while having a social life. So she made do with meeting potential dates at attorney get-togethers where there were men from other firms. She wasn't much of a bar scene girl, and most of her friends were already in committed relationships.

Throwing on her cream silk robe, she went into the living room of her Soho apartment and opened her laptop. Internet sources might be a possibility. She wasn't quite ready for an e-date service, but maybe some ideas on the latest hot clubs, or she could look into joining a social group. This is pathetic. What sort of lame social group was she going to join? The same old business-minded, straight-laced men were not what she wanted. She had always fantasised about being with a wild and uninhibited male who would open up her mind and body to all manner of erotic thrills. She wanted a bawdy man with staying power. Someone creative and daring, who was ready to turn her on over and over again, all night long. I wouldn't say no to a huge dick either.

Just then her desk phone rang, and she jumped, abruptly torn from her sexual reverie. It was Jill, a very upwardly mobile colleague at her firm who loved to party, but could still negotiate the finer points of a business contract on only three hours of sleep. She was a tall and lanky temptress with a short, red bob who could literally charm the pants off any man.

"Hey, hot stuff," she cooed into the phone. "What are you doing at home at eight p.m. on a Saturday night, you naughty thing? Or should I say, you not very naughty thing?"

"Ha! I suppose I should ask you the same. You are the one calling me, after all, and I don't hear the customary laughter and clinking glasses in the background. Nor do I hear any dance beats, so you can't be at a club. Don't tell me you're losing your touch…"

"Now, now. Don't be cranky with me just because you haven't had a decent lay in ages. But I may just have the perfect solution for you."

This was quite a different little yummy read...There is quite a few hot sex scenes in this little novella.

Share what you thought about The Perfect Third and earn reward points.