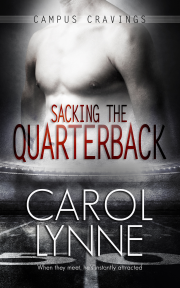 Book 3 in the Campus Cravings series

Koby is thrilled when his all-time favourite player agrees to help him. Not only can they work on Koby's upper body strength, but maybe on the growing attraction between them.

What Koby doesn't know is that a lifetime of abuse has left its mark on Julian. When shadows from the past threaten their growing relationship, Koby helps Julian fight back by getting him the help he so desperately needs.

But will therapy be enough when the past comes back to threaten Julian in person?

As he carried the bottle into the bedroom, he was sorry to see Koby was already asleep. He knew that sleep was needed, but Julian thought liquids were more important just then. Sitting on the edge of the bed, he ran his hand over Koby’s shiny gold hair. It was so soft. He longed to run his fingers through it. With a sigh, he spoke. “Koby? You need to wake up and drink something.”

“I know, but the doctor said you need to replenish your fluids. Come on, wake up and drink this bottle and I’ll let you sleep for a while.” He ran his hand over Koby’s chest and stomach. A fire lit in his groin as he felt the muscles ripple under his fingers. It must have had the same affect on Koby because he moaned even though his eyes were still closed. Startled, Julian took his hand away and put it on the bed.

Opening his eyes, Koby smiled. “If I drink, will you continue to rub my belly?” Julian looked at him for several moments. “I’m not sure you’re up to it.” He handed the bottle of blue sports drink to Koby.

Taking the bottle, Koby tried to sit up. Julian helped manoeuvre him until he was leaning against the headboard. Before Koby lifted the bottle to his mouth he took hold of Julian’s hand and brought it back to his chest. “Keep doing it, it makes me feel better.”

Against his better judgement, Julian rubbed circles over Koby’s flesh. He swallowed as he watched Koby’s nipples harden into tight nubs. His tongue tickled with the need to taste one of those hard peaks. He sure as hell didn’t understand what was coming over him. He’d never had these desires before. Fucking had been his only link to another individual. Right now though, he wanted to worship every inch of Koby’s tanned skin. He wanted to crawl under the covers and hold him in his arms, another first for him.

As Koby drank, he maintained eye contact with Julian. When the bottle was empty he reached over and set it on the table. Leaning forward, Koby did the unthinkable and kissed him.

Julian was shocked at the warm tongue probing his lips. Damn, he felt like a terrified virgin. He tentatively opened his mouth and let Koby inside. Julian was overwhelmed at the feelings one kiss could evoke. Koby moaned and put a hand to the back of Julian’s head, taking the kiss deeper. Too much, he was feeling too much emotion.

Breaking the kiss, Julian looked into the bluest eyes he’d ever seen. “Get some sleep. I’ll wake you in a couple of hours with another drink.” He quickly got off the bed and saw the hurt in Koby’s eyes. “I’m sorry, it’s just....” He left the room and walked straight to the deck.

Slumping into a chair, Julian closed his eyes and relived the kiss, his fingers automatically going to his swollen lips. He couldn’t believe at the age of twenty-four he’d finally been kissed with tenderness.

I can't get enough of this amazing author's work!

The third installment in this entertaining series. I love how each book has cameos of characters from previous books so we can keep in touch! Julian and Koby have a lovely relationship that is supportive...

Share what you thought about Sacking the Quarterback and earn reward points.