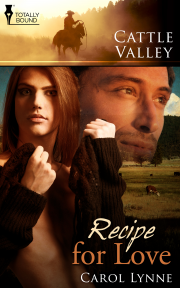 Book 15 in the Cattle Valley series

After years of living in fear, Jay De Luca has finally found a safe haven in Cattle Valley. Although he's beginning to open up around his friends, he's far from ready to get involved in another relationship. When handsome, Erico Morrelli tries to hire him away from a job he loves, Jay declines the restaurateur's offer, afraid of spending time with the town's playboy.

Ashamed to tell his friends he's sick, Erico tries to run The Canoe on his own despite protests from his physician. When he collapses at work, Erico begins to re-evaluate his future. His attraction to the one man he knows he should stay away from haunts him.

Can Erico invent a Recipe for Love or will he face his toughest challenge alone?

Erico set down his knife and braced his hands on his prep table. He closed his eyes and took slow, even breaths until the wave of dizziness passed. Opening his eyes, he glanced around to make sure no one had noticed the episode.

They were becoming more and more frequent. A continual reminder that he needed to find a qualified sous-chef quickly or be forced to shut down the restaurant he’d put his heart and soul into.

Turning his attention back to the radish-roses he’d been creating, his thoughts went to Jay. He knew the man had the skills to become a damn fine sous-chef, and more importantly, he trusted Jay to watch over The Canoe in his absence.

Mario’s warning to Jay to stay away from Erico had gutted him. When had he become the kind of person people were warned away from? He finished off the garnishes and put them in an airtight container before slipping them in the cooler.

A large part of him was happy there was a fucked up blizzard raging outside. At least it meant he could work as slow as he needed to. With only a few customers braving the cold and blowing snow, Erico had managed to keep up quite nicely.

With the majority of prep work completed, he cleaned his work area and washed his hands before wandering into the bar area. He sat on his usual stool at the end of the bar. “Would you mind making me a glass of ice water, Troy?”

“Sure thing.” Troy rose from the stool he’d been resting on behind the bar and made Erico his drink. “I hope it picks up. I’m bored out of my skull.”

Normally Erico would have suggested Troy start cleaning, but from the shine to the glasses hanging over the bar, he’d already done it. “Anything good on TV?”

Troy shook his head. “Reruns. That’s all that’s on between Christmas and New Year.” Troy grinned. “Unless you wanna watch one of those Christmas cartoons. I’m sure I can find one.”

“I’ll pass.” Erico took a big gulp of his water. A glance at the clock proved just how long a day it had been. Although it felt like it should be near quitting time, it wasn’t even six o’clock. “Have you caught a recent weather report?”

“This is it for the next three days. Snow, snow and more snow. Next week we’re supposed to warm up fifteen degrees. Does that help?”

Erico thrummed his fingers on the bar. “Maybe we should go on home. Guess I should’ve shut down like everyone else in town.”

Erico took another look around the empty restaurant. “Before you leave, go tell Ellen and Chip to call it a night. I’m going to start closing up the kitchen.”

“You want us to stick around until you’re done?” Troy asked.

“No need. I’ll probably just sleep on the foldout couch in my office.” It was something he usually did when the weather was bad. His house wasn’t far away, but Erico liked to be close enough to switch on the generators if there was a power failure.

Erico reached for the remote and turned off the TV. “Give me a call before you come in tomorrow. If the weather keeps up, no sense in coming in. If we do happen to get a customer, I can tend the bar.”

Troy pulled on his big down parka. “Thanks. Have a good one.”

Erico headed to the kitchen. There wasn’t much to do but turn the pots of soup off. He’d need to put them in the cooler, but he’d do that before bed. After a last check of the kitchen, he turned the main light off and headed to the front to lock up.

At the front door, he reached for the deadbolt when movement outside caught his attention. He saw a woman hurrying across the street towards the restaurant. “Damn.”

The bundled shape stepped onto the sidewalk. Erico was prepared to open the door and welcome the customer when the woman’s feet flew out from under her. As if in slow motion, the customer fell backward, striking her head on the sidewalk.

Erico flung open the door and raced as fast as he dared down the steps. He heard a moan as he knelt beside the downed woman. “Are you okay?”

The injured woman reached up and pulled the scarf away from her face. “I’m okay, I think.”

Erico was shocked to see Jay’s beautiful face staring up at him. “Can you stand?”

Jay nodded, and Erico helped him to his feet.

“Let’s get you inside where it’s warm.” Erico wrapped an arm around Jay’s tiny waist and helped him up the steps.

Erico felt incredibly guilty. He knew if he were in the city, he’d be sued for everything he had over such an accident. Although they’d taken turns throughout the day clearing the steps and sidewalk, it was almost impossible to keep up with the blowing snow.

After shutting the door behind them, Erico led Jay to one of the padded benches in the waiting area.

Jay sat and started shedding his winter clothing. “I think I’m going to have a nice bump on my head, but nothing too serious.”

Erico took a seat beside Jay. “You mind if I take a look?”

Jay pulled his hat off and shook his head. Erico stared at the shiny brown hair. How many times had he longed to run his fingers through the long, silky locks? He reached out and felt the back of Jay’s head. It didn’t take long to feel the goose egg.

“You’ve got a pretty nasty bump. Would you like me to call the paramedics?”

Jay reached up, and his long, thin fingers brushed across Erico’s. “Here?”

Erico moved his hand and placed Jay’s over the injury. “Feel it?”

“Would you like me to call someone?” Erico asked again.

“No. I’ll be fine.” Jay’s hands moved down to his waist. He twisted his torso several times.

“Did you hurt your back, too?” Erico asked. He knew it was wrong, but he couldn’t help but cringe at what a back injury would mean to his insurance premiums.

Jay’s hands gently began probing his lower back. “I think I just scraped it on the pavement.”

With his worries over an insurance claim put at ease, the guilt began to sink. What the hell kind of person am I? Erico fisted his hands in an attempt to get himself under control.

“No. Oh, God, no. I’m not going to hurt you.” Mario’s warning came back to Erico loud and clear. Completely disgusted with himself, Erico balanced his elbows on his knees and covered his face with his hands. “I’m sorry. I was mad at myself, not you.”

Carol is the best writer of all time. Jay and Erico was one of the sweetest couples I have ever read. There were no two people that would have fit together better. I can not wait for Ethan's story....

Carol Lynne does it again with a beautiful, touching yet hot story. So happy Jay is finally getting his story. Enjoyed immensely!

Share what you thought about Recipe for Love and earn reward points.