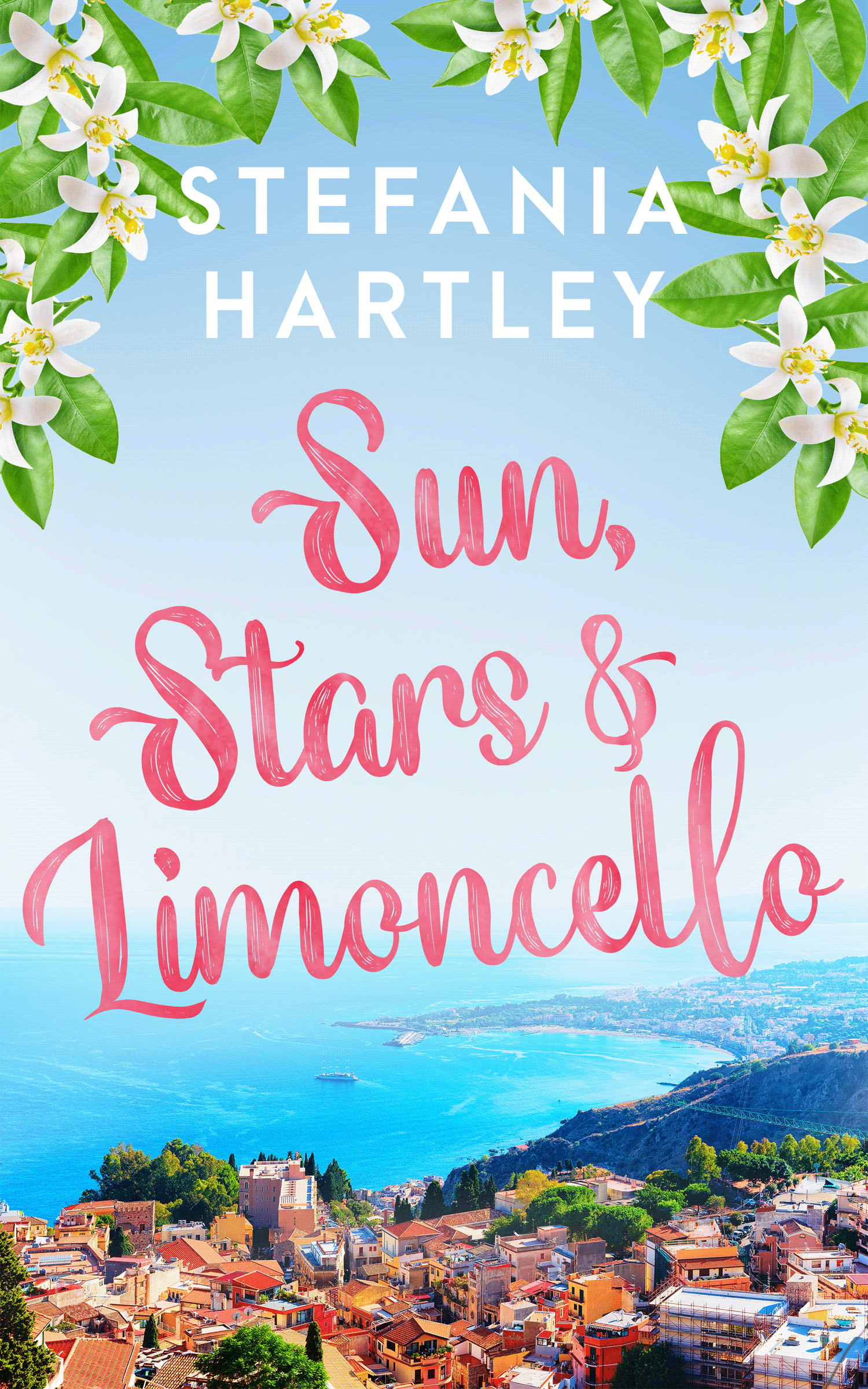 Sonia believes that men equal heartache and disaster. Brad has sworn never to love a woman again. It’s a pity they’re so irresistibly attracted to one another.

After her traumatic teenage years, Sonia’s teaching job would be the best thing that has happened to her if it weren’t for Brad Wilson. Her arrogant, standoffish colleague never fails to rub her the wrong way. But when she’s faced with the choice between canceling the school trip to Sicily or accepting his ungraceful help, she swallows her pride and resigns herself to spending an entire week in close quarters with him. Little does she know just how close.

A tragedy from his past still haunts Brad, and he’s sworn never to let his heart be shredded by grief again. Loving another woman is not in the cards. That’s why his petite olive-skinned colleague is so very dangerous.

What could possibly go wrong when their mutual destination is one of the most romantic places in the world?

Sonia felt like she’d sped straight into a wall, even though the broken leg wasn’t hers. Kate would not be coming on the trip. The staffroom was plunged into silence as the other teachers pondered the impact that their colleague’s sick leave would have on them.

“Then there’s the Sicily school trip to cover,” Mrs. Ashcroft continued, “because even though we all know that Sonia would happily take twenty-eight Year Sevens to Sicily all by herself…”

Yes, she wouldn’t think twice about taking the kids on the trip on her own. She’d do anything for them. She curled her fingers tighter around her mug.

“It wouldn’t be legal. Our school cook and his wife are going with her, but we need another teacher. Unless, Sonia, you wish to cancel the trip?” Mrs. Ashcroft turned to her and all her colleagues’ eyes swiveled in her direction.

Cancel the trip? After her students had worked incredibly hard on their Italian, baked and sold cakes and washed cars to raise money? She had fought tooth and nail for the grants that would allow even the less-well-off to come. Then there was Charlotte Rogers, who had fixed her with her big, sad eyes and thanked her for this trip, because it would give her respite from her warring parents. No, I can’t cancel it! She wouldn’t, even if she had to pay someone to go with her. “Absolutely not,” she answered resolutely.

“Then we need a volunteer to go with Sonia,” Mrs. Ashcroft confirmed, scanning the staffroom. Bums shifted on chairs, hands crept to watches and the wind whistled outside the windows. All eyes were pinned to the floor except one green pair. Even though she didn’t dare look in that direction, Sonia felt them on her.

“The kids going are a lovely bunch of Year Sevens,” Sonia said, trying in vain to make eye contact with her other colleagues, “and Sicily is very beautiful in April—not too cold, not too hot.”

Eventually, Rachel looked up. “I’m sorry, Sonia. I’d love to come, but I haven’t got anyone to look after my kids.”

Mildred explained that her knees were giving her trouble and she couldn’t walk far. Alistair had just had his first baby. Grumpy old John muttered some excuse. Anyway, Sonia knew that he wouldn’t give the school a minute more than his contracted time. Chantelle had already booked her Eurostar ticket home, and Sonia delicately avoided sending a glance in Bernie’s direction. During the holidays, she’d be going for another IVF attempt. One after the other, all the remaining teachers declined the invitation. When even the head felt the need to excuse herself—a crucial meeting with the school governors—Sonia felt her last drop of hope drip away.

The only member of staff left was the owner of the jade eyes that had followed her from the beginning of the staff briefing, but Sonia avoided looking anywhere near that direction. She had absolutely no wish to travel with him, and she was utterly confident that her feelings were fully reciprocated. Brad Wilson had gotten under her skin like a freezing cold shower from the day he had started at the school. He seemed to have no normal, friendly way to look at her. He either averted his gaze or pinned her with one of his icy stares—unsmiling, as if he were about to dish her a detention. The first few times, she had checked her reflection in a window. Was her décolleté too low? Her skirt too short? Eventually, she had concluded that he was just a miserable wet blanket.

She could put up with Brad Wilson in other circumstances but not on this trip. She had cajoled the newlywed cook, Jake, to come along with his wife, only under the promise that it would be as close to the honeymoon they hadn’t been able to afford as she could make it. When Kate had been going with her, Sonia hadn’t minded the idea of giving the couple space, provided they were available in the event of an emergency. But if Brad took Kate’s place, the setup would be much too much like a double date. The idea was totally cringeworthy, especially as there wasn’t a single female member of staff who wouldn’t swoon over Brad Wilson.

Not that she was in any way attracted to him. No way. She was done with men. Made the mistake, got the T-shirt, learned the lesson. But being pushed together with the staff’s heartthrob would be uncomfortable, if not utterly unpleasant.

Sonia felt his brooding presence and, out of the corners of her eyes, she could make out his tall figure leaned against the door jamb, detached from the rest of the staff, his mug in one hand, laptop carelessly held under his other arm. She kept her gaze trained on the ground, but she could feel his gaze needling her. Do not make eye contact. Do not look at him or at anything near him. If she could have made a sign flash on her forehead with the words Brad Wilson need not apply, she would have.

“How about you, Brad? Could you go with Sonia?”

Mrs. Ashcroft’s words made time slow down and blur like a bullet in the movies, only there was no way Sonia could dodge this bullet if he said yes.

Please, say no. You must have a holiday booked, a girlfriend waiting or a wife and children at home. Please, be busy.

He clutched the mug to his chest like it was a miniature shield and contorted his face into a pained frown.

Please, say no. Make up an excuse.

“I suppose I should.” He sighed.

A flood of angry adrenaline restarted Sonia’s internal time at a galloping trot. That was the unkindest acceptance he could have ever conjured up. ‘I suppose I should.’ Was there a more convincing way to make it clear beyond a doubt that they were twisting his oh-so-handsome-and-muscly arm? He was going to oblige, but only out of duty, and he would do it with as little grace as possible—and even less enthusiasm.

Before Sonia had a chance to refuse his ‘offer’, Mrs. Ashcroft replied hastily, “Thank you, Brad. That’s very kind of you.”

’Kind’ was the last word Sonia would have used to describe Brad Wilson.

Stefania Hartley, also known as The Sicilian Mama, was born in Sicily and immediately started growing, but not very much. She left her sunny island after falling head over heels in love with an Englishman, and she’s lived all over the world with him and their three children.

Having finally learnt English, she enjoyed it so much that she started writing stories and nobody has been able to stop her since. She loves to write about hot and sunny places like her native Sicily, and she especially likes it when people fall in love.

Her short stories have been longlisted, commended and won prizes. Plenty of Fish in the Sicilian Sea is her second novel, after Sun, Stars and Limoncello.

You can find out more about Stefania on her website, and on the Sicilian Mama's Blog. You can also listen to Stefania's podcast.

Share what you thought about Sun, Stars and Limoncello PRINT and earn reward points.