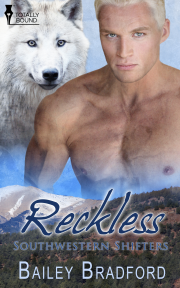 Book 3 in the Southwestern Shifters series

Six months in his enemies hands has left Marcus Criswell a shell of the man he used to be—or so he thought until his destined mate rescued him from a cruel death.

Six months have passed since Marcus Criswell, Alpha Anax of the North American shifters, disappeared. Held captive, tortured and driven to the brink of madness, he still refuses to give up. Even when his captors abandon him, leaving him chained without food or water, Marcus will not accept his fate.

Until his fate changes with the appearance of his mate, Nathan Grant. Now if only the two of them can survive long enough to enjoy it.

Nathan Grant doesn't know the first thing about shifters other than he is one and should avoid all others. He's followed that advice all of his life. Raised by humans, Nathan is more than a little uncomfortable with the idea of being around any other shifters. One spontaneous day spent running as his wolf in Lincoln National Forest forces Nathan to reconsider what little he thought he knew, and to risk his life for one very unforgettable man.

Surviving isn't easy, and Marcus is all too aware he's only a shell of the man he used to be. He wasn't broken completely, but he's definitely fractured, and even finding his mate might not be enough to help him heal.

Nathan bounded out of the cabin in human form, barely able to wait until the dense pines closed in around him. He began stripping in the cover of those magnificent trees, and filled his lungs with the scent of the forest, the pungent, earthy essence of this part of New Mexico he loved so much. It was as integral a part of him as the blood that coursed through his veins.

Within seconds, Nathan was nude. He hid his clothes under a thicket, setting his shoes on top of them in hopes the weight would hold them down should the wind kick up. Then he shifted, his body contorting, bones and muscles, tendons and flesh rippling, freeing his other part. His paws clenched, his toes digging into the soft ground. The fur on his paws looked darker than the fur further up his legs, but distinguishing the exact colour was impossible while in wolf form. He could make out a slight variation in shading, but where else exactly that was so on his body, Nathan hadn’t any idea.

It wasn’t as if he’d ever had a photo taken of himself like this so he could look at it when he shifted back. Maybe if he’d had a pack to run with, someone would have told him what he looked like. But he didn’t want a pack, didn’t want to have anything to do with other shifters. They were cruel, dangerous creatures. That was all he knew of them, and it was more than enough.

Besides, it didn’t matter what he looked like, it was time to run. Nathan took off, letting his long legs carry him wherever his nose guided. There were so many scents he could detect when he was in his human form, having a shifter’s heightened senses. But when he finally got to let his wolf out, every particle of air seemed to carry its own unique smell, and Nathan often found himself exhausted and miles from his clothes by the time the exhilaration of chasing the enticing odours had worn off.

That was the usual pattern, and this time when he finally grew too tired to run farther, Nathan wasn’t surprised to find himself deep in Lincoln. The national park was over a million acres in size, and as worn out as he was when he finally stopped, Nathan figured he might have loped through more of those acres than he should have. He didn’t even have the energy left to chase after a rabbit, at least not right then.

Chastising himself for being reckless once again, Nathan slunk towards the stream, his nose and ears easily leading him to the welcome water. Dusk was settling over the forest. As the evening darkened, Nathan’s vision would sharpen. There was no point in him shifting back to human form, not when he was going to be stuck out here for the night. He’d need his fur to keep him warm, and, anyway, a wolf was more intimidating than a man to the other creatures lurking about.

As Nathan neared the stream, a spike of heat chased by a fur-ruffling chill skittered down his spine. Hackles raised, he laid his ears back and dropped down low, looking for the source of his sudden unease. Once he realised what it was, Nathan mentally cursed himself over and over. How could he have been so careless? All his life, he’d been so careful to avoid other shifters, unwilling to risk losing Rick, and yet here Nathan was, and his senses were telling him he hadn’t just discovered one of them, but what might well be an entire pack across the stream. They were upwind of him, but that didn’t mean Nathan was safe, not at all.

A wolf’s pack land could extend over a hundred miles, and they were definitely territorial. He didn’t know much about other shifters, but Nathan had no reason to believe they’d be any less aggressive than regular wolves. It was a no-brainer that Nathan, less than a hundred yards from the source of the scents he was picking up, was assuredly somewhere he shouldn’t be. He tried to calculate how far he was from the cabin, but, with all the winding paths he’d taken, and the numerous tantalising scents he’d sniffed out off-path, he figured he could be anywhere from ten to thirty miles from where he’d started.

Easing away from the direction he’d been heading in, Nathan tipped his muzzle up, carefully checking for immediate danger. A gust of wind whipped over him, and he froze in his tracks as a fiery bolt of desire speared through him. Nathan had never found himself aroused while in his wolf form before, and he wasn’t happy to experience the sudden and intense burst of hormones, pheromones, whatever it was that he was swamped in now. He didn’t care what it was—he just wanted it to stop, because, in the split second when the wind rushed over him, his wolf and his man came to a glaring difference of opinions.

His wolf said, ‘We’re staying, there’s no other choice.’ The man in him thought the wolf was fucking nuts. If they—he—didn’t get out of here now, chances were better than good that the shifters upwind would find him. And even with the overpowering, alluring aroma that had lit up Nathan’s body like a supernova to the nth degree, Nathan hadn’t missed the other odours. If evil had a smell, it was right there as well, permeating each breath he took.

Nathan didn’t want anything to do with shifters, period, and certainly not with ones he was positive were exactly like his father. The part of him that was wolf may have yearned for a pack, to run with others of his kind, but Nathan would be damned before he let that side of himself make such a foolish decision. He forced himself to back away, suppressing the urge to snarl as his wolf clamoured and railed against leaving.

Then he heard it—or, more precisely, him. The wind seemed to amplify the agony in the man’s scream. Nathan’s heart gave one hammering beat then another as he smelt, heard, almost felt the tortured man’s pain. His sympathetic whimper was torn from him as he dropped to his belly, his front paws curling and digging into the moist earth.

Marcus isn't carefull when he needs to be and is taken captive. At the edge of giving up and accepting death he is unexpectedly saved by his mate. Love the courage and strength to overcome that is described...

The third book in the Southwestern Shifters series is a riveting and emotionally gripping romance.

The author has created a fantastic world of shifters with lo...

Share what you thought about Reckless and earn reward points.