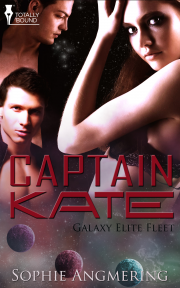 Captain Kate Thorn makes a habit of bending the rules to suit her purposes, but then she meets two men who simply break them to get what they want.

Captain Katherine Thorn has one of the toughest reputations in the Galaxy Elite Fleet. Her problems start when she mistakes two powerful diplomats for Rim pirates, and attempts to ensure their silence regarding their rescue by using sexual blackmail. But Kate has never come across anyone like these two men before, two men who are prepared to use every method at their disposal to ensure payback, and they want to get her back in their power and in their bed.

Dominic Danyeo braced himself against another barrage of fire from the Galaxy Elite Fleet ship. Whump. Whump. Whump. A volley of shots broadsided them as they sat virtually immobile, trapped against the side of a small moon.

“All of it?” Rennick Stannick was always remarkably calm under pressure.

“No politically sensitive data is to get into fleet hands.” Danyeo rubbed his face, clearly exhausted from seventy-two hours of fighting, “The government of Prime 7 will have to wait. Delete all of it.”

“I always said this was going to be a risky trip.”

“Wiped.” Rennick grabbed for the edge of the flight desk as another barrage of fire hit.

“Good. Smarten up, Stannick, time to abandon ship. Make sure the collective know we need picking up. I don’t want to spend any more time than absolutely necessary in the company of the GEF and remember this was supposed to be a covert operation.”

“The ship is secured, Captain. Commander Lomax is escorting all personnel on board.”

Kate could not help the slight smile of triumph as she surveyed the crippled Rim Class ship from the controls of her craft. They had been fighting for almost three days straight, and when all had seemed lost, she had made a last audacious bid to outmanoeuvre her opponents. Her daring attack had trapped the privateers within the orbit of a remote rock mass.

The crew had surrendered without a fight, their ship a mess.

“Captain Thorn…I would have a word with you in private.” Lieutenant Clarke appeared at her elbow before even a minute of her victory had passed. Her third in command was ambitious and lacked

Kate’s family connections. It made him an unreliable and resentful subordinate that was better handled promptly and publicly.

“Problem, Clarke?” Kate replied curtly. As one of the youngest, toughest Captains of the Inner Galaxies Elite Fleet, she stuck doggedly to a code of cool professionalism. She kept her distance and maintained an expectation of unquestioning respect from her crew.

“You should have not have engaged the Rim pirate ship. It would have been enough to have driven them out of the border zone, away from GEF space.”

“Are you questioning my judgement, Lieutenant Clarke?” Again, rang through Kate’s head but thankfully never made it to her lips. Clarke was becoming more than just annoying. He was becoming a liability. “The rules are quite clear. We are not to waste time on Rim dogs and pirates,” Clarke insisted. “The GEF directives in this situation clearly state that firepower is to be saved for direct engagement with Rim insurgents.”

Kate resisted the urge to roll her eyes. Clarke lived by the damned rulebook.

“This particular craft was well inside the boundaries of the ISS Star’s jurisdiction.” But it had been quick enough to dodge out of their legal engagement area when it became obvious that Kate’s ship was prepared to attempt to capture a privateer ship. “They were blatantly entering GEF protected territories. You do not have to explain Galaxy Elite Fleet rules to me, Clarke, I was brought up on them,” Kate replied, ruthlessly using an oblique reference to her influential family to silence him. “I am going down to inspect our prisoners. Keep your full attention on the salvage dogs that have been circling since our engagement with the privateer vessel. The rulebook is quite clear about the responsibilities of being on watch.”

...unexpected twists and turns...they find each other and a happily-ever-after.

Share what you thought about Captain Kate and earn reward points.

Other books in the Galaxy Elite Fleet seriesView Series Page