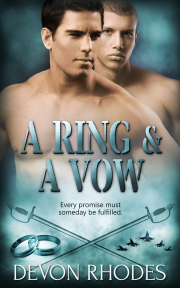 A Ring and a Vow

Every promise must someday be fulfilled, and the best way Owen knows how to reward Cary’s faith is with a vow.

It’s been nearly five years since Owen went down on one knee with his Academy ring and promised Cary he’d someday do it for real. With Cary being a Naval aviator and Owen a Marine officer serving in Iraq, they’re rarely on the same continent, let alone together.

About time for them to fill out paperwork to re-up, Owen realizes that if they were married, they’d have a much better chance of being stationed nearby. But time is not on their side, so he’s forced to compromise on his proposal in order to make it work.

Cary has been waiting for Owen for years—there was no chance he’d ever say anything but yes. Owen is coming home at last, and wants to make a home with him. However, between the chronic nightmares he’s been fighting and the ever more complicated wedding plans, the next month could be anything but a dream.

Reader Advisory: This book is the sequel to A Ring and A Promise by Devon Rhodes.

Publisher's Note: This story has been previously released as part of the Semper Fidelis anthology by Totally Bound Publishing.

“What?” Cary went breathless with shock as the words hit him like a blow. For a moment, he thought he might throw up.

“My ring.” Owen’s expression was as determined as Cary had ever seen it.

Cary pressed his lips together and swallowed as he processed what was happening. He had always feared that Owen would find their situation too hard—two servicemen in different branches, and soon different countries, for years to come. Cary inhaled deeply then blew out an exhale and nodded. He knew that this had to be almost as hard for Owen as it was for him, no matter how crushed Cary was at the moment. Maybe even more difficult, since Owen wasn’t one to express his feelings.

His heart breaking, Cary fumbled at the ring on his finger. It clung to him as though it was as reluctant to leave him as he was for it to be gone. Though it wasn’t the least bit tight, he couldn’t seem to get a good grip on it. Finally, he managed to pull it down his finger, held it for a moment then forced himself to place it in Owen’s hand.

Cary kept his eyes directed downward. Somehow if he didn’t see this happening, it would be less real. His eyes slid shut and he heard the echoing of the words that had shattered his heart and dreams—“I just can’t do this…”

“I can’t leave you without doing this the right way…the way I should have done it to begin with.”

Cary’s eyes popped back open. Owen’s voice had come from lower than…

His breath caught at the sight of Owen down on one knee before him, holding the ring in his fingers.

No. No, no, no. It isn’t what you’re thinking. He…must’ve dropped the ring. Yes, and knelt down to pick it up…

He felt the ever-present optimistic side of him shoving that nay-sayer aside as he took in the sincere and worried expression on Owen’s face. Cary automatically reached out to Owen, who took both his hands in one of his, still holding the Naval Academy ring in the other—the ring he’d secretly swapped for his own before they’d parted just after graduation. The ring that Owen had told him to go ahead and keep in a deliberately off-handed way when the impulsive deception had finally been discovered.

Oh my God, this is really happening.

Cary wanted to fall to his knees but he couldn’t move—it was like his joints were set in concrete. The harder he tried, the more frustrated he became. Finally able to move one arm, he pulled a hand free from Owen’s to run along his cheek while he encouraged him to continue with his eyes.

“You’ve been right all along. And you’re right in what you said just now. There’s no reason we can’t make this work. I can’t imagine ever loving anyone the way I love you. And if you’re willing to wait for me…until we can be together for real…” Owen dropped his gaze and stopped talking for a moment as he slid the ring back onto Cary’s finger. “Someday, I’ll do this again, and it’ll be a different ring,” he vowed in a deep voice. He still wouldn’t look up.

Cary cupped his chin, needing to see. At last Owen lifted his head.

Cary reeled back in horror. Instead of the warm brown gaze he loved, there were gaping holes where Owen’s eyes should be.

“Incoming!” The shout came from nowhere, and now they weren’t in the foyer of Cary’s mom’s house, but in the desert.

A huge explosion rocked the ground and a crater formed just yards away.

Owen shook his head and looked down again.

“No!” Cary screamed when he saw that Owen wasn’t kneeling, but legless…

Ms. Rhodes gave both men life in her characterization of their personal struggles in an institution where DADT was a guiding force for the gay military couple of A Ring & A Promise—to the repeal...

I had a blast reading this and look forward to hearing more about their lives together. It was a perfect love story for two gorgeous men in uniforms. I would d...

Share what you thought about A Ring and a Vow and earn reward points.