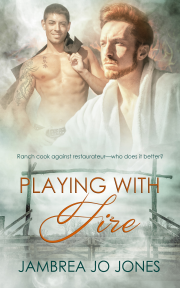 Ranch cook against restaurateur—who does it better?

Hayden McGrath has the formal training and knowhow to run one of the best farm-to-table restaurants in the city. This year he wants to prove his worth by entering the barbecue competition at the American Royal. It has nothing to do with a certain cowboy from the Flying P…

Amos Vasquez has been the ranch cook at the Flying P Retreat since it was an actual ranch. Now it’s a place tourists flock to so they can have a taste of his food. This year he is going to win the barbecue competition and nothing will stand in his way, not even a certain sexy redheaded restaurant owner who has caught his eye.

This will be the barbecue competition to beat all competitions at the American Royal.

Publisher's Note: This book has previously been released as part of the Unconventional in Kansas City anthology with Pride Publishing.

“Fuck! You tell his server we’re out of barbecue.” Hayden McGrath pointed at Sheldon, his manager.

“What?” Sheldon seemed confused and Hayden didn’t blame him.

“He isn’t getting any hints as to what I’m going to be doing at the American Royal.” Hayden got out of his chair and headed to the kitchen. He needed out of the office anyway—paperwork was driving him nuts…not like he had a long way to go, as he was proving with the conversation.

“You can’t be serious. He’s eaten here before. He had your barbecue just last week.”

Hayden knew Sheldon was trying to calm him down, but it wasn’t working because the crazy train was leaving the station.

“Not the new one we’re trying out tonight.” Hayden crossed his arms over his chest.

“Hayden, the team is ready. We’ve got this. There is no need to get all…insane.” Sheldon threw his hands in the air.

It was too late. Hayden rushed out of the kitchen so he could spot where Amos had been seated. And there he was, talking to a group of guys as if he didn’t have a care in the world. Damn it, why did he have to look so good? He was tall, dark and handsome with the dark scruff around his face that had scratched when they’d kissed. The tattoo on his forearm was on display. The rest of his tats were hidden where, once upon a time, Hayden had had full access and used it to his advantage. Amos had his flannel shirt rolled up to his elbows, as was his usual style—something Hayden shouldn’t have even noticed. He was over the cowboy. Totally over him.

He has such nice strong hands.

But enough of that. The cowboy was probably sleeping with one of those twinks at the table. It was infuriating to see the man looking so happy. He should be sad, pining for what he could never have again.

Hayden moved through the restaurant, nodding to the few regulars until he reached the table, letting his anger burn through his system. Why did the jerk have to keep coming into his restaurant and rubbing it in his face that Amos was over him? Not that they’d really had a thing. It had been one night.

One that Hayden kept dreaming about. Repeatedly.

“Don’t you have somewhere else to be?”

“Well, hello to you, too, Hayden. I didn’t expect you to personally take our order. I’ll have some barbecued pulled pork.”

“No. You won’t. We’re out.” Hayden crossed his arms over his chest. Was denying Amos his barbecue petty? Yes, but he didn’t have any fucks left to give.

“Somehow I find that hard to believe, Hay.” Amos smirked at him.

“You don’t get to call me that, Amos.” Hayden pointed at Amos. He was doing too much of that this evening. He holstered his finger and glared instead. He knew his face had to be flushed—the curse of being a redhead.

Amos sat back in his chair. “Is that why you’re entering the open contest this year at the American Royal. Something to prove?”

Did Amos look sad? No. Hayden couldn’t think about that. They were over before they’d ever begun. He wasn’t going to be another notch on the rancher’s bedpost. Well, technically, he was a notch, but Hayden wasn’t going to let his heart go to a player.

“I don’t have anything to prove to anyone.” Hayden was firm in the belief that he should share his skills with the world, or at least those attending the American Royal.

“Then what’s the big deal about serving me some barbecue?”

“I’m not giving you an unfair advantage.” Hayden huffed.

“I thought you knew me better than that, Hayden. I’m not going to steal your recipe. It’s been a long day. I’m hungry. I don’t want any of your other fare. I enjoy your barbecue. But whatever. I’ll take what’s on special if it’s going to be that big of a deal.” Amos sighed.

Hayden hated that he sounded like a brat. He was a classically trained chef who owned his own restaurant. Someone listening to him now would never believe it.

“I’ll send your waiter over. Excuse me.”

Hayden headed back to the kitchen, Sheldon trailing behind him. He’d almost forgotten his manager had followed him out of the kitchen.

“What was all that about, Hayden?”

“I don’t fucking know. I should know better. He just gets under my skin.” Hayden headed back to his office. He didn’t work the line anymore—that’s what his head chef was for. As a matter of fact, he didn’t do a lot of cooking at all anymore and it was one of the things bugging him lately.

“Maybe you need to get laid.”

“You know, you’re one of the only people who can get away with saying things like that. And I don’t need to get laid. I need to cook. This weekend can’t come fast enough.”

“We both know the reason you entered was because you want to beat Amos. He’s placed the last couple years.”

“Well, this year, I’m placing better than him. I plan to win this thing. He’s never done that.” Hayden threw himself into the chair.

“Damn it. I know, I sound like a moody teen. I’ve been in a funk for months.”

“Don’t finish that sentence, Sheldon. Maybe I can open another restaurant. Do some more hands-on stuff, hire someone for the paperwork. It has nothing to do with that man. Nothing.”

“There’s nothing to fix. I’m going to win that competition and things will be better.” Hayden fully believed his delusion of things being better, unless he was sleeping and dreaming of Amos, but he was done with that. He was going to win the American Royal and send that cowboy back to his ranch with his tail between his legs.

Share what you thought about Playing with Fire and earn reward points.