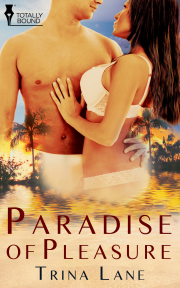 Elaina Roman is at a crossroad. She's split with her boyfriend after his refusal to try something new in the bedroom. For some time Elaina has wondered if there could be more to sex than pleasantness. She thinks she's found the answer, but where's a girl to find the experience?

When a week of exploration and discovery turns into love the pair must make a choice. To stay and experience a lifetime of pleasure in paradise return to their former existences.

Publisher's Note: This story has been previously released as part of the Master Me anthology by Totally Bound Publishing.

“You want me to do what?” Mike Wright exclaimed.

Elaina Roman lifted her chin, and looked straight into the shocked, pale blue eyes of the slack-jawed man across from her. “I want you to tie me up.”

“Why on earth would you want something like that? It’s silly and theatrical. What we have is more important than games in bed. At least I thought so.”

“What we do is fine, but haven’t you ever wondered if it could be more? We’ve been dating for six months, and I can count the number of orgasms I’ve had on one hand.”

Elaina watched her current boyfriend’s—or imminent ex-boyfriend by the way things were looking—face go pale. His eyes darkened in embarrassment or maybe anger. She still couldn’t read his expressions very well because they surfaced so infrequently.

“So if you’ve had so few orgasms, what’s with all the moaning and gasping when we’re in bed? Are you telling me you’ve been faking this whole time?”

“It’s not that I fake enjoying sex with you. I do enjoy it. You make me feel good. I just rarely ‘get there.’ Maybe it’s my fault. Maybe there’s something wrong with me. It’s…”

“I was reading this book the other day about female sexual fantasies. In it the woman was describing being tied up by her lover. Being controlled, not by force but quiet authoritative command, and I...god, Mike, it made me so hot I nearly had to run to the ladies’ room in the lounge. I figured if reading about it got me so turned on, maybe experiencing it would be even better. I want to experience that with you.” Elaina looked down at floor in her Miami Beach condo. The cool travertine tile beneath her bare feet did nothing to dispel the heat in her cheeks.

She met Mike’s iceberg eyes, their placid colour a far cry from the vibrant azure of the ocean outside her balcony. There was no need for more words. She knew his answer. She knew that her risky venture hadn’t paid off. Not only had she lost the opportunity to explore her fantasies but also the companionship of a good man, colleague and lover.

She nodded her head. An errant tear tracked down her face. Mike closed the distance between them and gathered her in his arms. She nuzzled against the side of his face. She regretted the loss, but knew deep inside what they shared wouldn’t be enough in the long run. They wouldn’t survive if this part of their relationship was faulty. Sex wasn’t everything between a couple, but a lack of satisfaction in the relationship was a kill-shot to long-term happiness.

“I never meant to hurt you,” she whispered.

I really liked this tale of discovery...I was introduced to something new...I love books that inspire personal research!

Share what you thought about Paradise of Pleasure and earn reward points.