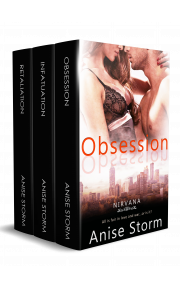 The ultimate bachelor meets his match when he sets out to seduce his secretary. What starts off as fantasy soon becomes an obsession.

Thaddeus Remington has everything he has ever wanted—a successful business, wealth and the ultimate bachelor lifestyle—until he meets his new secretary, Hannah Brinkley. Immediately he is intrigued and drawn to her, unaware of the side she keeps hidden until he sees her one evening at a local Atlanta kink club. Intending to turn his fantasies into reality, he sets out to seduce her.

Hannah Brinkley, a transplant from Texas, is unable to resist the lure of once again finding pleasure at the hands of a Dominant and becomes a member at a local club. Once there, she realizes that the man who flirts incessantly with her throughout the day is actually in a position to back up each and every naughty suggestion.

Physical attraction soon leads to a full-blown obsession that leaves them not only questioning each other but also searching their own hearts. Will the answers revealed bring them closer to experiencing nirvana in each other’s arms or tear them apart for good?

Fate gives Hannah Brinkley a second chance with her one-time infatuation until the secret she harbors threatens to tear it all apart.

Fleeing the arms of one dynamic corporate tycoon, Hannah Brinkley crosses the Atlantic into the arms of another, who is equally as dangerous to her heart as Thaddeus Remington. Unlike the man she left behind in Atlanta, Hannah shares history with Finley Wetherall and those old feelings for him return once again.

Successful, powerful and hung up on the girl that got away, Finley is determined to fight for Hannah’s heart and do whatever is necessary to keep her. Years before, he was hesitant to make his move for fear that she couldn’t handle his dark desires, but when she turns up on his doorstep, it has to be Fate. He will allow nothing and no one to stand between Hannah and their destiny.

He soon finds out that he isn’t the only one harboring secrets. Will Finley be able to break down the walls Hannah has built around herself, or will she instead allow the ghosts of her past to destroy what they’re currently building?

Secrets are exposed when two business rivals discover they have fallen for the same woman. All’s fair in love and war…or is it?

When past and present collide, Hannah Brinkley is torn in two romantic directions. By the time she realizes she isn’t the only thing at the center of the power struggle between two Dominants, accusations of corporate espionage threaten to rip her world apart. The possibility of prosecution is nothing compared to the realization that she’s lost the two loves of her life. Grappling with the emotional pain, she has nothing left to lose and sets out to clear both her name and her conscience.

Stung by a woman’s alleged betrayal, Finley Wetherall and Thaddeus Remington are determined to destroy one another, until they discover Hannah has put herself in grave danger. Now the two Dominants are in a race against time to determine whether they can actually put their own differences aside long enough to save her. If she’s rescued, will either man be able to walk away from her again? And, if not, will she be able to choose one over the other?

Tapping his pen against the top of his mahogany desktop, Thaddeus Remington couldn’t take his eyes off of the woman at the desk right outside his office—Hannah Brinkley. She had recently been hired on as a secretary for his corporation. After running into her, literally, during her first week of employment at Remington Industries, Thad had worked his magic, having her assigned to his department. There was an air of mystery about Hannah that had intrigued him from the start. Since then, she had basically become his personal secretary, even though she assisted some of the other senior leaders on his floor as well.

“Yes… Of course we’ll have thorough testing performed on it before rolling the product out,” he agreed with the caller on the line. He pressed the mute button once more as Andrew Breckenridge began to ramble on about figures and results for the third time. He zoned out and again caught a glimpse of the beauty just beyond his door.

Remington Industries was good at what they did, and all the appropriate testing would be done as a standard part of the job. The only kind of testing that Thad was interested in at the moment, however, involved the curvy brunette with mile-long legs who was mere feet from his office. As soon as he’d had the lovely Ms. Brinkley settled into her workspace, he had moved his desk so he would be able to see her at all times out of his peripheral vision. That had turned out to be an even better idea than he’d first imagined. It certainly didn’t hurt that today Hannah had decided to wear a form-fitting skirt that clung to her slender legs.

During conference calls like the one he was currently on, his mind couldn’t help but conjure up images of those same toned thighs wrapped around his neck as he sampled her essence. There were a number of things he wanted to do to her and if given the chance, he would certainly not pass up a single one, if she was willing. Outside the fact that he didn’t know whether she would be able to handle his darker desires, he didn’t need a sexual harassment case. It didn’t mean that he couldn’t fantasize about her though.

Thad watched her straighten up as she stood, running her hands down the front of her black linen skirt. Feigning nonchalance, he made himself look busy, knowing she was headed into his office. The floral scent of her perfume mixed with a certain hint of spice alerted him to her presence seconds before she opened her mouth to speak.

“I’ve filed the latest proposals and cleared your calendar for the remainder of the afternoon, Mr. Remington,” she whispered to him when she realized he was on a call. A slow smirk quirked his lips and he stared intently at her for a few moments until she shifted nervously on her feet. “If there isn’t anything else, I did request leaving a few hours early this afternoon and that time off has already been approved.”

“I know, Miss Brinkley. I was the one to approve it for you,” he said. Hannah smiled at him and began to turn on her heel to leave. Clearing his throat, he added, “I’ll see you tomorrow, sweetheart.”

She flushed at the endearment and nodded before exiting his office. A low growl erupted from him as his eyes followed the swaying of curvaceous hips that framed her tight ass. Thaddeus could only imagine what he would see beneath the semi-conservative clothing she chose to wear, and his imagination was a very vivid one. If that day ever came, he would also get to hear exactly how loud her soft-spoken voice could get when she screamed his name in equal parts pleasure and pain.

“And when can I expect to receive that proposal, Thaddeus?” Andrew asked, causing Thad to sigh in relief as he unmuted the phone. It looked like this call was finally coming to a close.

“I’ll have that to you first thing in the morning. If there isn’t anything else then, I’ll talk to you later, Andrew. I’m pretty swamped here.”

Andrew assured him that there wasn’t and he finally hung up the call. Rising from his seat, he walked over to the floor-to-ceiling window in his office that overlooked downtown Atlanta. In a few hours, when the sun set over the city, he would have a million dollar view of the skyline that rivaled the one he saw each night from his industrial loft-style penthouse a few streets away.

I previously reviewed the individual novellas. This is a combination of my reviews. I could not put Obsession down. The chemistry was scorching hot. The writing was spectacular. I wish I was warned about...

Share what you thought about Nirvana Box Set and earn reward points.