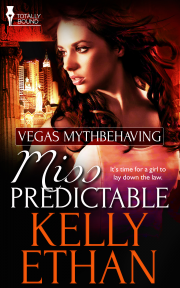 Book 1 in the Vegas Mythbehaving series

What’s the next step when a girl is forced to tell the truth and deal with crazy Greek gods? Have mind-blowing sex with a hunky god, of course.

Cassandra Troy comes from a long line of fortune-tellers and her mother is no exception. But having sworn off the business when her mother goes missing, Cassandra’s not impressed. She has to track her mother down before the family business drives her round the bend. But with strange accidents, an inability to tell a lie, a hunky hotel manager named Hermes and a host of people who swear they’re gods of mythology, the task might be harder than she thought.

It’s time for a girl to lay down the law.

“Oh, damn.” Cassandra flinched as a jagged blue bolt of lightning sizzled overhead. She planted her foot on the accelerator and roared up the curved driveway of the Olympus Hotel and Casino, praying she didn’t hit one of the many peacocks that wandered throughout the enclosed landscape.

Reaching the entrance foyer, she ground to a halt with a screech of brakes and, releasing the seatbelt, threw herself out of the vehicle. At least that was the idea. In reality her foot caught in the belt and she ended up on hands and knees on the cobbled courtyard. She scrambled to her feet and backed away from the car… Just in time.

A new lightning spear hit the roof of the vehicle. The hood flew open with a monstrous belch. Black smoke billowed high into the sky. A bellhop scampered past and screeched to an undignified stop next to the dying Chrysler, his mouth open as he stared at the charred mess.

Cassandra ignored him. Instead, she bared her teeth at the dark cloud hovering above what was left of her car and flashed a one-fingered salute at the gods. “Bloody hell. What next?” She raised her voice. “Any other natural disasters you want to throw at me?”

On the day her mother disappears, suddenly ferocious heat-seeking lighting stalks her? What storm follows a person at all, let alone from Chicago to Las Vegas?

Speak of the evil black in the sky… Cassandra cringed as another charge of lightning-fed electricity traced a path across the driveway then circled back behind the peacocks that clustered in a group in the shade of a nearby bush. The birds, already upset by the noise of the thunder, set up a frantic cry. Another follow-up flash was enough to send them in a last-ditch charge.

As one, the feathered flock raced across the driveway toward the apparent safety of the foyer. On the heels of another roll of thunder, the peacocks increased their pace until they bobbled like frantic aerobics instructors on steroids. As they reached the cobbled area in front of the open door, Cassandra found herself surrounded. She flung her arms out, trying to dodge the peacocks with little steps in an effort to get out of their way. A sharp beak prodded at her bottom and, with a shriek, she rubbed her offended posterior. Well, so much for that.

The birds surged into the building. Bellowed curses followed their entrance. Cassandra, along with the bellhop, moved closer to the door then peered inside. She couldn’t help but wince at the agitated peacocks attacking the many marble statues scattered throughout the lobby.

She hugged herself tightly around her middle and backed away. She grimaced and shook her head. Another apology. The list grew longer every minute. The car, the feathered freaks. But weren’t hotel employees trained for different kinds of situations? She wondered if killer storms were part of their training package.

Another question. Why did everyone ask questions?

“Everything’s fine. It’s just Beat On Cassandra Week.” Not a horrible answer. Twist her words a tad and no one got hurt.

Her run of bad luck had started seven days ago when her apartment had died as a result of storm damage. A deluge of water had descended on the apartment roof and flooded her place, making the building uninhabitable. No wonder the insurance company cursed the Troy name. She’d had no choice but to camp with her mom.

Cassandra curled her lip at her well-meaning-mother-avoidance plan. No paranormal interaction needed, just bury myself in work. Except three hours after she’d shifted into her mother’s one-bedroom apartment above the shop where she ran her business, Cassandra found herself without a job. Wouldn’t you know it? The library where she worked had closed owing to a mold and mildew problem.

Then what does Mom do? She runs off for a weekend away and here I am a week later—no parent in sight. Cassandra snorted. What was worse was that she was supposed to look after the business.

Her mother ran a little shop selling all kinds of occult paraphernalia. Old books, crystals, wands and a myriad other things people in the woo-woo trade seemed to think was necessary. Total bunkum, as far as Cassandra was concerned.

The main focus of the business, though, was her mother’s tarot readings and crystal ball gazing. And she’d been left to run it? Damn difficult when she didn’t believe in any of this bull. The shop she could have dealt with, but the rest? No way, no how! It felt too much like suckering people in and taking their money under false pretenses. In fact, the whole thing grated on Cassandra’s last nerve. It was time to drag her runaway mom back home and restore reality to its rightful place.

No matter the genre, Kelly loves kick-ass and sarcastic heroines who like to save the day and the hero.

Writing is her outlet for madness. She has worked as a library assistant and reviewed category romance novels. She moves regularly around Australia every few years and is a supernatural/paranormal TV junkie. She inhales paranormal, erotica, urban fantasy, science fiction and fantasy, middle grade, young adult, and military spy thrillers.

Thrown into a world that she never knew existed, Cassandra learns that she isn't the ordinary woman she though she was. A highly entertaining read, Cassandra is a very relatable character, and who doesn't...

Share what you thought about Miss Predictable and earn reward points.

Writing is a solitary job. Some of us have critique and writers groups and author cocktail hour (or is that only me?). But the actual sit your bum down on chair; fingers flying over keyboard and quality word count, can only be done by…me.

Miss Predictable is a paranormal romance novella set in the current time period in Las Vegas in America.

The short premise is Greek Gods have settled in Las Vegas, the city that never stops partying. But when you have powerful Gods and supernatural creatures living amongst human’s life gets complicated. And that’s the story of my heroine, Cassandra Troy. She’s just looking for her runaway fortune-telling mother. She never expected to deal with vengeful Gods, Demi-Gods, powers, strange accidents and the God, Hermes, possible love of her life.

Other books in the Vegas Mythbehaving seriesView Series Page