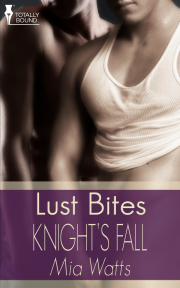 Andy's cavalier attitude about sex keeps his emotions safe, but when Knight moves Andy's heart, it's a game of trust Andy isn't sure he'll win.

The Senator has decided that interdepartmental tension can be alleviated by a week of team building camp exercises. No one is immune as the first group arrives comprising multiple government departments. Among them are FBI agent Andy Power and Detective Liam Knight.

Having met six months ago was challenging enough. After all, Andy made an idiot of himself. He's used to being the confident Fed who casually uses sex as he chooses. Some think he's too free, but Andy knows they're only seeing his persona. But Liam Knight is different. He's actually someone Andy wants a relationship with.

Liam thinks the klutz he met is kind of cute, if dorky. Yet the guy he has to partner with at camp is a bit on the cheesy side with slick come-ons and preformed ideas about Liam. Just when he thinks he can't stand the guy, Andy's mask slips away and leaves Liam breathless.

When the week is up, will Liam have cut through the bullshit or has Andy decided that trusting Liam with his heart isn't worth the risk?

Andy had made a move on him anyway. Call him a fairy godmother, but he hated to see men insecure about their relationships for no apparent reason. It’s why he’d made the play. A sleazy one for sure. Persistent and a bit bitchy, Andy had pushed Mack knowing that until he admitted he loved Geo, the couple didn’t stand a chance of weathering the very forward advances of Geo’s ex.

Okay, and if Mack had slipped up and slept with Andy, then Andy would admit he’d been wrong about the two and take one for the team.

As though sleeping with Mack could be a hardship, he thought, snorting to himself.

It was a service to struggling gay men that Andy provided. Claiming that identity and that of a crack FBI agent seemed a whole lot easier than just being Andy Powell, single man. Wearing the armour of the job was easy. Being himself and rejected for it sliced him to the core every time.

Thank God, Mack and Geo had each other. Andy felt more than a little bit of giddy pride for helping them.

Andy lifted his Cosmo, playfully swirling the pink liquid before taking a sip. Barbeque smoke drenched the air with savoury aromas and his stomach growled with appreciation.

Mack gathered the attention of his family and select friends by clinking on his mother’s drinking glass. Andy smiled, knowing from the flush of the handsome man’s cheeks what would happen next.

“No way. Not at a mixed barbeque. He’ll tell his family privately,” David Rook argued.

There were times when I wanted to grab and shake each character for their hardheadedness because they both wanted the same things, only had a much harder time gett...

I thoroughly enjoyed 'Knight's Fall'. It's a well written love story with a psychological twist, adding depth that other stories lack. I recommend it heartily.

Share what you thought about Knight's Fall and earn reward points.