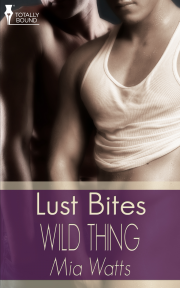 Jack has known Ryan for years, but he had no idea what a Wild Thing he was.

The residents of small Minnesota town, Libby, are used to seeing Timber wolves in their woods. But the sightings being reported to DNR officer Jack Allen are anything but typical. These reports indicate a huge species of the wolf, and they're scared.

Having grown up in the town, Jack knows just whom to ask for help, long time friend Ryan Walsh. It doesn't hurt that he's had a crush on Ryan for as long as he can remember.

As a wildlife photographer, Ryan lives in the woods and pretty much keeps to himself. He'd be perfectly happy to share that existence with a certain sexy DNR guy. So when Jack asks for his help in tracking a huge wolf, Ryan jumps at the chance to get Jack alone.

But what will happen when Ryan shifts into his canine form and Jack is looking down the barrel of his tranq gun?

Any excuse to look at Ryan was a good one. Especially at eight in the morning when Ryan was sipping hot coffee on the front porch of his log cabin.

Ryan shook his head, a slight move to the left and back. The mug pressed against his full lower lip, distracting Jack from his line of questioning.

“Is that all, officer?” Amusement coloured his husky tones.

Jack lifted his gaze and found the same twinkle in the depths of Ryan’s chocolate brown eyes. Jack’s partner nudged him. He blinked and felt the distinct rise of a blush touch his cheeks with heat. “Uh, no. If you see anything suspicious, give me a call?” Jack unsnapped his breast pocket, intending to give him a business card.

“I have your number,” Ryan murmured.

Ryan’s smile widened further. “You gave me a card the last time you were out here tagging red foxes. I keep it beside my phone.” His eyes flicked to Jack’s partner, Clancy. “I can call you the minute something comes up.”

He lowered his mug, the pale white porcelain gleamed in the bright sunshine as it broke the shade of the covered porch. Jack didn’t think he had Attention Deficit Disorder, but Ryan Walsh had a way of twisting small moments into sharp detail.

He wondered briefly if Ryan thought Jack had the mental acuity of a goldfish. Distracted by shiny things, goggle-eyed whenever Ryan spoke, lame words coming out of Jack’s mouth—God, he must seem like such a moron.

“Beginning to think you come out here just to check on me,” Ryan remarked casually.

An amusing tale of two longtime friends turned lovers. A hint of danger gave the story some added excitement...Mia did a good job on the world building as well as the characterizations.

Ms. Watts wields humor with all the finesse of an artist… truly...every story of hers that I've read—including Wild Thing—has the same wonderful mixture of humor and a totally blazing roma...

Share what you thought about Wild Thing and earn reward points.