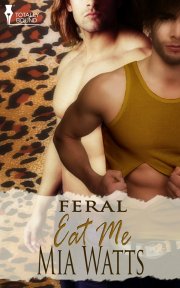 Fynn has waited four hundred years to be free of his curse, but a ghost from his past stands in the way and Eddie, his only ally, doesn't believe him.

Fynn Aren interrupted the inappropriate marriage of his younger sister to a much older man, resulting in a curse that transformed him into a Persian Lynx at the start of the Salem witch trials.

Unable to assume human form except twice a year during the Equinox week, Fynn has lived almost four hundred years, passed from generation to generation of the family who cursed him, waiting for the line to die out and his imprisonment to finally end.

Eddie Salem is the last in his line. Having inherited an exotic lynx with a distinct personality, he's baffled when he wakes up to a naked man sharing his bed. It doesn't help that his sexy bed partner claims to be his lynx, Fynn.

Fynn seduces Eddie, hoping to convince him to unleash the curse only to have it backfire in a big way. Add to that the manifestation of the first Salem who want to possess Eddie in order to live again, and Fynn has some choices to make. Free himself or risk everything to save Eddie?

Fynn Aren ducked his head as he followed Eddie Salem around the corner. Fynn’s hoodie covered his head, and he relied on the years of stalking prey to remain unheard, unseen. He kept his hands firmly fisted around the condoms in his pocket.

Dusk curled across the horizon between increasingly urban surroundings. Eddie stopped at one more light post and taped up a Missing poster. Like all the others, this one had a picture of a Persian lynx in profile. As the day had gone on, Fynn had grown more and more bemused.

A Salem, looking for me. It both pleased him and baffled him. Aside from Melba Salem, not one of the long line of the family that had owned him through the generations had been worth remembering. Eddie, seemed promising of goodness.

Fynn wasn’t one to take chances though. The Vernal Equinox had just begun, transforming Fynn from his lynx form to his human form for the week. He hadn’t expected Eddie to worry when he’d gone missing. But he had, and that had been enough to catch Fynn’s attention. The missing pet signs now up all over town were sweetly endearing, too.

Eddie slipped into a bar. Fynn followed a few minutes later. He sat a seat away from Eddie, wondering if the man would notice him. Fynn risked it to get closer to the man he’d only seen from the eyes of a lynx. Looking at him as a man sees, Fynn found him extremely attractive. Eddie’s quiet sensitivity had beckoned Fynn from the beginning, less than a week ago.

“You’ve been following me,” Eddie said quietly, lifting his beer to take a sip.

Fynn raised his eyes, looking back from the mirror behind the bar. Instinctively, he was glad that Eddie was aware of him.

“Have you seen my lynx?” he asked.

Fynn thought about his answer. He could say he had, but it would have been because he’d seen his own reflection moments before the equinox. Or he could say no, and risk ending the conversation too soon. He didn’t want that. He needed to get to know this new Salem. He was the last of the Salem line. The last to hold the power of the curse over him. The only one who could remove that curse and free him from an eternity as a cat.

This is a short, fun read about a man who has been cursed to spend his life as a lynx...A very nice read, with quite a few laughs for good measure.

Share what you thought about Eat Me and earn reward points.