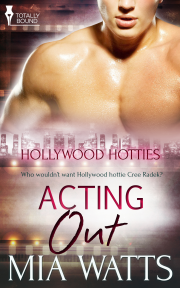 Book 2 in the Hollywood Hotties series

Who wouldn’t want Hollywood hottie Cree Radek? When Evan Walker, Cree’s assistant, gives in to temptation, he’s sure Cree only wants a one-nighter. Evan has plans of his own, and falling in love isn’t one of them.

Cree Radek is one of Hollywood’s hottest stars. He’s an unapproachable alpha wrapped in black leather and spikes with ice-blue eyes lined in black. He’s hard to read and all kinds of sex-on-a-stick.

Evan Walker works for Cree as his assistant. Long hours and living arrangements make it impossible to keep things professional. So, when things get steamy, Evan sees himself as an easy target. But for Cree, Evan is a lot more than a one-night stand.

Family business takes Evan away in the middle of filming. Cree says he wants him back, but can a celebrity be faithful to a regular guy?

Evan Walker rolled his eyes. One week on what was supposed to have been his dream job, and all he wanted to do was quit. But quitting wasn’t an option. Not only didn’t he have anywhere else to live, he hadn’t yet made friends in Hollywood to mooch off.

Unfortunately sticking around meant dealing with the apparent juvenile self-importance of one of Hollywood’s hottest actors, Cree Radek. And if he wanted to keep this job, he needed to hop to.

“I have it.” Evan held it up by the strap. “The car is waiting for you out front, and I’ve called ahead to have the trailer stocked with your favorite bottled water.”

Cree grumbled something under his breath. “Carry it for me. You’re coming with me today,” he said more audibly.

Evan didn’t like that sound of that. All day with Cree? Oh, hell, no.

Cree swung around to face him. His longish black hair didn’t budge from its spiky arrangement, and his kohl-lined blue eyes stared him down for a minute. He stood typically slouched in black jeans, a faded gray cotton shirt and a black leather, silver studded belt snug around his hips, dripping with chains. His long, lean form and broad shoulders dominated the doorway.

“Huh,” Cree muttered. He grabbed the bag from Evan. “Fine. Get your stuff together. I’ll send the car back for you.” Cree strutted out of the house.

“But my computer,” Evan called after him.

“Buy a laptop, Walker, and get your ass to the set. You’ll be joining me every day,” he yelled back.

Beautiful. There wasn’t anything he could say to change Cree’s mind apparently. And now he’d be stuck with him day in and day out until production wrapped on the latest flick. Evan groaned. If he had to buy a new laptop to satisfy the boss, so be it. He’d make damn sure it put a dent in the expense card.

It took him two hours to play around with every laptop on display, and ask all the important questions. Even the ones he already knew the answer to, because he was dragging his feet. He’d never been on set before and it wasn’t a prospect he was looking forward to. If the tabloids had it right, the ego-wattage alone would light the entire city of Hollywood.

What Evan most suspected is that the help, or anyone who serviced the Hollywood elite, would become the whipping boys tasked with ridiculous requests. All the responsibilities he already had maintaining Cree’s social, personal and professional calendars, along with managing his every need before he spoke it, would now include running to restaurants and arguing with directors about movie lines. Or buying completely unnecessary laptops.

At least Cree had remembered to leave Evan’s name at the gate, he thought, pulling through. He followed the convoluted directions provided by the guard and found a parking spot. Evan draped the identifying badge he’d been given by the guard around his neck, feeling even more like a dog on a leash. Heaving his work bag over his shoulder and the new laptop box to his hip, Evan began the long jaunt to Cree’s trailer. He should have taken the car and driver Cree had sent back for him, but there was something to be said for independence. The less he fell into Cree’s immediate world, the less of himself he felt like he was losing. Hollywood was a means to an end. Nothing more.

This is a 60 page novella about Evan Walker, an assistant hired to work for Cree a celebrity in the middle of filming a movie. All Cree wants is to be accepted as a person not a celebrity. And he thinks...

I was extremely impressed with this installation of the Hollywood Hotties Series. I loved Cree and Evan.

There is instalove situation, however, for once, it worked for me. This story wrench...

Share what you thought about Acting Out and earn reward points.

Let's start with you telling us a little bit about yourself, Mia.
I’m a single mom of two amazing daughters and a survivor of breast cancer. I firmly believe that life has enough challenge, therefore it’s my job as a writer to lighten things up. I find inspiration in my fans who have stuck by me through sparse book releases while I was in treatment. They encourage, love and cheer me on every step of the way.