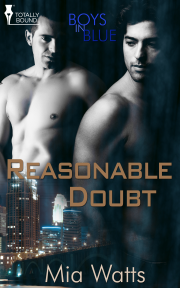 Geo and Mack have faced a lot of problems, but when the problem is within their relationship, will Mack come clean and claim his man, or lose him to an old flame?

Geo Wilson's feelings for his partner Mack Sullivan run deep. But formerly straight Mack grows distant when Geo's old flame, a former female detective gone FBI, comes to town to take over the lead on their case. Geo makes no effort to discourage the woman, and Mack wonders if he missed the break up memo.

Geo's apparent rejection hurts and Mack begins to have reasonable doubts about where they stand.

For Mack, taking the next step is a huge risk and one Geo has never taken before. Geo's friendliness with the former girlfriend could be a sign of changing affection. It wouldn't be the first time Geo has left a broken heart in his wake and Mack's beginning to wonder if he's just become another notch in Geo's belt. All that's left now is the case and as it comes to a close, will Mack and Geo catch the killer only to lose each other?

Reader Advisory: This book contains scenes of M/M intimacy, and is best read in sequence after Bad Boys, Bad Boys.

Mack Sullivan shared his grin, although he figured his version had a touch of curiosity to it. What the fuck was Geo on about? He turned, his eyes following the fluid stride of his lover as he moved towards a woman. Geo’s larger frame partially obscured her. Mack’s gaze stayed on Geo, the Dunne case file in his hands completely forgotten.

“Lauren. Holy shit. What are you doing here?” Geo asked, excitement and pleasure vibrating in his low husky tones. The same sexy tone Geo used on Mack when he was pleased...or about to get pleased.

Geo held her away, looking down into her upturned face like it held precious jewels. Jealousy left bitter bile in Mack’s throat.

“Look at you. Woman, you look amazing. Obviously being a Fed agrees with you. C’mon.” Geo took her under his arm and headed back towards him. “Mack, look who that cat dragged in.”

“Sully, you’re as hunky and as outspoken as ever,” she snarked.

He fucking hated it when she called him Sully. She knew it, too.

“What brings you to Maple Grove P.D.?” Geo asked, still oblivious to her subtle slam on his partner.

“That, actually.” She snatched the file out of Mack’s hands. “The little girl was taken after her correspondence with someone on the Internet. That makes it mine.”

“Aw, you still have that sulky pout. That’s a sexy look for you, detective,” she said, lifting a finger to nudge his bottom lip.

Mack swatted her hand away.

“Damn sexy,” he agreed, a slow smile pulling his lips into a kissable grin.

Mack nearly smiled with him, but someone might notice and they weren’t out yet as a couple.

Lauren’s gaze sharpened. She looked from one man to the other. Mack looked at the file as though he could read through the manila coloured card stock.

“What?” she asked, suspiciously.

Mack looked up at her, cocked a brow with disinterest. “You’ve got my file. I want it back.”

“No, not that. The other thing,” she said, now turning her attention to Geo.

Geo shook his head as though he didn’t understand her curiosity either.

“The look you just gave Sully. What’s that about? That’s not a typical look, that’s the look you used to give me when you wanted to haul me into the sack.” Her eyes widened, her mouth opened.

Geo discreetly lifted his hand off her shoulder and cupped it over her gaped mouth. “Hush now, baby. What you think you know, no one else does. Keep it to yourself. Got it?”

She nodded. Shock registered in her eyes, and Mack felt his chest swell with pride for his man, smugness at besting Lauren Stratton.

Just as casually as he’d done it, Geo lowered his hand from her face. His expression was warm and companionable. He didn’t seem affected by Lauren’s return. But Mack knew from experience that Geo was good at hiding his true feelings.

What was he feeling now, his arm around his old flame?

Anyone who’d been around the station for the past five years knew about Lauren and Geo. They’d been a hot item until she’d left him for the FBI. No warning. No Dear John letter. Nothing. She’d packed a suitcase and took off the next day. The bitch of it had been that she’d known she’d passed the testing and interviews for the position in the district office. She’d known and she’d still neglected to tell Geo she was leaving him.

Reasonable Doubt is everything you could hope for in a sequel...I literally screamed NO!" when I read the last word...I cannot wait for the next book in the Boys in Blue series!

What a great sequel to Bad Boys, Bad Boys...As usual all the drama, sensuality and relationship issues are tempered with humor as only Ms. Watts can provide...The character development is first rate...

Share what you thought about Reasonable Doubt and earn reward points.