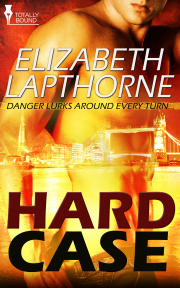 Troy has been recovering from an injury and is going crazy. Steven—one of the nurses helping him—has caught his attention in every way. When both men are dragged into a government conspiracy thanks to the consulting work Troy does, the men get thrown into a life-altering, intimate situation where the only way out is to rely on each other fully.

Troy Price has been recovering in the hospital. One of the Triage nurses, Steven Thompson, has caught his eye. Drawn into his consultancy work, Troy finds himself in way over his head. Steven, intrigued and protective, stumbles along with him.

All too soon Troy and Steven are dragged into the murky world of back stabbing, double dealing and where nothing anyone says is really how it seems. By the time they realize Troy’s contact may have double crossed them from the start—and sent two assassins after them and a parliament official—things spiral rapidly out of control.

Troy and Steven need to work together, fast, to try to find out what’s really going on. With danger lurking around every turn and with death the only easy way to defend oneself, Troy and Steven have to rely on each other and trust one another as never before.

Publisher's Note: This book is related to The Agency series but can be read as a standalone title.

Troy Price was reading what seemed like a mountain of discharge and aftercare paperwork. As a general rule, reading forms of any description was a task he hated with a passion, but today he didn’t mind it at all. Anything that got him closer to leaving this small, sterile hospital room was a good thing.

After spending a week here recovering from a bullet wound and some cracked ribs, he was desperate to escape. The papers seemed endless, even though he knew freedom was just around the corner. Still, he was determined to make it through to the end. When his phone rang, he was incredibly tempted to let it go—but force of habit had him putting his pen down with a curse.

Troy glanced at the screen and saw it was one of his few friends. He answered. Balancing the phone between his shoulder and ear, Troy continued to fill in the forms.

“Hi, Finlay, are you coming to pick me up?” He injected as much lightness into his tone as possible. He wanted out of this room and nothing would stop him.

Troy frowned. He and Finlay had worked on a few cases together, and while they considered each other friends, this was the first time Fin had ever asked for help. Troy found himself curious.

“It’s a long story and I’ll fill in the details later,” Finlay replied. “Suffice to say that I’ve met the most amazing woman—Emily—and we might have got ourselves into a spot of hot water. Can we lie low at your house for a few days until things blow over?”

“Fin.” Troy chuckled. “If this is you wanting to impress your latest shag—”

Troy heard the seriousness in his friend’s tone and stopped his teasing.

“This is completely different. She’s special. I’m in love with her—and we need help.”

Troy didn’t swing that way. He far preferred his bed partners to have hard, chiseled muscles, strong jaws and thick, long cocks. That didn’t mean he couldn’t appreciate the appeal of a woman, and more importantly, he’d never known Fin to speak about anyone like this. It seemed like Fin had fallen hard and fast for this Emily. Troy knew he’d help however he could.

“Of course, Fin. I’m almost done here at the hospital. I’ll text you when I’m nearly home and you and Emily can pop over and stay as long as you’d like.”

There was a pause. The unusual silence weighed heavily and Troy found himself looking up from the papers. There was something else, he could tell.

Fin cleared his throat. “I don’t suppose you’ve become…ah…friendly, with any of the doctors over there?”

“Emily was shot. She’s wearing a vest, so she’s only bruised, but I’ll feel better if she’s checked over first.”

Troy couldn’t wait to hear the full, longer-length story behind this. But he knew that would have to wait.

“I think I know someone I can recommend. Meet me here at the hospital and I’ll see what I can arrange. Then the three of us can go back to my place after and you can fill me in on what you’ve been up to this last week.”

“Mate, I totally owe you. That’s awesome. Thank you.”

“You mean you still owe me,” Troy replied with a smile.

Troy nodded and hung up. Wondering what mess his friend had embroiled himself in, he tried to push it to the back of his mind and focus on the paperwork in front of him. Satisfied with the discharge papers, he signed them and returned the pen to the nurse’s desk. Collecting the after-care documents and assorted copies of forms he needed to file at home, he then checked he had everything. Troy turned and set off down the sterile hallway, keeping his eyes peeled for a certain male triage nurse.

At almost six foot with dark blond hair and a light tan, Steven Thompson had the solid, bulky form of a boxer and was hard to overlook. After a few conversations, Troy had even found Steven had indulged in some real boxing in his younger days.

This quick 93 page read deals with intrigue, government cover up and love. It’s a fast paced who-done-it that is pretty easy to follow and solve, but the characters...

Share what you thought about Hard Case and earn reward points.