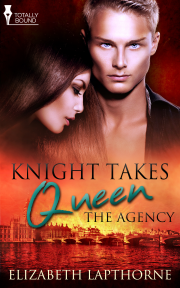 Book 10 in the The Agency series

Peter is at a loose end. Bored, he drops in to tease fellow Agent Jane Harvey only to find her fighting off a technical hacking attempt. Drawn into a decade-long conspiracy, both Peter and Jane need to dig deep and rely on each other to save the Agency.

Peter Abrams is used to charming and talking his way into—and out of—every situation. But he’s not so savvy when it comes to the technical side of things. Jane Harvey has never met a system she couldn’t crack, but even she is kept on her toes when a hacker attempts to steal archived files from the Agency.

They’re both drawn into the conspiracy, a deep, dark secret the Agency has been hiding for decades. Unsure who to trust, when even their own people might be involved, Peter and Jane try to treat this like any other case, but such delicate files are in play it’s impossible to know where to turn.

Drawn together, Peter and Jane have to trust themselves and each other or the explosive revelations might destroy the very Agency they both work for and love.

“Oh. Well aren’t you a sneaky little bastard?” Jane Harvey muttered to her computer screen as her fingers flew over the keyboard. Clacking filled the air of her tiny office. Leaning closer to her monitor, Jane moved her eyes as code scrolled past rapidly.

As one of the technology experts for the Agency, Jane enjoyed regularly pitching her talent against all sorts of twisted new systems. This one, however, took her by surprise at just how ingenious it was. Even as she watched, she saw the hacker mutate the code she’d inserted.

“Talking to your screen again, Jane?”

Jane turned for a moment and saw Peter leaning casually against her doorframe. Even as her cheeks flushed warmly, she forced her attention back to her computer. Though how she was to ignore how tall and well built he was she didn’t know. Peter was far too handsome—Jane had been crushing on the blond, blue-eyed man for months now. In pinstriped suit pants with a matching charcoal vest and blue shirt, Peter should have looked old-fashioned or stodgy but somehow he managed to look sexy.

“Sometimes it’s the only one who understands half of what I say,” Jane replied lightly as she continued to try and thwart her opponent’s attempts at slipping a Trojan into the Agency’s secure network. “I know I haven’t made the next move on our chess game. I’m sorry. I thought you were on leave. Isn’t Maria due to pop any day now?”

“No worries, I just wanted to duck in and see you. It doesn’t always have to be about our little game. But yes, I’m hoping they reassign a new partner to me before she gives birth. I’m a lot harder to fob off if I’m present rather than hassling on email or something,” Peter said.

Their online chess game—a thoroughly against the rules one to boot—had started out as a bit of a lark. Peter had been bored and roaming around. He’d noticed her playing a game by herself. That had been the first proper, non-mission related conversation they’d had. One thing had led to another and when she’d narrowly beaten him he’d immediately challenged her to a rematch.

That had been a few months ago and their friendship had blossomed with a healthy dose of competitiveness, too.

Peter came into her office and his large presence filled it immediately. He took the only other chair and sat next to her. Jane forced herself not to fidget. Even with her eyes firmly locked on the screen, she couldn’t help but be electrically aware of how close he was. She smelled the light, masculine scent of his aftershave and reminded herself she was in the middle of something. There wasn’t time to turn, stare, and drool over Peter Abrams right now.

“Heaven forbid you grow bored, Peter,” Jane teased him. “No wonder you never made it as a tech. It’s often days of humdrum banality then something like this pops up. I swear this time management has gone a bit far. I know we need to be tested, to be proactive in upgrading our systems. But really…”

“What have you found?” Peter leaned in closer and Jane caught her breath. He glanced at her and once more she found her face heating.

“Well.” She cleared her throat. “I’d only be guessing, but my money is on that new technician, Roger, flexing his muscles. I’m well used to everyone else’s bag of tricks and this isn’t something I’ve come across before. The coding is amazing and convoluted. Well finessed. The target is trying to insert a Trojan into our system and I’m fighting him off, corrupting his code in real time.”

“How do you know it’s Roger?” Peter asked as he peered at the screen with her.

Jane smiled. “Well, it has to be someone from in the unit. They were already inside our firewalls and safety systems when they tripped a flag and came to my attention. Every couple of months management tests us like this, sets us against each other to playact duking it out. It keeps us sharp and can be used as a tool to make sure we understand how to follow the Agency’s procedures and fail-safes even when under pressure. It’s an exercise for us, like your physical tests or training courses.”

“But how can you be sure it’s not just a very good hacker?” Peter pressed. “Don’t these exercises usually come with prior notice?”

“Well,” Jane paused, distracted. “Well yeah, usually. We’re never told the date or anything. But a general notice that sometime in the coming month…but, but this can’t be a real attack. They started inside the system.”

She heard herself repeating the last comment like a talisman. Jane stopped typing and looked directly at Peter for the first time that afternoon. Her insides froze as panic threatened. Peter’s cool blue gaze didn’t waver from her and for the first time since she’d met him Jane didn’t have the urge to run her hands through his thick, blond hair.

Peter is a field agent and takes it on himself to protect Jane when they realize the Agency is under attack, especially when Jane pulls the plug to protect Agency systems.  The chemistry between the...

Share what you thought about Knight Takes Queen and earn reward points.

Maybe it’s my inner nerd-girl, but I love a smart heroine. Nowadays we readers expect our heroines not to faint at the drop at a hat, or sit around in chains, miserable, waiting for their man to come get them. Yet I am still sometimes surprised by how seemingly intelligent female characters can turn pretty silly once the going gets tough.

Since I was a young teenager, I've had the fantasy of being a thief. Dressed head to toe in black, hair braided back and hidden under a knitted cap. I'd be picking locks and climbing into second floor windows to prowl around, steal some gorgeous jewels, maybe steal a kiss and a heated embrace with some handsome, dastardly man I encountered. I recall a number of lunch-breaks through my high school years that comprised of trying to teach myself how to pick locks.