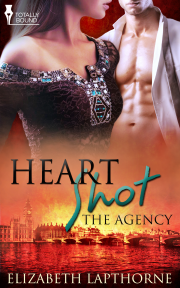 Book 9 in the The Agency series

Emily is a cautious assassin. While researching a target as a favor for a friend it all goes wrong, and she bumps into Finlay Mann—an Agent. A deep conspiracy has them only able to trust each other and risk their most venerable targets—their hearts.

Emily is an assassin—but one with a difference. She insists on checking out her targets herself, refusing to take a mission from her government contact—James—until she’s satisfied the person truly does deserve to die. She’s doing such research on a highly placed government man—a friend of the PM—when all hell breaks loose. The café Keyton Marshall is in is shot up, and Emily finds herself under attack.

Finlay Mann is with the Agency. He’s tagging along, playing bodyguard when what was supposed to be a simple, time-filling, routine job goes seriously south. After making certain his client is safely away, he’s drawn in by Emily. Together, they’re trying to piece a complex puzzle and discover who is being lied to, betrayed, and possibly with traitorous results.

Unsure whom either can trust, it’s the passion that flares between them that finally reassures them both they’re on the same side, albeit from different perspectives. Emily is ensnared by Fin’s loyalty and compassion, and Fin finds himself desperate to protect and support this fierce, hard woman who for too long has been able to rely on no one but herself. They both know the fatality of a heart shot, but each is helpless to resist the other.

Emily didn’t know what to make of it. Keyton Marshall sat in front of a market café, sipping a frothy cappuccino as if he didn’t have a care in the world. He was wedged between two men at a small table, both speaking earnestly to him, seeming to pitch something. All three of them reeked of upper class, perfectly bred business men. They all had near-identical clean cut looks, well-tailored three piece suits, polished-to-a-sheen shoes and even matching briefcases.

It wasn’t a stretch of the imagination to see each of them coming out of similar molds. The best schools, happily married with two point three children and the beloved family pet.

Was there some sort of secret handbook she’d missed out on?

Keyton listened politely to the two gents and didn’t appear at all bored. With his dark brown hair, brown eyes and thin-rimmed glasses, he seemed like almost any other businessman. Had she not known the power he wielded from his close connection to the Prime Minister she’d have thought him another banker, accountant or generic—albeit well-to-do—working stiff.

The pair appeared almost to tag team him, one picking up the thread the moment the other closed his mouth. With identical hand gesticulations and matching eager looks on their faces, Emily bet it was a major deal they were trying to pitch.

She’d almost come to the conclusion that Keyton wasn’t involved in selling secrets. But some inner instinct held her back from making a firm call on it. This was the fourth day of her following him and she couldn’t put her finger on what gnawed at the back of her mind. Marshall worked long hours in his office according to the tiny tracker she’d managed to hide under the lapel of his jacket.

Despite the late hour of his arrival home, every night this week she’d followed him. She’d witnessed the nightly ritual of him being greeted at the door with a steamy, loving kiss from his pretty wife and being climbed all over by dressing-gown clad children. Research had taught her that the son and daughter were six and two respectively, and that his wife of nine years seemed to genuinely love him and relished being a professional housewife.

Emily hadn’t been able to find any extra discretionary funds. Nor was there a hint of a mistress—male or female—whom Keyton kept in style. Indications of hidden tax benefits such as a beach house or real estate under a different family member’s name also turned up negative. While financial auditing wasn’t her forte, she’d become good at uncovering the simpler and more common methods of hiding untaxed assets.

Marshall didn’t fit any of the molds she was used to.

Many things held Emily back from calling James and accepting the job, but the most important was she believed in her own, personal, code of ethics. She had never yet killed an innocent person. Adhering to this code had become particularly important to her in the last few months as she questioned her actions.

One of the few things that had kept her going was the knowledge that she only killed those who deserved it. This was what helped her remain strong while she struggled with her doubt. Never once had she questioned the rightness of what she did.

The weight of doing such a thing would eat at her soul, destroy her slowly but surely. That sin would never be washed from her hands and would devastate her spirit more than anything else she could conceive of.

But Emily couldn’t figure out exactly what was going on here. Why would James send her after this man if he wasn’t selling secrets? James knew she tailed her subjects, surveyed them thoroughly and vetted every aspect of their lives. She never jumped in, accepting the money and killing without regard for her own beliefs. Emily couldn’t understand why James would send her after someone whom he wasn’t sure of.

James knew her well enough to know that if she found no evidence against the target, she’d never go through with the contract.

So why put Keyton Marshall in her sights in the first place?

Reviewed by Love Romances and More

The story focused on the relationship Emily and Fin had, as well as trying to stay alive and was a fast paced story that the author kept flowing pretty well. The main three secondary characters played...

Share what you thought about Heart Shot and earn reward points.

I’ve always been a little weird.

When my school teachers were being polite they would mention things like “Elizabeth marches to a different beat”, or that I have an “interesting” way of looking at things. Of course there were many similar remarks that were far less complimentary. But outside of school, I have to admit these aren’t the bad things they were always made out to be. Looking at life —or just situations — from alternate perspectives, or daydreaming “what ifs” are seen as strengths, not characteristics to be beaten out of my system.