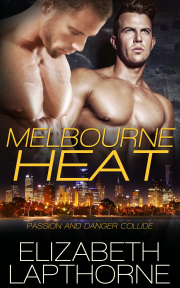 In the steamy Melbourne summer nights, two men meet by chance in the Botanical Gardens.

Spencer, against his better judgment, agrees to meet a new client in the Botanical Gardens. While waiting, he bumps into Charles, who is out paintballing with some mates. Spencer agrees to have a quick bite to eat with Charles, not knowing the sequence of events that will unfold from such a simple action.

Charles is a shifter with plenty of secrets and Spencer has unwittingly brought someone else into the mix—another shifter, eager to stake his claim. Even after such a short time, Charles can’t imagine giving Spencer up. He’s willing to fight for what’s his. Spencer has also found himself falling in love with Charles, despite the secrets that surround him. Passion and danger collide and soon both men will have decisions to make. Ones with serious consequences.

It was Charles’ favorite hour of the evening. The sun had just set, but Melbourne’s summer heat still shimmered on the air. The sky was a delicious royal blue that was slowly bleeding toward navy. The first few stars had come out twinkling. All up, it was the perfect night for a game of paintball.

Charles and a few mates had met earlier, just as the sun had begun to sink into the horizon. They’d agreed on which sections of the Royal Botanical Gardens were fair game and which ones were out of bounds. Scheduling a rendezvous at a particular gazebo near the pedestrian exit in three hours, they’d all gone their separate ways.

The rules were well known to them all and simple. Stay in the chosen area and don’t use their shifter talents except sight and smell. Whoever had the least shots at the end of the game was the winner. Lastly, the guy with the most hits bought dinner and drinks for them all.

Checking their watches were in synch, they’d each headed off. Ten minutes in and Charles had only shot a few balls and not been hit at all himself. Walking slowly on the grass next to the pavement, Charles enjoyed the scent of the fresh air, heavily tinged with the smell of leaves, freshly mown grass and fragrant jasmine. Twilight was falling. It wasn’t quite yet dark enough for him to get off the footpath, still light enough that the street lamps hadn’t automatically switched on, but the shadows were growing.

While the pedestrian track had wound between the trees and shrubs, the rolling, hilly lawns were the best chance of catching his friends unaware. But, until the light left, Charles knew his tall body created a shadow—which begged for his friends to catch him instead. Patience was the name of the game, he knew.

He paused at the base of a hill. There was a small stream with large stepping stones to cover it. The water was barely a trickle, and there were four pavers needed to cross it, mostly for the schoolchildren who flocked to the Gardens on field trips. Feeling whimsical, Charles jumped up onto the first rock and balanced on it. Not too slippery, there was barely enough water to cause concern should he fall. Charles sprang to the second stone and a rustling in the bushes snapped him to attention.

Raising his paintball gun, Charles instinctively leaped across the rest of the stream and landed in a crouch. He listened intently, his gaze sharp as he surveyed the bushes and trees in front of him. Caught in a bend at the base of the hill, the area was a perfect hiding spot, already in full darkness.

Charles twitched his finger, kept it hovering just above the trigger of his gun. He only had a set number of balls and he was loath to use them carelessly this early in the match. After the first sound there was nothing but silence, and the seconds dragged by with excruciating slowness.

When there was no further sound and no explosions of pain from being hit, Charles crept forward a step. Even with his extraordinary sight, Charles couldn’t see through the thick shrubbery. He sensed someone was hidden within. But if so, why weren’t his friends taking this opportunity to shoot him?

Perhaps it was a field mouse, a feral cat or a possum.

A twig snapped and Charles revised that thought. A stray animal would have frozen, then scurried away as fast as it could. That sound was from someone moving nervously. He would have thought his shifter mates could remain patient and not wriggle, but maybe they didn’t have a clear shot of him and were aiming for a better angle?

“Ashton? Hugo?” Charles called. He strained to catch even a glimpse of movement to indicate that he’d caught one of his friends by surprise. “Darren?”

Feeling faintly ridiculous now, Charles growled in frustration. He raced toward the bushes and crashed through the leaves, ignoring the twigs that scraped at his face and neck. His eyes were already adjusted to the gathering darkness, so when he came through to the small nook he was astonished to find a young man cowering on the grass.

This wasn’t one of his mates.

I enjoyed the courtship that Ms. Lapthorne gave us with this story. Spencer has baggage and it collides with Charles’s sexual needs. Can they find the patience and the courage to fulfill the needs...

Share what you thought about Melbourne Heat and earn reward points.

Let's start with you telling us a little bit about yourself, Elizabeth.
I’ve been writing for more than half my life. I love characters and when I see them in certain circumstances I’m always so curious about what happens next. How do they react? What do they do to get themselves out of (or into!) various situations. I have an insatiable curiosity and I just love knowing what happens next.