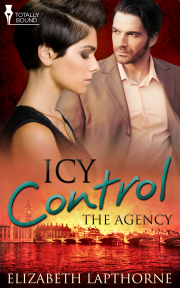 Book 8 in the The Agency series

Rob and Sally need to uncover an ancient secret. But he’s losing control—and loving it.

Robert Stevens has known Sally Langtry for almost his whole life. They’ve been friends forever, and he’s always secretly loved her. Sally, an artist, is so sweet he can’t possibly be the right man for her. She’s free-spirited, innocent and optimistic. Rob has always resisted bringing the darkness of his job, the horridness of what he sees day in and day out, into her life.

He is urged by his colleague, El, and his boss to turn to Sally for help in looking for a stolen Cezanne masterpiece. At a loose end and unsure where else to turn, he does so. El and her lover James recover the painting, but Sally’s curiosity is now piqued. She wants to tag along to study the work of art. Rob, always helpless when it comes to indulging her, agrees. Sally helps discover a series of codes hidden within the picture.

The action becomes deadly, but it’s too late for them to turn back. Rob tries to protect Sally, but he no longer has the legendary control he’s so used to working with.

Robert Stevens glanced up from his computer screen and swivelled around in his seat. Gary Waldron stood behind him, his back military-straight as he glanced at the currently empty desk of Rob’s colleague and work-partner, Eleanor Williams. Rob scratched at his jaw and hid the grin that wanted to peep out.

While Waldron was a good boss, matchmaking on the Agency’s time was not something he would have condoned. Far from being a fool, Rob knew that nudging El towards the man who held her heart was playing with fire—both with his friendship with El and by wasting the Agency’s time. He knew he shouldn’t have indulged, but El had been miserable without James.

Rob’s friendship with the fiery redhead was deep and strong. He and El were excellent partners and Rob doubted the not-so-subtle setting up job he’d done would have been taken with such grace had anyone else laid it out for her. Still, Waldron didn’t need to know the finer details, or not those that didn’t relate to their current case.

“El’s questioning an external source,” Rob replied. As far as it went, it was truth, just not the complete story. “She has an associate who has ties to the legitimate and greyer sides to the art world.”

“Still no sign of that damn Cezanne?” Waldron sighed.

Rob shook his head. “Not so far, sir. But it’s hardly been twenty-four hours. Calloway, Brown and Phillipe are all in custody and not going anywhere. That means everyone directly responsible for the attack on the National Gallery and the heist of the painting are out of circulation and detained with us. Our chances of recovering the Cezanne are really good. El is following a lead with James Waters and I’m here scrounging for any and all alternate routes of inquiry we can chase.”

Waldron huffed out a short laugh. “You sound like your damn report.”

The words weren’t sharp or annoyed, but the political weight coming from this case and the fallout from the attack on the Gallery was starting to wear on those involved.

“Give me something I can feed these vultures, Stevens. I have the Mayor on the line every hour and half, the damn aristocracy baying for the blood of those responsible for sullying the Gallery’s good name and reputation. I’ve told them we have custody of those responsible, but without answers to why this happened and the restitution of the painting, it’s going to get political and ugly very quickly.”

Rob nodded. He ran a hand tiredly over his short, dark brown hair. He and El had been woken up around three that morning when the second attack on the Gallery had occurred and all hell had broken loose. He’d not had a break since. He was starting to feel every minute of his thirty-eight years. No longer could he work thirty or forty hours in a row without pause—as the grey sprinkling at his temples now started to warn him.

“We’re on it, sir,” Rob said, unsure what else he could say. “El and Waters are chasing things up. I’ll call her for an update within the hour. I’m catching up on this morning’s reports and can have a preliminary summary in your email before the lunch hour is over if you wish.”

“Sometime before my three p.m. meeting is adequate,” Waldron conceded with a sigh. “I’d prefer to have some nugget to give them rather than a load of double-talk that means nothing. You and Williams are the best, though. Do us proud and prove it once more.”

Rob agreed silently. Waldron took a step then paused. His brow furrowed as he seemed to try to recall something, then turned to face Rob again. He had no idea why, but Rob braced himself as if for a verbal punch. Waldron didn’t disappoint, proving Rob’s instincts were as honed as ever.

“Didn’t you have a school chum who was a semi-professional artist? A pretty dark-haired girl. I recall my missus dragged me to a showing of hers for our anniversary a year ago and we bumped into each other there. What was her name?”

“Sally.” Rob cleared his throat when his voice cracked slightly. He didn’t need to think about which friend it had been—El was already on his case to go and chat to his oldest, closest friend. “Sally Langtry.”

He narrowed his eyes at Rob, searching his face. Rob maintained his bland, innocent expression. “Have you contacted her? Or is there a good reason not to? We need to pull out all the stops here. You understand that, right?”

“Of course. I’m keeping abreast of the information we have and then will contact Sally soon. She works late most nights and has another showing in a few weeks, so it would be rude to call her much before noon.”

Waldron took a telling and slow glance at his watch. “I’ll expect you to call her any minute now, as it’s almost half an hour past noon. By the way, my wife adores Miss Langtry’s work. When you have a date for her upcoming showing, I’d appreciate you giving me a heads up. I can curry some favour by getting tickets before Linda has to badger me for them.”

Rob grinned, appreciating Waldron lightening the mood and softening the order to at least outwardly appear more of a request than the command it truthfully was.

“Thank you.” Waldron clasped Rob’s shoulder in a friendly manner. With a quick nod Waldron continued towards his office.

Rob sighed when his boss was out of earshot.

Rob rubbed his face. The last thing he’d wanted was to bring this to Sal’s door. She had always been soft, innocent and eccentric. He’d been half in love with his high school friend since they were teenagers. Rob knew this was the main reason El had teased, poked and hassled him to consult with his whimsical friend. El was a firecracker, a damn fine detective and intense in most areas of her life. The very fact she’d not been subtle in her attempt to set him up and force him into to consulting Sally proved how strongly El felt that they’d be right together. Rob wondered whether he’d really detached his feelings so much that he’d convinced himself there was really no hope for him and the gentle artist.

This book was fast-paced and intriguing right from the start and it holds your attention to the end. It was a really good story. The suspense and action were really good and kept you engaged from the beginning....

Lapthorne did a wonderful job with the mystery surrounding the Cezanne.  Not only did she do a good job with that, there were lots of humorous situations as well as tragedy regarding the theft...

Share what you thought about Icy Control and earn reward points.

Three of my favorite reality shows:

I have really enjoyed Australian . I've always liked cooking shows in general (my grandma was addicted to them and passed on that love). And while there's a few I enjoy, Australian Masterchef seems to grab me the most. It moves at a fast pace, has some really out-there dishes and challenges and seems to have the formula right for holding my attention.