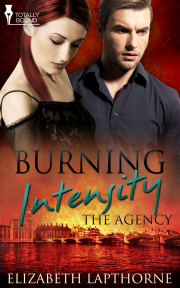 Book 7 in the The Agency series

El works for the Agency, fixing their toughest problems. James is a thief, and her ex lover. El is used to working through the messiest difficulties, but this might be too much for her to handle alone.

Eleanor Williams and her partner Robert Stevens have been called in to ‘fix’ the slight problem of a stolen Cezanne painting. Used to being assigned the difficult problems, El figures it’s another day at the office. Until she finds she needs an expert consultant. Someone used to the art world, and familiar with the criminal mind of a thief.

The relationship between them is messy, nothing like what she’s used to on the job. But with other agents involved in the successful resolution of this problem, she can’t afford to let personal hassles impede her work.

As she spends more time with James, she discovers he’s still the same man she loved to distraction, but he’s also far more layered and complicated than she could have guessed. Facing challenges in her usual forthright manner, she can only hope that he can keep up with her as the situation becomes even more convoluted. And as for the burning intensity that flares between them… Who said life should be easy?

“This is the only chance you’ll be given to avoid rotting in jail for the rest of your life,” Eleanor Williams said as she walked into the cramped interview room. Her Agency partner Robert Stevens came in a few paces behind her.

The room was typical of any one of its kind around the world. Three bare, slate grey concrete walls kept the light from the florescent bulb quite dim. The fourth wall held the traditional one-way mirror. Any fool knew exactly what that mirror signified—that victims, family or management watched the discussion without wanting to be seen.

The thermostat controls remained perpetually a few degrees cooler than was considered comfortable. It was a purposeful, psychological prod to keep those being questioned off kilter. As part of her questioning technique, El frequently found it useful to be able to offer to turn the temperature higher when she wanted to appear courteous—the traditional ‘good cop’ routine.

Thaddeus Brown, however, seemed almost at home in the cool, depressing box. The solidly built, blond man lifted his gaze to meet hers as she faced him across the thin aluminium table. El knew her petite, short frame rarely intimidated anyone, let alone well-muscled, hardened thugs like Thaddeus.

Words, could be quite powerful. El had long ago learned to wield them as sharply as any sword. She also knew her well-deserved self-confidence came across strongly in her body language. When needed, she could back up her physical self-assurance with actions. She worked and trained hard to keep in top shape and knew enough about a body’s momentum to more than adequately make up for the difference between criminals who could be twice her size.

El didn’t need to see behind her as the door thudded softly closed. She and Rob had worked together for years, been friends and partners for more than half her career. Trust bound them together more tightly than many lovers or siblings. Rob would almost certainly be leaning against the door, or wall, relaxed and appearing supportive and confident in her interrogation skills. At six foot four, he towered over practically everyone, but his height was always highlighted when he stood near her.

Powerfully built, Rob could have had almost any physical job he desired, from professional rugby player to a sleazy pub bouncer. Dark hair showed the first, faintest traces of grey, and his warm brown eyes could be frighteningly hard when Rob wished it so.

Sometimes he affected a bored look during their interviews—El knew that was a favoured deception of his. Rob never lost focus, always tracking everything and retaining it for analysis later if needed. His control was icy and complete. She was a perfect counterpoint for him, her long, straight red hair being blamed for her passionate nature and usually fiery impatience.

They both knew with certainty that she could be patient and calm when needed, cool under fire. But she enjoyed getting information from reluctant people—the play of words, the dance and parry of matching wits. Rob plotted and planned—she reacted on the fly. As working partners, they were suited perfectly, their skills complementing and completing one another.

She loved him like a brother, trusted him unlike anyone else. Most of the time they were totally in synch, working as a pair and putting the worst of the bad guys away. While she loved Rob, it would never be a sexual thing—for either of them. El felt proud to defend her country, to do the work they did. It gave her a buzz she couldn’t find any other way.

She rested her palms down on the table, then leaned in close, until her face was right up in Thaddeus’ personal space. He met her gaze steadily, clearly unafraid of her or the power she wielded in this room.

“Why don’t you start at the top,” El cajoled. “Tell me everything.”

El kept her gaze steady on Thaddeus. He watched her with an unblinking stare. El could see the reflection of her pale face in his orbs. They were now close enough that she could feel the faint puff of his breath as he exhaled.

She remained silent, letting the weight of the situation press down on him. After a full minute of mental fighting, Thaddeus scraped his chair back and put distance between them. Metal clinked—the cuff’s chain knocked against the arm of the chair Thaddeus sat in.

His putting space between them was a small win, one that pumped adrenaline and more confidence through El.

Thaddeus ran a hand through his scruffy, sandy-coloured hair. She could see in his eyes that something wasn’t right. Over the years, she’d interviewed, interrogated and taken down countless criminals, many of them murderers with no conscience whatsoever. That hard, blank emptiness was something one couldn’t overlook. After so much exposure to such people it didn’t make her shiver anymore, or even blink.

El didn’t move as Thaddeus ran his gaze slowly down her petite frame. She could feel the weight and heat in that glance, knew he was weighing her worth, judging her as a woman and an agent. El remained cool and calm. She’d been checked out by far creepier men than this. Her skin was thick and her tolerance for slime was high.

Any indication or acknowledgement would give him a sense of power and satisfaction. She watched him steadily, ignoring his lazy enjoyment and giving no outward response to him at all. But the more she surveyed him, the more she realised he wasn’t the ordinary, garden-variety psychopathic killer she was used to. A vibe resonated from him, slowly filling the room.

A lady spy and a gentleman thief team up to locate a stolen painting and rediscover a passion that could have been lost with time.  Burning Intensity brings El and James back together to...

The author's writing style is conversational and addictive. Lapthorne does a first-class job weaving the thoughts, emotions and animated descriptions of each character in the story giving them depths from...

Share what you thought about Burning Intensity and earn reward points.

Burning Intensity has been nominated for a BTS Red Carpet Award in the Mystery/Suspense category!