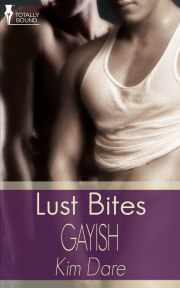 A gay-ish submissive and a very gay dominant. Gay Pride rallies have never been so much fun.

When Langford sees Tayton lurking in the rain opposite a gay pride rally, he couldn't be more thrilled that the cute guy from the sandwich shop is finally prepared to come out of the closet.

Tayton isn't so sure he's all that ready to come out. Technically, he's not even sure he's entirely gay—even if he has had a crush on Langford for months.

Reader Advisory: The stories in this series are connected solely by theme. They can all be read as stand alone titles and read in any order.

“Please tell me you’re not still staring at that same boy?”

Ben Langford made a noncommittal noise in the back of his throat, in the vague hope that his friend might be satisfied with the non-answer and let him go back to staring at the young man on the other side of the road in peace.

“He’s probably just waiting for the damn bus,” Paul said—not for the first time that afternoon.

“Probably,” Langford allowed. The boy was probably just sitting on the bench by the bus stop in the rain because he was waiting for a bus. It was a perfectly reasonable explanation.

Still, Langford couldn’t quite bring himself ignore the fact that there was another, equally plausible, reason for a man to linger opposite the park that was currently hosting the town’s annual gay pride rally. It was just possible, that the younger man wasn’t waiting for a bus, but for the courage to step out of the closet, cross the road and join in the fun. It was that, somewhat tentative prospect, that had kept Langford glued to the view across the road for the last half an hour.

“The question you should be asking yourself,” Paul informed him. “Is—would you still believe he wasn’t waiting for a bus if he didn’t look like just your sort of cute little blond sub?”

“You’re going to get soaked to the skin for nothing,” Paul warned.

And if he dropped in to flirt with the other man one more time, Langford was pretty sure he was going to turn into a damn sandwich. The chance of seeing him without a sandwich in his hand was too good to pass up just because he might get a little damp.

Gayish is a sweet,, memorable read and a great addition to the G-A-Y series.

Share what you thought about Gayish and earn reward points.