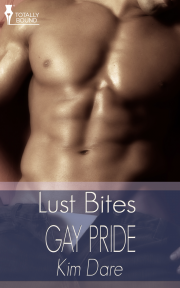 A naked submissive and a rainbow coloured flag, what gay dominant could resist?

Crenshaw hasn't had much time to hit the leather clubs since he got really involved in the gay pride movement, but when he finds a drunken submissive standing on his doorstep wearing nothing more than a rainbow coloured flag, it's obviously time for him to get back into the game.

Jayden might not be really into the whole gay pride thing, but he's very proud of his plan to get Crenshaw's attention. All he has to do now, is convince the older man to keep him around once he's sobered up.

Reader Advisory: The stories in this series are connected solely by theme. They can all be read as stand alone titles and read in any order.

The young man was naked, bar the rainbow coloured flag. He’d wrapped the material around his shoulders and draped it over his body, but as the wind caught at the edge of the fabric it was impossible to miss just how bare he was behind the scant covering.

Mr. William Crenshaw looked his visitor up and down and quickly came to the conclusion that he’d never seen him before in his life. He’d have remembered a face like that. Bright blue eyes peeked out from behind a messy mop of blond hair as the breeze blew the several golden strands across the boy’s face.

As he reached up to push his hair out of the way, the boy almost lost his grip on his flag. Crenshaw caught a glimpse of beautiful lines of slim muscle before the younger man pulled the fluttering fabric back into place. He’d have remembered a body like that too.

Crenshaw pulled his attention back up to the other man’s eyes. “Hello.” He waited for the other man to say something else, perhaps even to present some explanation of why he was standing on his doorstep. The guy offered him a hopeful little smile, but that seemed to be the only contribution he intended to make to the conversation.

Holding back a sigh, Crenshaw looked past the man who’d rung his door bell and glanced both ways along the quiet street. The car he expected to see parked a little way down the road wasn’t there. At least, there was an unfamiliar car, but it didn’t contain any of the men he’d assumed that it would.

On the positive side, the vehicle didn’t contain any paparazzi either. That was something to be grateful for, at least.

Crenshaw’s visitor turned and followed his gaze. “Were you expecting someone else, sir?” He sounded quite worried about the possibility.

“No, I wasn’t expecting anyone.” He’d actually been quite content with the prospect of some peace and solitude after a day filled with meetings crammed full of men who thought their point would carry more weight if it was shouted very loudly.

Gay Pride by Kim Dare is a fun-to-read sexy comedy.

The only thing wrong with Ms.Dares latest in the G-A-Y series is that I liked it so much I wanted it to be about ten times as long...and even then I would have wanted to read it over and over!!

Share what you thought about Gay Pride and earn reward points.