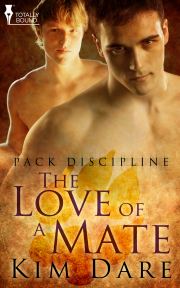 The Love of a Mate

Book 4 in the Pack Discipline series

Alfred's always been the pack's trouble maker. He's given up hope of ever being anything else. But, could that change when he suddenly receives the love of a mate?

Caden's never had any trouble convincing other wolves to do what he wants. He might not have his brother's status, size or grumpy personality, but that doesn't matter. He's always found smiles and flirtations to be far more effective than any of those things anyway.

When Caden sets his sights on Alfred, he knows he'll need every trick he's ever acquired if he's to have any chance of reforming the pack trouble maker into a good wolf and a first-rate potential mate. However, that might not be the only obstacle they face—the rest of the pack might yet prove to be their biggest challenge of all.

Reader Advisory: This book is best read in sequence as part of a series and also contains scenes of non-sexual violence.

Halfway through his shift from his lupine form into his human shape, Alfred sensed someone approaching from his left. His shoulders were barely formed when a blurry figure pushed against them, sending him staggering backwards.

“What the hell do you think you’re—?”Alfred stopped abruptly as his back hit the wall alongside the woodpile. All the air rushed out of his lungs, stealing any other words he might have wanted to snarl at his attacker.

The rough bricks bit into his suddenly furless skin, his palms skidded against them as he tried to catch his balance on two legs instead of four. So soon after a shift, his movements were clumsy, his co-ordination non-existent. It was several moments before he could even make his eyes focus on the man standing before him and the blur morphed into—

Alfred glared at the other wolf in disbelief as the pretty blond stepped forwards, closing the gap between them.

It was bad enough having to put up with being pushed around by Gunnar. Alfred would be damned if he’d allow the beta’s little brother to treat him the same way! A low growl building in the back of his throat, Alfred reached out to shove Caden away.

His hands quickly reached the place where the other shifter’s shoulders should have been, but his claws only met empty air. There was no howl of pain as Caden stumbled and fell from the force of the blow.

A second passed slowly. One brain cell bumped gently into its neighbour inside Alfred’s head. Werewolves didn’t just disappear—they shifted. Alfred looked down, fully expecting to see a wolf looking back up at him, but Caden was still very much in his human form.

The gorgeous young wolf knelt prettily at Alfred’s naked feet and retuned his gaze as if that were nothing out of the ordinary.

Bloody bizarre was what it was. Alfred frowned as his sluggish brain tried to make sense of it and failed. He lowered his hands, not above striking someone who was already on his knees.

Caden leant forward. Without any warning, a pair of perfect pink lips wrapped themselves around the tip of Alfred’s cock. For several long seconds, Alfred waved his hands uselessly in the empty air, as they stalled halfway to their destination. A strangled noised escaped from the back of his throat, but not one single thought managed to work its way through his brain.

Hot wetness suckled firmly around the head of his cock as Alfred quickly began to harden under its ministrations. A wave of pure bliss swept through him when Caden swirled his tongue in a complex little manoeuvre that lapped away all his strength.

Alfred’s knees threatened to buckle. If the wall hadn’t been ready to support him, he’d have crumpled into a desperate heap right there next to the woodpile. The deep scratches the rough surface gouged into his back were a small price to pay for being able to keep his cock at the right height for Caden’s mouth.

Delicate hands came to rest on Alfred’s hips, steadying him further. Alfred tried to thrust forwards as Caden dipped his head and took a little more of his cock into his mouth, but there suddenly seemed to be surprising strength hidden in the slim, artistic digits. His hips stayed firmly against the wall.

Growling his frustration, Alfred glared down at the other wolf. Their eyes met. For once, those stunning blue eyes seemed to be completely serious. Alfred was incapable of looking away. No matter what his place in the pack was supposed to be, he was helpless to do anything other than hold the other gamma’s eyes and lose himself in the blue depths.

Caden looked away first, but it felt far less like a wolf offering another man his submission then a master technician dropping his eyes to pay better attention to the job at hand—or mouth, as the case may be. Gradually, Caden began to bob his head lower, taking more and more of the now-stiff shaft into his mouth.

His tongue danced along the underside of Alfred’s cock each time he dipped his head. As he pulled back, he swirled his tongue around the glans, before rapidly taking the entire shaft back into his mouth, the tip sinking into his throat.

Without any warning, Caden looked up again. Caught off guard, Alfred could only whimper his admiration. The other wolf’s lips were thinned out into a pale pink line, his cheeks slightly hollowed as he sucked, and somehow it all just made him more gorgeous than ever.

Alfred reached out, desperate to thread his fingers into the impossibly golden strands of hair and keep Caden exactly where he was forever. He was vaguely aware that one of the other wolf’s hands had left his hip, but before Alfred had even had a chance to really notice that, Caden’s fist was wrapped tightly around his wrist.

“What the—?” Alfred tried to say more, but words failed him as Caden’s tongue lapped at the sensitive strip of skin where his foreskin joined his shaft.

As if nothing at all had happened to break his concentration, Caden calmly resumed bobbing his head over Alfred’s crotch. At the same time, he guided Alfred to lean forward and rest his hand on his shoulder rather than in his hair. Alfred found his fingers clutching at the thin cotton shirt as he tossed back his head and howled his pleasure into the cold night air.

His hips bucked forward, and Caden was strong enough to stop him then. Alfred’s vision blurred. The whole world condensed down into something more glorious than he could ever remember it being. Every fibre in his body whimpered its joy. Even his fingertips seemed to feel their share of his bliss as he came into his lover’s mouth. Then, long before Alfred was ready to let go of it, the ecstasy faded away.

It could have been mere moments before he opened his eyes, it could have been hundreds of years. Alfred’s brain wasn’t working well enough to deal with complicated concepts like time. All he knew for sure was that Caden was still kneeling at his feet and suckling gently around his softening shaft when he finally managed to blink down at him.

Caden’s eyes were peering back in return at him, apparently studying his every reaction very carefully. Seeming to realise Alfred was back with him, he leant back and delicately allowed Alfred’s shaft to slip from between his slightly swollen lips.

Kim Dare knows how to write shifter stories and Love of a Mate is one of her best...This is a great conclusion to the Alfred story arc and comes with a sweet HEA.

Kim Dare wrapped up this series wonderfully...full of tension, angst, and shows the power of love and trust. Alfred and Caden's story is a wonderful ending to a great series.

Share what you thought about The Love of a Mate and earn reward points.