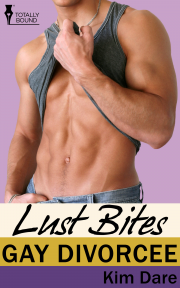 Book five in the G-A-Y Series

Grayson gave up on the idea of gay marriage when he became a gay divorcee. Can Jones remind him that not all gay men are like his cheating ex?

Gay marriage, civil commitment and equal rights. Jones doesn't care what it's called. He wants that security to be part of his future, and he wants it to be available to everyone else too. He's happy to tell his dominant friend Bernard, and anyone else who will listen, how wonderful it will be when every gay man can live happily ever after with the man he loves. Gay divorce, cheating husbands and bad decisions. Grayson used to think that the right to marry another man would cure all gay ills too - until he married and divorced Claude. The adorably submissive Jones obviously needs someone to explain to him exactly why gay men should never get married before he makes all the same mistakes Grayson made.

Before the Christmas celebrations end, someone will have to accept that they are wrong and the other man is right. The only question is who?

R. S. Jones turned his attention from his friend Bernard to the dominant sitting next to him. “Sir?”

The older man tossed back another shot of whisky. “Dragging yourself halfway around the world to volunteer on a campaign for gay marriage is pointless.” He lifted a hand in an idle gesture, and one of the submissives serving in the club refilled his glass.

Jones adjusted the cushion he knelt on, playing for time as he tried to work out what exactly what the dominant was objecting to. Looking up a moment later, he met the other man’s gaze. Vivid green eyes locked with his, unblinking and damn near heart stopping.

Jones quickly dropped his gaze. “I know there’s still a lot of opposition to any form of gay marriage in some parts of the US, sir,” he began, quite ready to explain why that was no reason to give up.

“And so there should be.”

Jones stuttered. One glance up and he got caught in those green eyes again. He tried to pick up his train of thought and failed. “Sir?”

The dominant pushed shaggy strands of blond hair back off his face as he leant forward in his chair, his eyes sparkling with intensity.

“The reason so many people oppose gay marriage is because gay men shouldn’t get married,” he announced. “We don’t need to help the US legalise marriage, we need to turn the clock back to when civil-commitment was illegal in Britain too. Gay men and marriage don’t mix.”

The dominant tossed back his shot and dismissed everything Jones was about to say with a sweep of his hand as he ordered his glass to be refilled again. “Nonsense!”

Jones’ frown deepened. Fascinating green eyes were very nice. Hair so blond it made references to golden corn sound logical was great too. On a man who radiated dominance, they were even better. But dominant or not, a jerk was still a jerk.

Kim Dare adds just a touch of sensual play between the men to make the story tantalizing. I found Gay Divorcee to be an enjoyable read and a wonderful part of the series.

This is a very sweet Christmas tale about the healing power of love. It has the right dose of kinkiness in the D/s relationship, but it's a very light shade, that will not discourage the reader...

Share what you thought about Gay Divorcee and earn reward points.