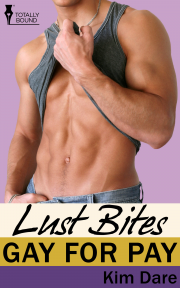 An experienced gay dominant, a gay for pay submissive and an auction. Let the bidding commence!

Smith has a job to do. As chief of security for the Lockwood family, it's his responsibility to track down his boss's brat of a son and bring him home. The fact that his search leads to the kind of leather bar he considers beneath contempt is not important. The fact he's been fantasising about being Nate's master since he first set eyes on him isn't relevant.

The plan has to work. The job has to be done. And the bidding starts now…

Ben Smith scanned the crowd for a third time. Every light had been turned towards the stage at the far end of the club, leaving the audience in shadows. He nudged his way through the press of leather clad bodies, trying to pick out one face from the dozens surrounding him, to spot one head of blond hair in the gloomy light.

Smith looked down as he kicked against something. A submissive knelt ignored in the middle of the crowd, while the dominant holding his lead watched the action on the stage. Smith sighed and stepped around the submissive, pushing aside his desire to slap the so-called dominant around the back of the head and remind him to take better care of his property.

Right then, he had more important things to worry about than the fact there didn’t seem to be one good dominant in the building. Things like bringing his boss’s brat of a son to heel before he caused a scandal that would send his father into palpitations.

Smith muttered a curse. He was going to kill him. It was the only solution. He’d throttle Lockwood junior and be done with it—but not before he tracked down whatever idiot first suggested he go into the private security business when he left the police force, and throttled him too.

Nate Lockwood wasn’t anywhere to be seen. Smith bit out another curse. So much for reliable information. So much for ‘I saw him go into the club with my own eyes’. Smith added another name to the long list of people he’d like to grab hold of by the neck.

It was a relief to know Nate wasn’t part of the screwed up version of dominance that seemed to thrive in the club, but a larger part of Smith howled its protest at not knowing where the younger man was, at not knowing he was safe.

A microphone buzzed back into life as another submissive was shoved up onto the stage to take his place on the auction block.

Smith glanced at the stage. The submissive was wearing a half-mask. It didn’t extend far enough down his cheeks to stop his blush being visible, but it was still by far the largest article of clothing he wore.

A tiny leather posing pouch just about covered his cock. A collar marked him out as one of the submissives being auctioned off that night. Cuffs wrapped around his wrists and held his hands behind his back. But everywhere else was just bare skin.

This was so far the most touching of the series. Nate was so sad and lonely, you just wanted to wrap him and protect him. Smith was so strong and a touch lonely that you wanted to jump for joy when...

Share what you thought about Gay for Pay and earn reward points.