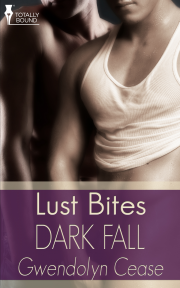 Max wakes up in a realm not his own, but Darke is there to protect him in any way he can, even if it means taking the human to bed all night long.

A marine unit is on assignment to clear terrorists from caves in Afghanistan. An explosion later, Max Whitfield is being sold as a slave in the daemon realm of Thorash. He doesn't know where he is, but one thing he does know, he is no one's slave. When a fight breaks out, three men from Max's unit escape, but he is stung by toxic venom that will kill him as it brings excruciating pain.

Darke, a Carthus daemon, is part of Thorash law enforcement. His current assignment is to stop the illegal import of humans to be sold as slaves. Instead of meeting his contact, he rescues Max from certain death and takes him back to his home. The only thing that will save the human is hot sex all night long.

When two warriors, who have nothing in common, find themselves thrown together, they will do what they must to complete the assignment. Even if it means giving each other up forever.

Lorem Max Whitfield moved silently through the dawn’s light. A breeze kicked up sand and he subtly motioned for his team to stop. They were finally in position. Max cradled his weapon close and went into a crouch waiting for the signal to go.

Max, as one of the senior officers with the longest time served, was patient in the extreme. He’d been a Marine for nearly fourteen years, joining as soon as he’d gotten out of high school at seventeen. He’d done two tours in Iraq and was now on his second in Afghanistan. And for the first time, he was bone deep tired. He planned to request a rotation home after this tour, but didn’t think they’d give it to him. Someone with his combat experience wasn’t easily let go. All he wanted, though, was to sleep for maybe a month. He’d be good to go again after the break. At least he hoped he would.

To stop the thoughts, he tapped his communication device, “Yo, O’Neal.”

Keira O’Neil, strangely enough, was one of his best friends in the unit. He couldn’t care less that  she was a woman. She was a damn fine Marine, and someone he wanted at his back. Her instincts were almost as good as his own, and his were telling him serious shit was heading their way.

“You got anything?” he asked, scanning the desolate landscape.

“Negative. Nothing moving out here, but the sand.”

“I got a gut feeling something’s hinky. Don’t know what though.”

He heard their commander give the order to move into the next set of caves. Max motioned to the two men behind him and began to advance. This was the most dangerous time, where they could be spotted at any moment. He worked his way forward, straining all his senses to ascertain what was eating at him. Though he couldn’t see or hear anything strange, his gut told him to turn and run.

Gwendolyn Cease has been writing ever since she was old enough to pick up a pen. From the very beginning, her stories involved handsome heroes, tough heroines, and happily ever after. Even as she slogged through her undergraduate and finally master's in education, writing remained a top priority. Though she now teaches elementary school, she still makes time for her characters and their never-ending adventures.

Currently, Gwendolyn lives in Kentucky with her three incredibly spoiled cats and one yellow Lab, who somehow thinks she's a cat. If you'd like to contact her she'd love to hear from you. She loves to hear from anyone who enjoys a good book, especially the ones she's written.

Dark Fall was an intense ride from the beginning to the ending...I would recommend Dark Fall to everyone who likes sexy demons and ever lasting love.

Share what you thought about Dark Fall and earn reward points.